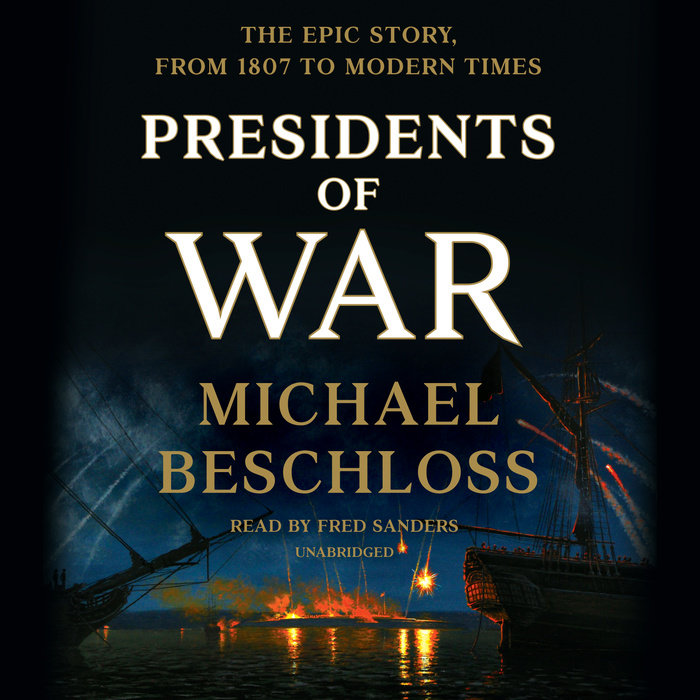 Widely acclaimed and ten years in the making, Michael Beschloss’s Presidents of War is an intimate and irresistibly readable chronicle of the Chief Executives who took the United States into conflict and mobilized it for victory. From the War of 1812 to Vietnam, we see these leaders considering the difficult decision to send hundreds of thousands of Americans to their deaths; struggling with Congress, the courts, the press, and antiwar protesters; seeking comfort from their spouses and friends; and dropping to their knees in prayer. Through Beschloss’s interviews with surviving participants and findings in original letters and once-classified national security documents, we come to understand how these Presidents were able to withstand the pressures of war—or were broken by them.

Presidents of War combines this sense of immediacy with the overarching context of two centuries of American history, traveling from the time of our Founders, who tried to constrain presidential power, to our modern day, when a single leader has the potential to launch nuclear weapons that can destroy much of the human race.

Praise for Presidents of War

"A marvelous narrative. . . . As Beschloss explains, the greatest wartime presidents successfully leaven military action with moral concerns. . . . Beschloss’s writing is clean and concise, and he admirably draws upon new documents. Some of the more titillating tidbits in the book are in the footnotes. . . . There are fascinating nuggets on virtually every page of Presidents of War. It is a superb and important book, superbly rendered.”—Jay Winik, The New York Times Book Review

"Sparkle and bite. . . . Valuable and engrossing study of how our chief executives have discharged the most significant of all their duties. . . . Excellent. . . . A fluent narrative that covers two centuries of national conflict.” —Richard Snow, The Wall Street Journal
Read More
"In this brilliant work, Michael Beschloss burnishes his already bright reputation. He tells a gripping tale of courage and mendacity as well as recurring defiance of the constitutional requirement to seek congressional approval for making war. A monumental and profoundly important achievement.”—Ron Chernow, Pulitzer Prize-winning author of Grant

“A deep history of how chief executives since the early nineteenth century have waged war . . . Most of the wars described here were grounded in deception and, arguably, were unjust wars of choice. Beschloss drives this point home in his disquieting study.” —Matthew Dallek, The Washington Post

“Beschloss’s broad scope lets you draw important cross-cutting lessons about presidential leadership. . . . Presidents of War is worth reading, whether you are one of the nation’s leaders or just an armchair historian.”—Bill Gates

“Conflict and war played an essential role in the accumulation of presidential power, as Michael Beschloss explains in his magisterial book. . . . Presidents of War, 10 years in the making, is on an epic scale.  It looks at leadership from every angle: communication, the critical relationship with Congress, the treatment of civil liberties and the role of the (often formidable) presidential spouse.”—Lionel Barber, Financial Times

“In this monumental book, the incomparable Michael Beschloss tells the riveting story of how, through history, our Presidents came to be so powerful and to lead Americans into waging major wars. With his new research discoveries and unerring eye for human detail, Beschloss has brought us an unforgettable narrative. Presidents of War is a landmark book about power, leadership and human nature itself.”—Jon Meacham, Pulitzer Prize-winning author of The Soul of America

“Once again, Beschloss captures our Presidents in terms both historic and human, showing that whoever holds the office will fearlessly—or fearfully—impact our world.”—Tom Hanks, author of Uncommon Type

“Michael Beschloss guides us on a fascinating and sobering journey from the War of 1812 to the present, illuminating a steady expansion in presidential war powers and consequent abandonment of the constitutional restraints the Founders crafted to prevent despotism.  It is a powerful and troubling story, essential reading for our time.” —Drew Gilpin Faust, author of This Republic of Suffering, President Emerita and Lincoln Professor of History, Harvard University

"There is no more serious task a President can undertake than leading our nation in war time. With Presidents of War, Michael Beschloss, our leading historian of the American presidency, presents a deeply researched and elegantly written chronicle of how presidents from the early nineteenth century through modern time have handled this most daunting and important responsibility. Revealing both the high points and the low, and using newly available material, Beschloss tells us much we did not know about important events and gives a different perspective on things we thought we knew." —Annette Gordon-Reed, Pulitzer Prize-winning author of The Hemingses of Monticello and Charles Warren Professor of American Legal History, Harvard Law School

"With his historian’s eye for the telling detail and a novelist’s appreciation for the quirks and crotchets of individual personalities, Michael Beschloss has crafted a sweeping chronicle of presidential war-making from the birth of the republic to the twenty-first century. Throughout this compelling story runs a question of ever-more clamorous urgency: have the Constitutional safeguards against war as the dread spawn of presidential ambition, whim, or ignorance been eroded to the point of irrelevance in our own day?"—David M. Kennedy, Pulitzer Prize-winning author of Freedom from Fear and Professor of History Emeritus, Stanford University

"Beschloss offers a sweeping history of American presidents seeking and waging war. . . . He provides insight into the motivations of American leaders; presidents’ battles with other branches of government; their degree of respect for civil liberties; and the role of personality, emotion, and the general political climate as American commanders-in-chief executed the power of the country’s military forces. . . . Ample detail and enticing storytelling.”—Publishers Weekly

“This spirited account, reminiscent of The Oxford History of the United States, will captivate history buffs and interest scholars of the institutional presidency and the Constitution.”—Library Journal (starred review)

“Exceptional storytelling. . . . Beschloss sweeps across more than 160 years, delving into presidential decision-making in eight wars from the early 19th century to Vietnam. Along the way, he paints rich portraits of Abraham Lincoln, Franklin Roosevelt, and other larger-than-life leaders whose choices determined the fates of millions and redirected the flow of history.”—Mark Atwood Lawrence, The Boston Globe

"Filled with fascinating insights. . . . A compelling work on the necessary qualities and dangers for wartime presidents."—Albert R. Hunt, Bloomberg

“Beschloss sounds the alarm about the president’s power to drag the nation into war. . . . Well-crafted. . . . Excellent.”—NPR

“A fascinating look at US presidential history and how leaders from James Madison to present times have dealt with the pressures and difficult decisions of war.”—The New York Post

"A monumental cautionary tale. . . . Vividly written, Presidents of War is a sobering and timely look at our commander-in-chief’s awesome war-making powers, and how those powers can so easily circumvent our Constitution.” —Chris Patsielis, Philadelphia Inquirer