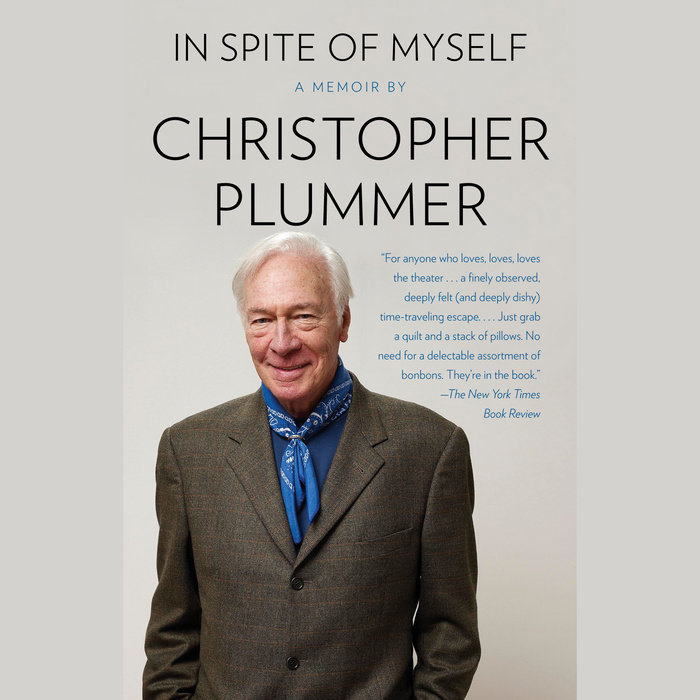 Plummer tells how “this young bilingual wastrel, incurably romantic, spoiled rotten, tore himself away from the ski slopes to break into the big bad world of theatre, not from the streets up but from an Edwardian living room down,” and writes of his early acting days as an eighteen-year-old playing the lead in Shakespeare’s Cymbeline.

We see his glorious New York of the fifties, where life began at midnight, with the likes of Arthur Miller, Carson McCullers, Tennessee Williams, and Paddy Chayefsky, and how Plummer’s own Broadway world developed and swept him along through the last Golden Age the American Theatre would ever remember . . . how the sublime Ruth Chatterton (“she might have been created by F. Scott Fitzgerald and Sinclair Lewis”) introduced him to the right people in New York . . . how Miss Eva Le Gallienne gave Plummer his Broadway debut at twenty-five in The Starcross Story (“It opened and closed in one night! One solitary night! But what a night!”).

He writes about his film career: The Sound of Music (affectionately dubbed “S&M”) . . . Inside Daisy Clover, which brought him together with the beautiful Natalie Wood . . . John Huston’s The Man Who Would Be King (Plummer was Rudyard Kipling). He tells the story of accepting Sir Laurence Olivier’s invitation to join the National Theatre Company, playing in Amphytron directed by Olivier himself (“a great actor but lousy director”), and writes about falling deeply in love with and eventually marrying a young actress and dancer, Elaine Taylor—to this day, his “one true strength.”

Seamlessly written, with stories that make us laugh out loud and that make real the fascinating, complex, exuberant adventure that is the actor’s (at least this actor’s) life.
Read More
“For anyone who loves, loves, loves the theater, not to mention the vanished New York of the 1950s and ‘60s. . . a finely observed, deeply felt (and deeply dishy) time-traveling escape worthy of a long stormy weekend. Just grab a quilt and a stack of pillows. No need for a delectable assortment of bonbons. They’re in the book. . . In spite of himself–his relentlessly high artistic principles; his penchant for playing the underdog, even when he was the star; his keen ear equally attuned to the precision of Elizabethan verse and to what passes as truth across a whiskey at 5 a.m. . . . this man has experienced a life rich in textures, and he is able to give most of them glorious voice. His is a life in the theater lived hard and true, in the grand tradition of those distinguished players who went before, whom he surely made proud. Good sir! I raise my glass to you.”

“A staggering parade of theater-world luminaries struts, swaggers and, yes, occasionally staggers through this compulsively readable memoir. . . Mr. Plummer seems to have worked with just about everyone imaginable–Ruth Chatterton and Katherine Cornell, Jason Robards and Laurence Olivier, Julie Harris and Judith Anderson, Tyrone Guthrie and Edward Everett Horton (!) – and he has a tasty anecdote about onstage, backstage or drinking-hole doings about every single one of them.”

“ [A] splendid, lively memoir, and for that matter a fair description of his life and personality… An immensely satisfying memoir, of rare grace, good humor, and unapologetic self-honesty…. as rich as a Christmas pudding… Plummer’s book is chockablock with a lifetime’s worth of good stories, interesting people and memorable performances, the distillation of a great career, and, I would guess, a great life. In tact and generosity of spirit, it is the very model of what a memoir should be….Nobody tells a better theatrical story, or more of them, than Plummer (well, almost nobody, John Gielgud was in a class by himself, and Plummer has three great Gielgud stories)…Plummer is above all a great storyteller…always deliciously indiscrete, and often very funny…I read every page of his book with interest, pleasure, an occasional tear, and many rich guffaws: it is, frankly, a treat, not only for its theatrical stories, but also because Plummer is that rarest of actors, intelligent, thoughtful, hard-working, talented, imaginative, generous, dedicated to his craft, and occasionally struck by spark of thespian genius. . . Anyone who still loves the theater will love every page of it.”

“[A] fascinating memoir…The book records so many trysts, pratfalls, drunken evenings–and afternoons–that it’s amazing he has survived… amply shows how Mr. Plummer has managed a long, successful career in spite of himself...”

“An enjoyable read, packed with anecdotes and amusing stories…this belongs on any library’s film or theater shelves.”

“A veteran actor of stage and screen rehearses his long personal and professional life, often with humor, rarely with rancor…revealing and charming.”

“An enchanting observer of the showbiz cavalcade, drawing vivid thumbnails of everyone from Laurence Olivier to Lenny Bruce and tossing off witty anecdotes like the most effortless ad libs. The result - a sparkling star turn from a born raconteur for whom all the world is indeed a stage.”