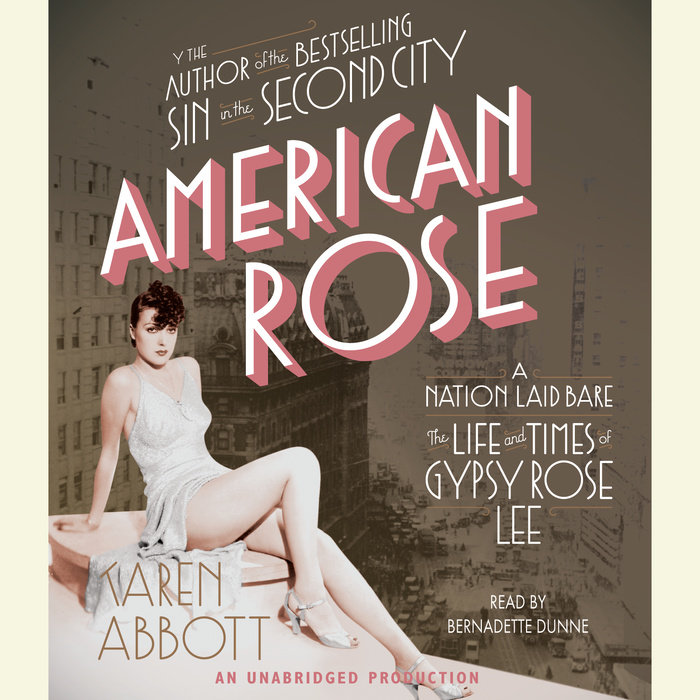 With the critically acclaimed Sin in the Second City, bestselling author Karen Abbott “pioneered sizzle history” (USA Today). Now she returns with the gripping and expansive story of America’s coming-of-age—told through the extraordinary life of Gypsy Rose Lee and the world she survived and conquered.

America in the Roaring Twenties. Vaudeville was king. Talking pictures were only a distant flicker. Speakeasies beckoned beyond dimly lit doorways; money flowed fast and free. But then, almost overnight, the Great Depression leveled everything. When the dust settled, Americans were primed for a star who could distract them from grim reality and excite them in new, unexpected ways. Enter Gypsy Rose Lee, a strutting, bawdy, erudite stripper who possessed a preternatural gift for delivering exactly what America needed.

With her superb narrative skills and eye for compelling detail, Karen Abbott brings to vivid life an era of ambition, glamour, struggle, and survival. Using exclusive interviews and never-before-published material, she vividly delves into Gypsy’s world, including her intensely dramatic triangle relationship with her sister, actress June Havoc, and their formidable mother, Rose, a petite but ferocious woman who seduced men and women alike and literally killed to get her daughters on the stage.

American Rose chronicles their story, as well as the story of the four scrappy and savvy showbiz brothers from New York City who would pave the way for Gypsy Rose Lee’s brand of burlesque. Modeling their shows after the glitzy, daring reviews staged in the theaters of Paris, the Minsky brothers relied on grit, determination, and a few tricks that fell just outside the law—and they would shape, and ultimately transform, the landscape of American entertainment.

With a supporting cast of such Jazz- and Depression-era heavyweights as Lucky Luciano, Harry Houdini, FDR, and Fanny Brice, Karen Abbott weaves a rich narrative of a woman who defied all odds to become a legend—and whose sensational tale of tragedy and triumph embodies the American Dream.
Read More
Praise for American Rose:

"Abbott creates a brainy striptease similar to the one her subject may have performed: uncovering doozies in one chapter about Lee's outrageous life, followed in the next by the less salacious (but always captivating) details about how New York City's Minsky brothers, who played a crucial role in Lee's stardom, built their burlesque empire." —Newsday

"At its core, American Rose is a haunting portrait of a woman 'giving what she has to, keeping all she can,' offering her audiences a sassy, confident self while making sure they would never know the damaged soul who created her." —The Los Angeles Times

"American Rose is the rare biography that captures the imagination and doesn't let go. It would scare the bejeesus out of Gypsy Rose Lee, and it's guaranteed to enthrall readers." —Book Page


Praise for Karen Abbott’s Sin in the Second City

“A delicious history . . . a lush love letter to the underworld . . . [Abbott] describes the Levee’s characters in such detail that it’s easy to mistake this meticulously researched history for literary fiction.”—The New York Times Book Review

“[Abbott’s] research enables the kind of vivid description à la fellow journalist Erik Larson’s The Devil in the White City that makes what could be a dry historic account an intriguing read.”—The Seattle Times

“[A] satisfyingly lurid tale . . . Change the hemlines, add 100 years, and the book could be filed under current affairs.”—USA Today

“A colorful history of old Chicago that reads like a novel.”—The Atlanta Journal-Constitution