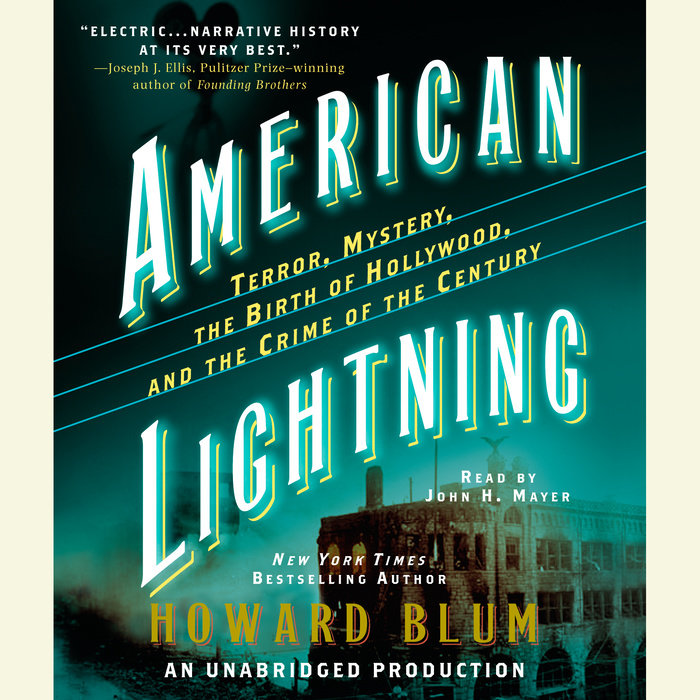 Written by: Howard Blum
Read by: John H. Mayer
10 Hours and 34 Minutes Imprint: Random House Audio Genre: History - United States - 20th Century Release Date: September 16, 2008
It was an explosion that reverberated across the country—and into the very heart of early-twentieth-century America. On the morning of October 1, 1910, the walls of the Los Angeles Times Building buckled as a thunderous detonation sent men, machinery, and mortar rocketing into the night air. When at last the wreckage had been sifted and the hospital triage units consulted, twenty-one people were declared dead and dozens more injured. But as it turned out, this was just a prelude to the devastation that was to come.

In American Lightning, acclaimed author Howard Blum masterfully evokes the incredible circumstances that led to the original “crime of the century”—and an aftermath more dramatic than even the crime itself.

With smoke still wafting up from the charred ruins, the city’s mayor reacts with undisguised excitement when he learns of the arrival, only that morning, of America’s greatest detective, William J. Burns, a former Secret Service man who has been likened to Sherlock Holmes. Surely Burns, already world famous for cracking unsolvable crimes and for his elaborate disguises, can run the perpetrators to ground.

Through the work of many months, snowbound stakeouts, and brilliant forensic sleuthing, the great investigator finally identifies the men he believes are responsible for so much destruction. Stunningly, Burns accuses the men—labor activists with an apparent grudge against the Los Angeles Times’s fiercely anti-union owner—of not just one heinous deed but of being part of a terror wave involving hundreds of bombings.

While preparation is laid for America’s highest profile trial ever—and the forces of labor and capital wage hand-to-hand combat in the streets—two other notable figures are swept into the drama: industry-shaping ﬁlmmaker D.W. Griffith, who perceives in these events the possibility of great art and who will go on to alchemize his observations into the landmark film The Birth of a Nation; and crusading lawyer Clarence Darrow, committed to lend his eloquence to the defendants, though he will be driven to thoughts of suicide before events have fully played out.

Simultaneously offering the absorbing reading experience of a can’t-put-it-down thriller and the perception-altering resonance of a story whose reverberations continue even today, American Lightning is a masterpiece of narrative nonfiction.
Read More
“Extraordinary…[reads] like a horseless-carriage episode of ’24.’”
—Wall Street Journal

“An absorbing, novel-like narrative…masterfully crafted…Blum’s dedication to digging for facts and adhering to journalistic principles in reporting this entangled and multifaceted tale l00 years after the fact raises comparisons to Truman Capote’s diligence in writing IN COLD BLOOD…AMERICAN LIGHTNING is a must-read.”
—USA Today

“A thumping-good drum roll of narrative history…the cross-country manhunt reads like a great mystery novel…Blum blows the dust off a page of America’s own incendiary past and brings it to pulsating life.”
—Dallas Morning News

“In an approach reminiscent of Truman Capote’s IN COLD BLOOD, Blum paints is characters in all their grandeur and tragedy, making them — and their era — come alive. Blum’s prose is tight, his speculations unfailingly sound and his research extensive — all adding up to an absorbing and masterful true crime narrative.”
—Publishers Weekly (Starred Review)

“The author’s eye for scene-setting and subtle explication perfectly mimics a Griffith-style camera. Blum is at his best when exploring the motivations, the genius and the deep flaws of his three principals, men who occupied the same room only once in their lives, but who are memorably linked in this book. Unfailingly entertaining.”
—Kirkus Reviews (Starred Review)

“Completely riveting…Blum chronicles the trial and its aftermath, building suspense with an astonishing cast of characters.”
—Booklist (Starred Review)

“An unforgettable tale of murder, deceit, celebrity, media manipulation, and film as propaganda, when the bombing of the Los Angeles Times building exposed the deadly ‘national dynamite plot’ by trade unionists to terrorize America with one-hundred bombings in a doomed attempt to force capitalism to its knees. The relentless pursuit, capture, trial, and punishment of the bombers made a national hero of America's Sherlock Holmes, master detective Billy Burns, and entangled crusading defense lawyer Clarence Darrow in a reckless, nearly career-ending scheme to bribe witnesses and jurors and throttle justice. Gripping, surprising, often thrilling, AMERICAN LIGHTNING ranks among the most riveting works of narrative history.”
—James L. Swanson, author of the Edgar Award-winning New York Times bestseller MANHUNT: THE 12-DAY CHASE FOR LINCOLN’S KILLER

“This is a wonderful story, with a cast of characters out of a Cecil B. DeMille epic, told in a style that is lucid, lyrical, even electric. Narrative history at its very best.”
—Joseph J. Ellis, Pulitzer Prize winning author of FOUNDING BROTHERS and AMERICAN CREATION

“In AMERICAN LIGHTNING Howard Blum brings to life the tragic bombing of the Los Angeles Times in l910. Writing with narrative verve and finely-honed detective instincts, Blum fleshes out the real story behind this hideous act of domestic terrorism. Highly recommended!”
—Douglas Brinkley, New York Times bestselling author of THE GREAT DELUGE and TOUR OF DUTY and Professor of History, Rice University

"Howard Blum has given us a fascinating--and hugely entertaining--glimpse into early 20th-century America. The burgeoning labor movement, the dawn of the movies, bomb-toting anarchists, ‘the crime of the century,’ gimlet-eyed private detectives, Clarence Darrow,  you name it and it's here. And--eat your hearts out, novelists--it's all true."
—John Steele Gordon, author of EMPIRE OF WEALTH: THE EPIC HISTORY OF AMERICAN ECONOMIC POWER

“As good a true-crime tale as you could hope to find, well-researched, vivid, irresistible.”
—Andrew Solomon, author of the National Book Award-winning THE NOONDAY DEMON

“Howard Blum has performed a literary miracle. He has brought back to vivid and relevant life a forgotten act of terrorism in America’s past — and made it as suspenseful and crowded with unforgettable characters as any novel I have ever read.”
—Thomas Fleming, New York Times bestselling author of THE OFFICERS’ WIVES, TIME AND TIDE and THE PERILS OF PEACE

“AMERICAN LIGHTNING strikes at the soul of Los Angeles the way RAGTIME revealed turn-of-the-century New York. Like E. L. Doctorow, Howard Blum has captured a time and a place through masterful manipulation of true events, weaving an intricate tale of class war and intrigue that harks back to an era when L.A. was little more than a pueblo, frontier justice still prevailed and a fabulous cast of real-life characters dragged the future metropolis kicking and screaming into the 20th Century.”
—Dennis McDougal, New York Times bestselling author of THE LAST MOGUL: LEW WASSERMAN, MCA, AND THE HIDDEN HISTORY OF HOLLYWOOD and PRIVILEGED SON: OTIS CHANDLER AND THE RISE AND FALL OF THE LA TIMES DYNASTY
Read More 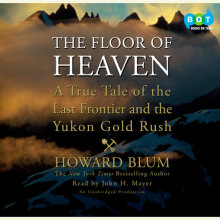