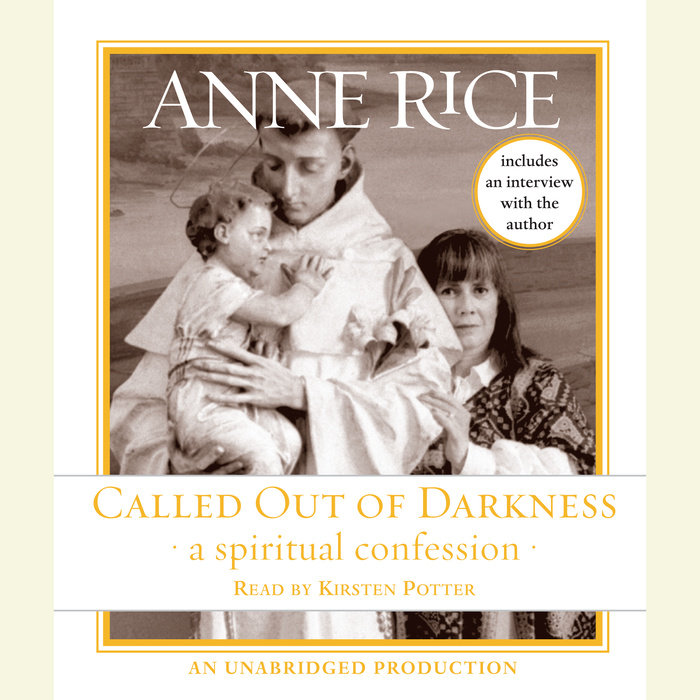 In 2005, Anne Rice startled her readers with her novel Christ the Lord: Out of Egypt, and by revealing that, after years as an atheist, she had returned to her Catholic faith.

And now, in her powerful memoir, Rice tells the story of the spiritual transformation that produced a complete change in her literary goals. She begins with her girlhood in New Orleans as the devout child in a deeply religious family. She writes about her years in Berkeley, where her career as a novelist began with the publication of Interview with the Vampire. She writes about loss and tragedy (her mother’s drinking; the death of her daughter and, later, her beloved husband); about new joys; about the birth of her son. She tells how after an adult lifetime of questioning, she experienced the intense conversion and consecration to Christ that lie behind her most recent novels.
Read More
“[A] very affecting story of a well-known prodigal’s return. . . . Called Out of Darkness is the vivid, engaging tale of the journey of a soul into light.” —Chicago Sun-Times

“Rice couples her writing talents with the zeal of a recent convert.” —Christianity Today

“Rice could rival C.S. Lewis as a popular apologist for the faith.” —Time

“Rice’s memoir shows what true belief really involves. It exacts a price. James Agee had a lovely term for this. He called it ‘cruel radiance.’” —Los Angeles Times

“Anne Rice is not a convert but a revert. . . . A loving reconstruction of the pre–Vatican II Church of the 1940s and 1950s. . . . [After] twenty-five years and twenty-one books . . . Rice entrusts both herself and the people she loves to God.” —First Things

“Called Out of Darkness is rich in both poetic simplicity and liberating confessionals. This memoir is not to be missed.” —East Bay Literary Examiner

“I am not a Christian and I normally don’t read what I would call Christian books. They don’t appeal to me, they don’t interest me and I normally pass them by in the bookstore. . . . [But] I picked up [Called Out of Darkness] up this afternoon and it’s beyond wonderful.” —Jamieson Wolf

“As a long-time reader of Anne Rice’s, the impetus she presents here makes me want to re-read many of her prior works. I highly recommend this book to anyone who seeks the inspiration and motivation behind the bestselling novels they’ve read.”—BookReporter.com

“Nothing short of magnificent. . . . What a real blessing, what a vulnerable sharing.” —Flos Carmeli

“Even if you don’t consider yourself to be a religious person—even if you are not a Christian—read this book. Anyone can appreciate the message contained in Called Out of Darkness. . . . It is a thinking person’s approach to faith.” —Edge (Provincetown, MA)
Read More