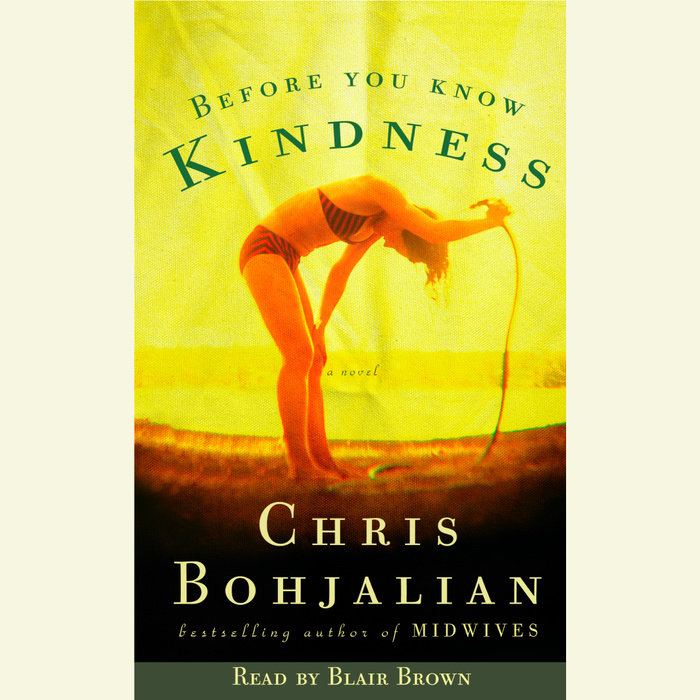 Written by: Chris Bohjalian
Read by: Susan Denaker
5 Hours and 31 Minutes Imprint: Random House Audio Genre: Fiction - Literary Release Date: October 05, 2004
For ten summers, the Seton family—all three generations—met at their country home in New England to spend a week together playing tennis, badminton, and golf, and savoring gin and tonics on the wraparound porch to celebrate the end of the season. In the eleventh summer, everything changed. A hunting rifle with a single cartridge left in the chamber wound up in exactly the wrong hands at exactly the wrong time, and led to a nightmarish accident that put to the test the values that unite the family—and the convictions that just may pull it apart.

Before You Know Kindness is a family saga that is timely in its examination of some of the most important issues of our era, and timeless in its exploration of the strange and unexpected places where we find love.

As he did with his earlier masterpiece, Midwives, Chris Bohjalian has written a novel that is rich with unforgettable characters—and absolutely riveting in its page-turning intensity.

“Chris Bohjalian’s many fans will be glad to know he’s back on the high wire, expertly balancing topical issues with the more timeless concerns of the human heart. His well-drawn, sympathetic characters deepen and intensify the novel’s gripping plot rather than simply serving it. Before You Know Kindness is smart, first-rate storytelling.”—Richard Russo, winner of the Pulitzer Prize for Empire Falls

“Once again, Chris Bohjalian dares to tackle the complexities—and complacencies—of modern society at its most vulnerable spot, where the personal clashes with the political, where the private is forced to go public. And once again, he forges a drama that will keep his readers on the edge of their seats...perhaps their conscience as well.”—Julia Glass, winner of the National Book Award for Three Junes

“Chris Bohjalian’s magnificent new novel, Before You Know Kindness, is the best work of fiction I’ve read about an American family since Amy Tan’s The Joy Luck Club. It is one of the funniest, best-written, most compassionate, most engaging, and flat-out most enjoyable novels I’ve ever read.”—Howard Frank Mosher, winner of the New England Book Award for A Stranger in the Kingdom

Also available as a Random House AudioBook, a Large Print edition, and an eBook.
Read More

"Extraordinary. . . . Bohjalian has had much success in the past, including a selection as an Oprah Book Club author. Before You Know Kindness is better than anything he's written before." –Milwaukee Journal Sentinel