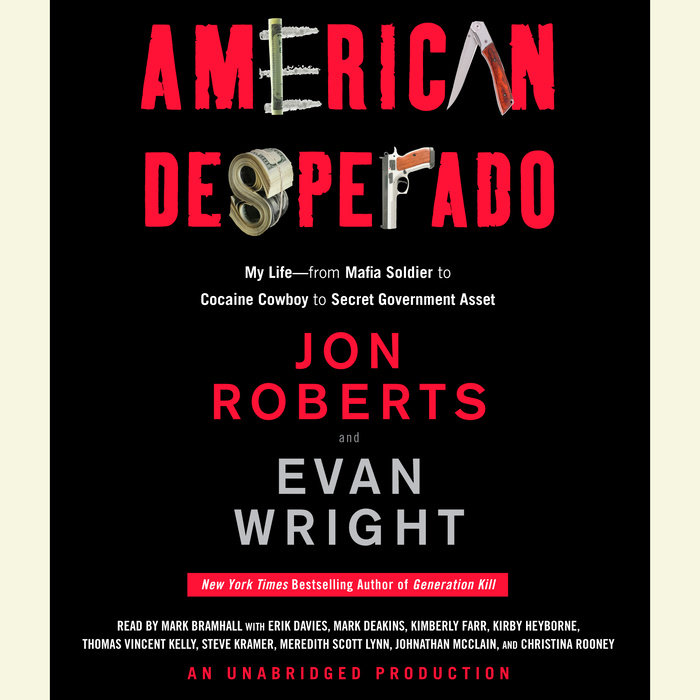 American Desperado is Roberts’ no-holds-barred account of being born into Mafia royalty, witnessing his first murder at the age of seven, becoming a hunter-assassin in Vietnam, returning to New York to become--at age 22--one of the city’s leading nightclub impresarios, then journeying to Miami where in a few short years he would rise to become the Medellin Cartel’s most effective smuggler.

But that’s just half the tale.

The roster of Roberts’ friends and acquaintances reads like a Who’s Who of the latter half of the 20th century and includes everyone from Jimi Hendrix, Richard Pryor, and O.J. Simpson to Carlo Gambino, Meyer Lansky, and Manuel Noriega.

Nothing if not colorful, Roberts surrounded himself with beautiful women, drove his souped-up street car at a top speed of 180 miles per hour, shared his bed with a 200-pound cougar, and employed a 6”6” professional wrestler called “The Thing” as his bodyguard.  Ultimately, Roberts became so powerful that he attracted the attention of the Republican Party’s leadership, was wooed by them, and even was co-opted by the CIA for which he carried out its secret agenda.

Scrupulously documented and relentlessly propulsive, this collaboration between a bloodhound journalist and one of the most audacious criminals ever is like no other crime book you’ve ever read.
Read More

“A spellbinding narrative of drugs, death and debauchery as told by one of America's most notorious criminals….A savage, unrelenting tale.”
─Kirkus Reviews

“The Moby Dick of mob memoirs…here is everything you've wanted to know—and much better, here is the way everything felt.  Evan Wright puts you so deep inside a career in organized crime that midway through you'll begin expecting a knock on your door and a call from your lawyer.”
─David Lipsky, author of the national bestseller ABSOLUTELY AMERICAN

“Delivers all the guilty pleasures one expects from a gangster's memoir, but Wright's superb prose offers something more: a meditation on good and evil during the glittering decay of late 20th century civilization…One of the best books of the year.”
─James L. Swanson, Edgar Award winning author of the New York Times bestsellers MANHUNT and BLOODY CRIMES

“AMERICAN DESPERADO is not only stranger but so much better than fiction…Captivating, addictive, and head-spinning, this one-of-a-kind book earns its place on the top shelf of true crime accounts.”
─Chuck Hogan, New York Times bestselling author of PRINCE OF THIEVES (basis of the Academy Award-nominated “The Town”)

“American Desperado is the first great crime book of the 21st Century. Dangerous, darkly hilarious, hair-raising, and terrifically written, Wright's prose spills over with the kind of insane, brilliantly rendered detail and dialogue that make you want to call people at four in the morning and read out loud.”
─Jerry Stahl, New York Times bestselling author of PERMANENT MIDNIGHT

“AMERICAN DESPERADO is one of the most disturbing memoirs I’ve ever read…Evan Wright does a brilliant job getting into Roberts’ scary head … I never want to be in the same room with Jon Roberts, but I couldn't stop reading his book.”
─Steven Gaines, New York Times bestselling author of PHILISTINES AT THE HEDGEROW and FOOL’S PARADISE

“Seldom have I read an account of criminal enterprise that took me so deeply into the blackness of a man’s soul—a scary read, pounding and relentless and irresistible.”
─Bruce Porter, author of BLOW

“Imagine if Mister Kurtz from HEART OF DARKNESS sat down with Dick Cavett for a little chat about the nature of good and evil, empathy, fatherhood, violence, drugs, power, self-knowledge, women, family, the hero versus the anti-hero, freedom, imprisonment...Try as you might, you can't really put this book down.”
─Doug Stanton, New York Times bestselling author of HORSE SOLDIERS and IN HARM’S WAY

“A tour de force. The best crime book since WISEGUY.  Puts you in the middle of a world where it's wonderful to be a tourist, terrible to be a resident. I am filled with nothing but admiration and envy for Evan Wright.”
─Rich Cohen, New York Times bestselling co-author of WHEN I STOP TALKING YOU’LL KNOW I’M DEAD, and author of TOUGH JEWS