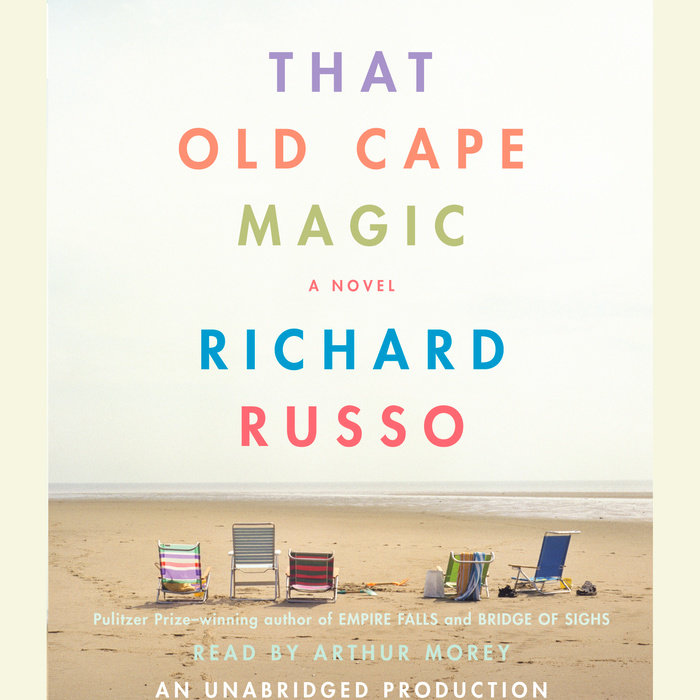 Following Bridge of Sighs—a national best seller hailed by The Boston Globe as “an astounding achievement” and “a masterpiece”—Richard Russo gives us the story of a marriage, and of all the other ties that bind, from parents and in-laws to children and the promises of youth.

Griffin has been tooling around for nearly a year with his father’s ashes in the trunk, but his mother is very much alive and not shy about calling on his cell phone. She does so as he drives down to Cape Cod, where he and his wife, Joy, will celebrate the marriage of their daughter Laura’s best friend. For Griffin this is akin to driving into the past, since he took his childhood summer vacations here, his parents’ respite from the hated Midwest. And the Cape is where he and Joy honeymooned, in the course of which they drafted the Great Truro Accord, a plan for their lives together that’s now thirty years old and has largely come true. He’d left screenwriting and Los Angeles behind for the sort of New England college his snobby academic parents had always aspired to in vain; they’d moved into an old house full of character; and they’d started a family. Check, check and check.

But be careful what you pray for, especially if you manage to achieve it. By the end of this perfectly lovely weekend, the past has so thoroughly swamped the present that the future suddenly hangs in the balance. And when, a year later, a far more important wedding takes place, their beloved Laura’s, on the coast of Maine, Griffin’s chauffeuring two urns of ashes as he contends once more with Joy and her large, unruly family, and both he and she have brought dates along. How in the world could this have happened?

That Old Cape Magic is a novel of deep introspection and every family feeling imaginable, with a middle-aged man confronting his parents and their failed marriage, his own troubled one, his daughter’s new life and, finally, what it was he thought he wanted and what in fact he has. The storytelling is flawless throughout, moments of great comedy and even hilarity alternating with others of rueful understanding and heart-stopping sadness, and its ending is at once surprising, uplifting and unlike anything this Pulitzer Prize winner has ever written.
Read More
“Suffused with Russo’s signature comic sensibility, and with insights, by turns tender and tough, about human frailty, forbearance, fortitude, and fervor.” –Glenn C. Altschuler, The Boston Globe

“Family, family, family is the subject of That Old Cape Magic [with] a complicated skein of plotlines, deep connection to place, and affection for the large cast of characters who blunder and struggle through his pages.” –Roxanna Robinson, The New York Times Book Review

“Utterly charming. If you always cry at weddings, you’ll cry at this–and laugh, too…Russo has written a novel for people who are terrified of becoming their parents, which is to say for everybody [and it] seems especially intimate, a dyspeptic romantic comedy from a Pulitzer Prize winner who catches the bittersweet humor of our common neuroses…It’s a marvelous portrayal of the strands of affection and irritation that run through a family, entangling in-laws and children’s crushes and even old friends.” –Ron Charles, The Washington Post

“A comic yet thoughtful take on marriage…But amid the humor, it raises questions about the complications we inherit and the ones we build for ourselves.” –Bob Minzesheimer, USA Today

“When we finish reading That Old Cape Magic, we know we’ll start rereading it soon. And that the characters will come to mind at the most unpredictable times. We will stay on speaking terms with them more than we do with some of our real-life cousins.” –Betsy Willeford, The Miami Herald

“A recipe for laying ghosts to rest [and] a tale about love requited and unrequited. Finally, it is a big-hearted book about real, complex relationships that are an utterly fascinating mix of the two.” –Rosemary Herbert, Bangor Daily News

“His most intimate yet: an astute portrait of a 30-year marriage, in all its promise and pain…His honest, heartfelt storytelling–like a cooling breeze off a certain New England shoreline–has never felt fresher.” –Andrew Abrahams, People

“Wryly funny…An impressively expansive analysis of familial dynamics between not only spouses but also in-laws, parents and children…It’s Russo all the same, and his many fans are sure to savor the journey.” –Joanne Wilkinson, Booklist

“In one of America’s most mythic landscapes, Russo details one man’s shaky first steps out of his past and into self-knowledge with good humor, generosity, and an open heart.” –Pam Houston, O, The Oprah Magazine
Read More