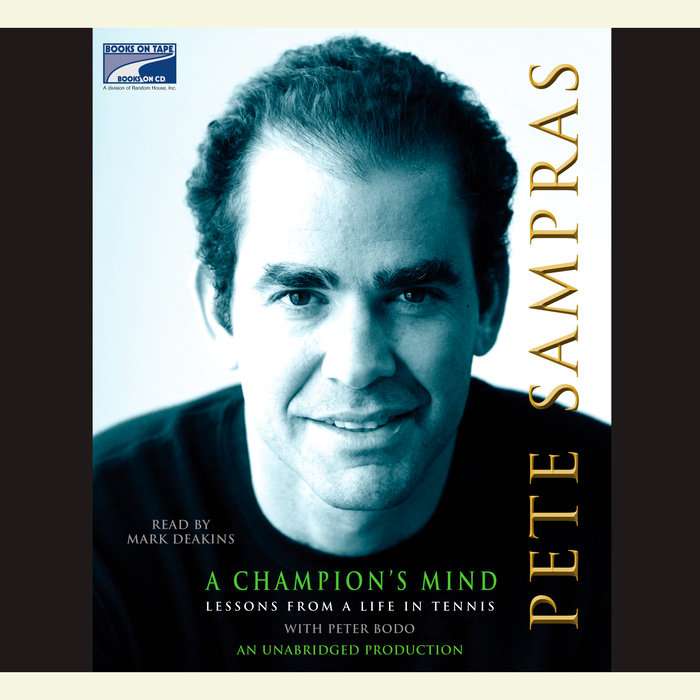 In A Champion’s Mind, the tennis great who so often exhibited visible discomfort with letting people “inside his head” finally opens up. An athletic prodigy, Pete resolved from his earliest playing days never to let anything get in the way of his love for the game. But while this single-minded determination led to tennis domination, success didn’t come without a price. The constant pressure of competing on the world’s biggest stage—in the unblinking eye of a media machine hungry for more than mere athletic greatness—took its toll.

Here for the first time Pete speaks freely about what it was like to possess what he calls “the Gift.” He writes about the personal trials he faced—including the death of a longtime coach and confidant—and the struggles he gutted his way through while being seemingly on top of the world. Among the book’s most riveting scenes are an early devastating loss to Stefan Edberg that led Pete to make a monastic commitment to delivering on his natural talent; a grueling, four-hour-plus match against Alex Corretja during which Pete became seriously ill; fierce on-court battles with rival and friend Andre Agassi; and the triumphant last match of Pete’s career at the finals of the 2002 U.S. Open.

In A Champion’s Mind, one of the most revered, successful, and intensely private players in the history of tennis offers an intimate look at the life of an elite athlete.
Read More
“Consider this book Sampras’ 15th Grand Slam. A thoroughly compelling read that–apart from retracing a gilded sport career–really probes the ‘hard drive’ of a champion. It’s as if all the emotion and insight that Sampras sometimes seemed reluctant to express during his playing days comes spilling forth.”
—Jon Wertheim, Senior Writer, Sports Illustrated and SI.com

"As the title says, this is a remarkable look into a champion's mind, and maybe one of the best tennis memoirs ever. Pete captures the pressure a player feels once he's reached the top. He puts us next to him on the court, and we get a clear sense of what made him extraordinary: he was supremely determined, dedicated to learning the strengths and weaknesses of his opponents, and committed to never ever yielding a point easily. Pete wrote this book the way he plays tennis: full-out."
—Rod Laver

“Even playing at a high level, it’s hard to know what the experience of winning–and trying to stay on top–is like for another competitor. We all react so differently to pressure, to the glow of the spotlight. It is brutally hard to stay grounded, and yet this wonderfully candid book shows that it was Pete’s rare ability to compartmentalize and draw strength from his family that allowed him to reach the sport’s pinnacle. Whether championships are in your past or just live in your dreams, you’ll learn a lot from Pete’s story.”
—Monica Seles

"Pete Sampras was always able to rise to the occasion, winning so many big matches at the biggest events.  This book provides the reader a glimpse into Pete's remarkable career and how he was able attain his vision of being the best player in the world.  We can all benefit from the insight he offers."
—Roger Federer
Read More