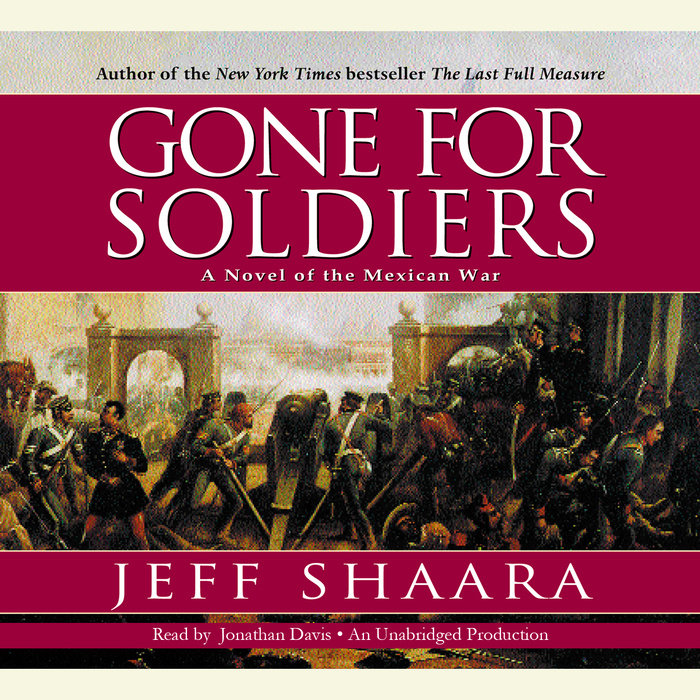 Written by: Jeff Shaara
Read by: Jonathan Davis
6 Hours and 13 Minutes Imprint: Random House Audio Genre: Fiction - Historical - General Release Date: July 05, 2000
With his acclaimed New York Times bestsellers Gods and Generals and The Last Full Measure, Jeff Shaara expanded upon his father's Pulitzer Prize-winning Civil War classic, The Killer Angels--ushering the reader through the poignant drama of this most bloody chapter in our history. Now, in Gone for Soldiers, Jeff Shaara carries us back fifteen years before that momentous conflict, when the Civil War's most familiar names are fighting for another cause, junior officers marching under the same flag in an unfamiliar land, experiencing combat for the first time in the Mexican-American War.

In March 1847, the U.S. Navy delivers eight thousand soldiers on the beaches of Vera Cruz. They are led by the army's commanding general, Winfield Scott, a heroic veteran of the War of 1812, short tempered, vain, and nostalgic for the glories of his youth. At his right hand is Robert E. Lee, a forty-year-old engineer, a dignified, serious man who has never seen combat.

Scott leads his troops against the imperious Mexican dictator, General Antonio Lopez de Santa Ana. Obsessed with glory and his place in history, Santa Ana arrogantly underestimates the will and the heart of Scott and his army. As the Americans fight their way inland, both sides understand that the inevitable final conflict will come at the gates and fortified walls of the ancient capital, Mexico City.

Cut off from communication and their only supply line, the Americans learn about their enemy and themselves, as young men witness for the first time the horror of war. While Scott must weigh his own place in history, fighting what many consider a bully's war, Lee the engineer becomes Lee the hero, the one man in Scott's command whose extraordinary destiny as a soldier is clear.

In vivid, brilliant prose that illuminates the dark psychology of soldiers and their commanders trapped behind enemy lines, Jeff Shaara brings to life the haunted personalities and magnificent backdrop, the familiar characters, the stunning triumphs and soul-crushing defeats of this fascinating, long-forgotten war. Gone for Soldiers is an extraordinary achievement that will remain with you long after the final page is turned.
Read More