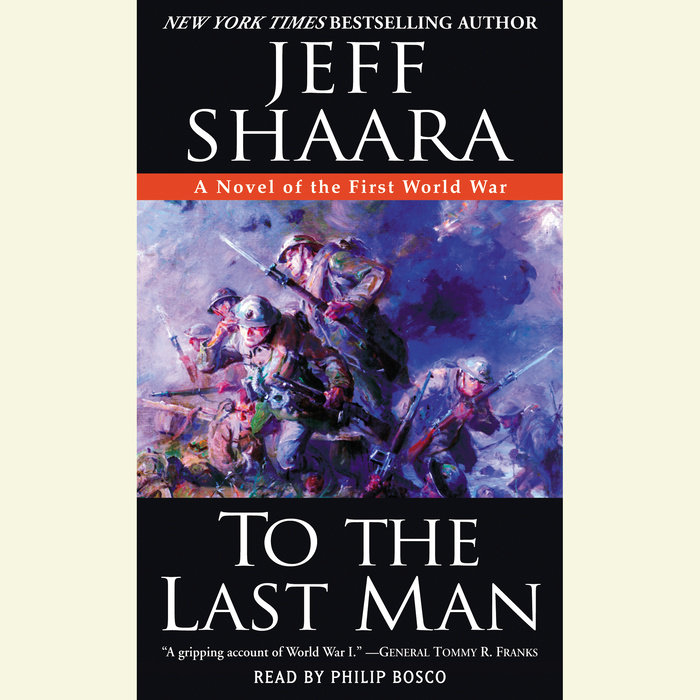 Jeff Shaara has enthralled readers with his New York Times bestselling novels set during the Civil War and the American Revolution. Now the acclaimed author turns to World War I, bringing to life the sweeping, emotional story of the war that devastated a generation and established America as a world power.

Spring 1916: the horror of a stalemate on Europe’s western front. France and Great Britain are on one side of the barbed wire, a fierce German army is on the other. Shaara opens the window onto the otherworldly tableau of trench warfare as seen through the eyes of a typical British soldier who experiences the bizarre and the horrible–a “Tommy” whose innocent youth is cast into the hell of a terrifying war.

In the skies, meanwhile, technology has provided a devastating new tool, the aeroplane, and with it a different kind of hero emerges–the flying ace. Soaring high above the chaos on the ground, these solitary knights duel in the splendor and terror of the skies, their courage and steel tested with every flight.

As the conflict stretches into its third year, a neutral America is goaded into war, its reluctant president, Woodrow Wilson, finally accepting the repeated challenges to his stance of nonalignment. Yet the Americans are woefully unprepared and ill equipped to enter a war that has become worldwide in scope. The responsibility is placed on the shoulders of General John “Blackjack” Pershing, and by mid-1917 the first wave of the American Expeditionary Force arrives in Europe. Encouraged by the bold spirit and strength of the untested Americans, the world waits to see if the tide of war can finally be turned.

From Blackjack Pershing to the Marine in the trenches, from the Red Baron to the American pilots of the Lafayette Escadrille, To the Last Man is written with the moving vividness and accuracy that characterizes all of Shaara’s work. This spellbinding new novel carries readers–the way only Shaara can–to the heart of one of the greatest conflicts in human history, and puts them face-to-face with the characters who made a lasting impact on the world.
Read More
Praise for To the Last Man

“A gripping account of World War I–from tactics to strategy. The reader feels the horror of the trenches in France and is drawn into the maneuvering of political and military leaders on both sides of the battle. Jeff Shaara shows the dominance of the U.S. military in the context of coalition warfare–as relevant today as it was in 1918.”
–GENERAL TOMMY R. FRANKS

“A sweeping, searching look at World War I. Jeff Shaara’s novel rings with authenticity, from the feelings of frontline soldiers to the challenges of high-level command.”
–GENERAL WESLEY CLARK

“Jeff Shaara has again demonstrated that rarest of writing gifts, making literature read like history and history read like literature. He has now shone that talent on another era as he brings World War I to pulsating life.”
–JOSEPH E. PERSICO, author of Eleventh Month, Eleventh Day, Eleventh Hour

“The best novel about the Great War since Remarque’s All Quiet on the Western Front, which it greatly surpasses in depth, scope, and intensity. . . . This account of how the war was really fought will be a real eye opener for anyone interested in historical fiction or modern history.”
–JOHN MOSIER, author of The Myth of the Great War

“A riveting masterpiece revolving around the ghastly conflict that still profoundly defines the world we live in. With To the Last Man, Shaara cements his reputation as a war writer of Tolstoyan or Homeric dimensions.”
–STEVE FORBES

“Jeff Shaara’s To the Last Man lets you live WWI in the air, in the mud, and in the councils of government in a way that makes you understand how the participants experienced it. Von Richtofen, Lufbery, Ludendorff, and Pershing come alive.”
–MAJOR GENERAL JOHN S. GRINALDS, U.S. Marine Corps (Ret.),
President, The Citadel
Read More