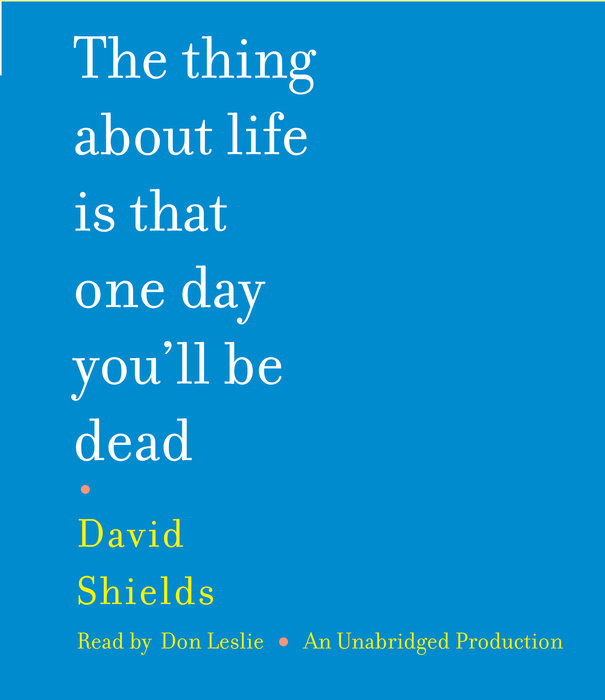 Mesmerized–at times unnerved–by his ninety-seven-year-old father’s nearly superhuman vitality and optimism, David Shields undertakes an investigation of the human physical condition. The result is this exhilarating audiobook: both a personal meditation on mortality and an exploration of flesh-and-blood existence from crib to oblivion–an exploration that paradoxically prompts a renewed and profound appreciation of life.

Shields begins with the facts of birth and childhood, expertly weaving in anecdotal information about himself and his father. As the book proceeds through adolescence, middle age, old age, he juxtaposes biological details with bits of philosophical speculation, cultural history and criticism, and quotations from a wide range of writers and thinkers–from Lucretius to Woody Allen–yielding a magical whole: the universal story of our bodily being, a tender and often hilarious portrait of one family.

“A double-memoir-commonplace book in which [Shields] presents his and his father’s life stories, lovingly encrusted with facts about aging and death (it turns out your soul doesn’t weigh 21 grams after all) . . . The result is an edifying, wise, unclassifiable mixture of filial love and Oedipal rage.” —Lev Grossman, Time Magazine

“Shields is a sharp-eyed, self-deprecating, at times hilarious writer. Approaching the flatline of the last page, we want more.” –Stephen Bates, The Wall Street Journal


“Enthralling . . . Fascinating . . . Ultimately, the humanity of Shields’ interior and exterior exploration is what makes The Thing About Life–and life itself–worthwhile.” —Meredith Maran, The San Francisco Chronicle

“Shields undergoes his midlife crisis and comes out the other side– more accessible than ever before, more tender, ‘nicer.’ And yet The Thing About Life adroitly sidesteps sentimentality–very hard to do when the core of it is a son’s love for his cranky, tenacious, irascible, geriatric, Jewish father. I love this book.”–David Guterson

“[An] informative and occasionally unsettling meditation on [Shields’s] own aging body and his [97-year-old] nonagenarian father’s seemingly endless vigor and strength . . . He writes with great candor about the vitality of his father. . . Also woven into the text are clever quotes on matters corporeal from the likes of Wordsworth, Wittgenstein, Woody Allen, and Martha Graham. Shields’s memoir is a sobering, at times poignant, reminder that none of us gets out of this life alive.”–Booklist

“David Shields has accomplished something here so pure and wide in its implications that I think of it almost as a secular, unsentimental Kahlil Gibran: a textbook for the acceptance of our fate on earth.” —Jonathan Lethem

“It’ s a bold writer who dares to tackle head-on the subject of what it means to be human– something that David Shields does with an extraordinary mixture of tenderness, humor, and inexhaustible curiosity.” —Jonathan Raban

“The Thing About Life grabbed me from the start. It’s extremely compelling, gorgeous in many places.  I loved it. And I wish I had written it.”–Lauren Slater
Read More