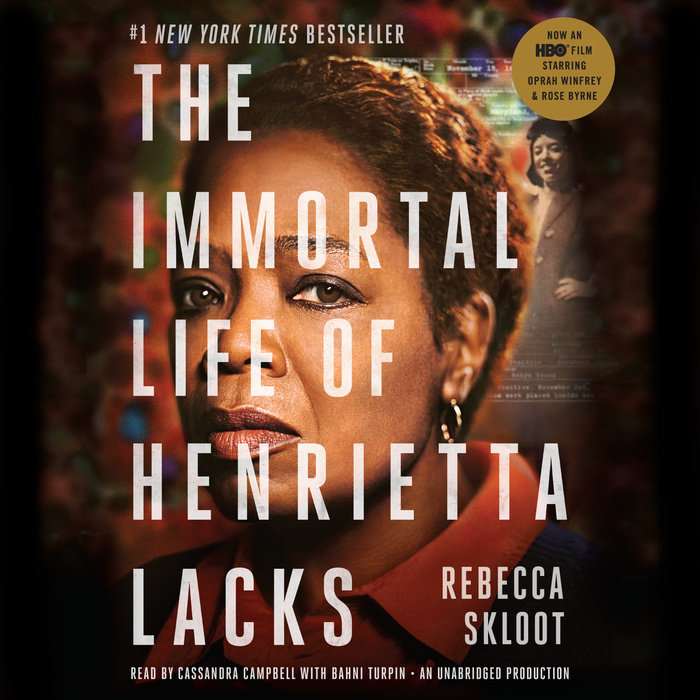 NOW A MAJOR MOTION PICTURE FROM HBO® STARRING OPRAH WINFREY AND ROSE BYRNE • ONE OF THE “MOST INFLUENTIAL” (CNN), “DEFINING” (LITHUB), AND “BEST” (THE PHILADELPHIA INQUIRER) BOOKS OF THE DECADE • ONE OF ESSENCE’S 50 MOST IMPACTFUL BLACK BOOKS OF THE PAST 50 YEARS • WINNER OF THE CHICAGO TRIBUNE HEARTLAND PRIZE FOR NONFICTION

Her name was Henrietta Lacks, but scientists know her as HeLa. She was a poor Southern tobacco farmer who worked the same land as her slave ancestors, yet her cells—taken without her knowledge—became one of the most important tools in medicine: The first “immortal” human cells grown in culture, which are still alive today, though she has been dead for more than sixty years. HeLa cells were vital for developing the polio vaccine; uncovered secrets of cancer, viruses, and the atom bomb’s effects; helped lead to important advances like in vitro fertilization, cloning, and gene mapping; and have been bought and sold by the billions.

Henrietta’s family did not learn of her “immortality” until more than twenty years after her death, when scientists investigating HeLa began using her husband and children in research without informed consent. And though the cells had launched a multimillion-dollar industry that sells human biological materials, her family never saw any of the profits. As Rebecca Skloot so brilliantly shows, the story of the Lacks family—past and present—is inextricably connected to the dark history of experimentation on African Americans, the birth of bioethics, and the legal battles over whether we control the stuff we are made of.

Over the decade it took to uncover this story, Rebecca became enmeshed in the lives of the Lacks family—especially Henrietta’s daughter Deborah. Deborah was consumed with questions: Had scientists cloned her mother? Had they killed her to harvest her cells? And if her mother was so important to medicine, why couldn’t her children afford health insurance?

Intimate in feeling, astonishing in scope, and impossible to put down, The Immortal Life of Henrietta Lacks captures the beauty and drama of scientific discovery, as well as its human consequences.
Read More
"One of the most graceful and moving nonfiction books I’ve read in a very long time . . . The Immortal Life of Henrietta Lacks . . . floods over you like a narrative dam break, as if someone had managed to distill and purify the more addictive qualities of Erin Brockovich, Midnight in the Garden of Good and Evil and The Andromeda Strain. . . . It feels like the book Ms. Skloot was born to write. It signals the arrival of a raw but quite real talent.”—Dwight Garner, The New York Times

"Skloot's vivid account begins with the life of Henrietta Lacks, who comes fully alive on the page. . . . Immortal Life reads like a novel.”—Eric Roston, The Washington Post

“Gripping . . . by turns heartbreaking, funny and unsettling . . . raises troubling questions about the way Mrs. Lacks and her family were treated by researchers and about whether patients should control or have financial claims on tissue removed from their bodies.”—Denise Grady, The New York Times

“The Immortal Life of Henrietta Lacks is a fascinating read and a ringing success. It is a well-written, carefully-researched, complex saga of medical research, bioethics, and race in America. Above all it is a human story of redemption for a family, torn by loss, and for a writer with a vision that would not let go.”—Douglas Whynott, The Boston Globe

"Riveting . . . raises important questions about medical ethics . . . It's an amazing story. . . . Deeply chilling . . . Whether those uncountable HeLa cells are a miracle or a violation, Skloot tells their fascinating story at last with skill, insight and compassion.”—Colette Bancroft, St. Petersburg Times

“The history of HeLa is a rare and powerful combination of race, class, gender, medicine, bioethics, and intellectual property; far more rare is the writer than can so clearly fuse those disparate threads into a personal story so rich and compelling. Rebecca Skloot has crafted a unique piece of science journalism that is impossible to put down—or to forget.”—Seed magazine

“No one can say exactly where Henrietta Lacks is buried: during the many years Rebecca Skloot spent working on this book, even Lacks’s hometown of Clover, Virginia, disappeared. But that did not stop Skloot in her quest to exhume, and resurrect, the story of her heroine and her family. What this important, invigorating book lays bare is how easily science can do wrong, especially to the poor. The issues evoked here are giant: who owns our bodies, the use and misuse of medical authority, the unhealed wounds of slavery ... and Skloot, with clarity and compassion, helps us take the long view. This is exactly the sort of story that books were made to tell—thorough, detailed, quietly passionate, and full of revelation.”—TED CONOVER, author of Newjack and The Routes of Man

“It’s extremely rare when a reporter’s passion finds its match in a story. Rarer still when the people in that story courageously join that reporter in the search for what we most need to know about ourselves. When this occurs with a moral journalist who is also a true writer, a human being with a heart capable of holding all of life’s damage and joy, the stars have aligned. This is an extraordinary gift of a book, beautiful and devastating—a work of outstanding literary reportage. Read it! It’s the best you will find in many many years.”—ADRIAN NICOLE LEBLANC, author of Random Family

”The Immortal Life of Henrietta Lacks brings to mind the work of Philip K. Dick and Edgar Allan Poe. But this tale is true. Rebecca Skloot explores the racism and greed, the idealism and faith in science that helped to save thousands of lives but nearly destroyed a family. This is an extraordinary book, haunting and beautifully told.”—ERIC SCHLOSSER, author of Fast Food Nation

“Skloot’s book is wonderful -- deeply felt, gracefully written, sharply reported. It is a story about science but, much more, about life.”—SUSAN ORLEAN, author of The Orchid Thief

“This is a science biography like the world has never seen. What if one of the great American women of modern science and medicine--whose contribution underlay historic discoveries in genetics, the treatment and prevention of disease, reproduction, and the unraveling of the human genome--was a self-effacing African-American tobacco farmer from the Deep South? A devoted mother of five who was escorted briskly to the Jim Crow section of Johns Hopkins for her cancer treatments? What if the untold millions of scientists, doctors, and patients enriched and healed by her gift never, to this day, knew her name? What if her contribution was made without her knowledge or permission? Ladies and gentlemen, meet Henrietta Lacks. Chances are, at the level of your DNA, your inoculations, your physical health and microscopic well-being, you’ve already been introduced.”—Melissa Fay Greene, author of Praying for Sheetrock and There Is No Me Without You

“Heartbreaking and powerful, unsettling yet compelling, The Immortal Life of Henrietta Lacks is a richly textured story of the hidden costs of scientific progress. Deftly weaving together history, journalism and biography, Rebecca Skloot?s sensitive account tells of the enduring, deeply personal sacrifice of this African American woman and her family and, at long last, restores a human face to the cell line that propelled 20th century biomedicine. A stunning illustration of how race, gender and disease intersect to produce a unique form of social vulnerability, this is a poignant, necessary and brilliant book.”—Alondra Nelson, Columbia University; editor of Technicolor: Race, Technology and Everyday Life

“Rebecca Skloot has written a marvelous book so original that it defies easy description. She traces the surreal journey that a tiny patch of cells belonging to Henrietta Lacks’s body took to the forefront of science. At the same time, she tells the story of Lacks and her family—wrestling the storms of the late twentieth century in America—with rich detail, wit, and humanity. The more we read, the more we realize that these are not two separate stories, but one tapestry. It’s part The Wire, part The Lives of the Cell, and all fascinating.”—Carl Zimmer, author of Microcosm

“If virtues could be cultured like cells, Rebecca Skloot’s would be a fine place to start¾a rare combination of compassion, courage, wisdom, and intelligence. This book is extraordinary. As a writer and a human being, Skloot stands way, way out there ahead of the pack.”—MARY ROACH, author of Stiff and Bonk

“The Immortal Life of Henrietta Lacks takes the reader on a remarkable journey—compassionate, troubling, funny, smart—and irresistible. Along the way, Rebecca Skloot will change the way you see medical science and lead you to wonder who we should value more—the researcher or the research subject? Ethically fascinating and completely engaging—I couldn’t recommend it more.”—DEBORAH BLUM, author of The Poisoner’s Handbook and The Monkey Wars and the Helen Firstbrook Franklin professor of journalism at the University of Wisconsin-Madison

“This remarkable story of how the cervical cells of the late Henrietta Lacks, a poor black woman, enabled subsequent discoveries from the polio vaccine to in vitro fertilization is extraordinary in itself; the added portrayal of Lacks's full life makes the story come alive with her humanity and the palpable relationship between race, science, and exploitation.—PAULA J. GIDDINGS, author of Ida, A Sword Among Lions; Elizabeth A. Woodson 1922 Professor, Afro-American Studies, Smith College

“Rebecca Skloot’s steadfast commitment to illuminating the life and contribution of Henrietta Lacks, one of the many vulnerable subjects used for scientific advancement, and the subsequent impact on her family is a testament to the power of solid investigative journalism. Her deeply compelling account of one family’s long and troubled relationship with America’s vast medical-industrial complex is sure to become a cherished classic.”—ALLEN M. HORNBLUM, author of Acres of Skin and Sentenced to Science

“Writing with a novelist’s artistry, a biologist’s expertise, and the zeal of an investigative reporter, Skloot tells a truly astonishing story of racism and poverty, science and conscience, spirituality and family driven by a galvanizing inquiry into the sanctity of the body and the very nature of the life force.”—Booklist (starred review) 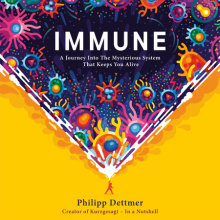 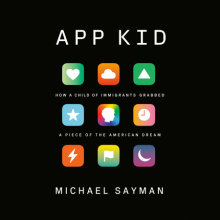