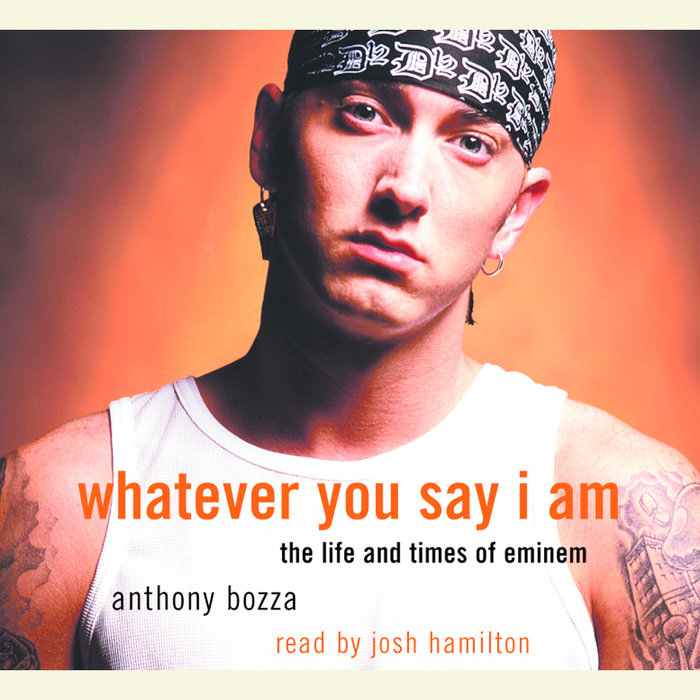 On assignment for his first cover story for Rolling Stone, the very first national cover story on Eminem, Anthony Bozza met a young blond kid, a rapper who would soon take the country by storm. But back in 1999, Eminem was just beginning to make waves among suburban white teenagers as his first single, “My Name Is,” went into heavy rotation on MTV.

Who could have predicted that in a mere two years, Eminem would become the most reviled and controversial hip-hop figure ever? Or that twelve months after that, Eminem would sit firmly at the pinnacle of American celebrity, a Grammy winner many times over and the recipient of an Oscar.

did eminem change or did america finally figure him out?

Whatever You Say I Am attempts to answer this question and many more. Since their first meeting, Bozza has been given a level of access to Eminem that no other journalist has enjoyed. In Whatever You Say I Am, original, never-before-published text from Bozza’s interviews with Eminem are combined with the insight of numerous hip-hop figures, music critics, journalists, and members of the Eminem camp to look behind the mask of this enigmatic celebrity. With an eye toward Eminem’s place in American popular culture, Bozza creates a thoughtful portrait of one of the most successful artists of our time. This is so much more than a biography of a thoroughly well-documented life. It is a close-up look at a conflicted figure who has somehow spoken to the heart of America.
Read More
“While most scribes, with eyes closed, have long been pushing pens in hot pursuit of international rap phenom Eminem, Anthony Bozza has wisely devoted his time to exploring the trials and tribulations of Detroit native Marshall Mathers III. And he who understands Mathers understands the fabric of American society—beautiful stitches, stains, rips, and all.”—Sacha Jenkins, former Vibe magazine music editor, writer at large for Spin magazine, and coauthor of Ego Trip’s Big Book of Racism! and Ego Trip’s Book of Rap Lists

“Anthony Bozza was granted an access to Eminem that no journalist is likely to see again soon—and so Whatever You Say I Am offers the most intimate glimpses yet of the most towering, complicated figure of our culture.”
—Alan Light, former editor in chief of Vibe and Spin magazines, and editor of The Vibe History of Hip-Hop.
Read More