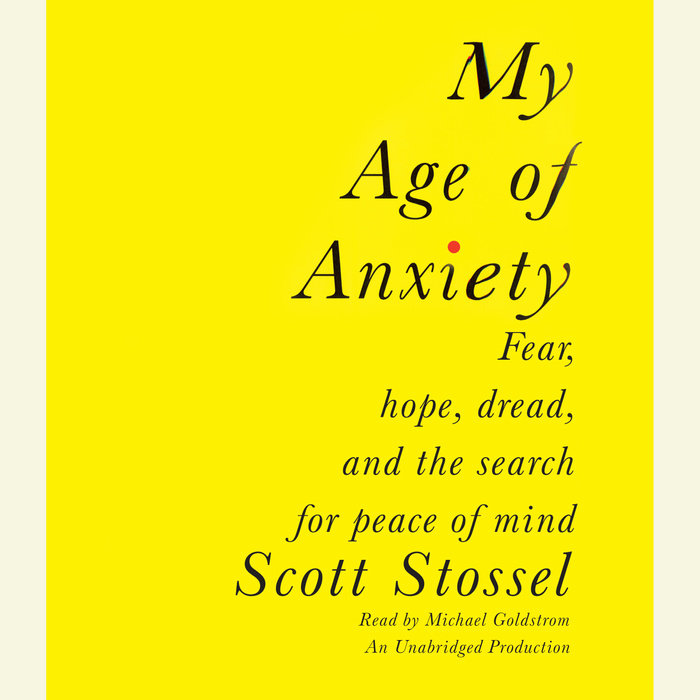 As recently as thirty-five years ago, anxiety did not exist as a diagnostic category. Today, it is the most common form of officially classified mental illness. Scott Stossel gracefully guides us across the terrain of an affliction that is pervasive yet too often misunderstood.

Drawing on his own long-standing battle with anxiety, Stossel presents an astonishing history, at once intimate and authoritative, of the efforts to understand the condition from medical, cultural, philosophical, and experiential perspectives. He ranges from the earliest medical reports of Galen and Hippocrates, through later observations by Robert Burton and Søren Kierkegaard, to the investigations by great nineteenth-century scientists, such as Charles Darwin, William James, and Sigmund Freud, as they began to explore its sources and causes, to the latest research by neuroscientists and geneticists. Stossel reports on famous individuals who struggled with anxiety, as well as on the afflicted generations of his own family. His portrait of anxiety reveals not only the emotion’s myriad manifestations and the anguish anxiety produces but also the countless psychotherapies, medications, and other (often outlandish) treatments that have been developed to counteract it. Stossel vividly depicts anxiety’s human toll—its crippling impact, its devastating power to paralyze—while at the same time exploring how those who suffer from it find ways to manage and control it.
My Age of Anxiety is learned and empathetic, humorous and inspirational, offering the reader great insight into the biological, cultural, and environmental factors that contribute to the affliction.
Read More
Kirkus (starred review)
“In this captivating and intimate book, the editor of the Atlantic spares no detail about his lifelong struggle with anxiety and contextualizes his personal experience within the history of anxiety’s perception and treatment….Stossel deftly explores a variety of treatments and their risks and successes, providing unique insight as both a journalist (whose priority is impartial investigation) and sufferer (whose imperative is to feel well). Throughout, the author’s beautiful prose and careful research combine to make this book informative, thoughtful and fun to read. Powerful, eye-opening and funny. Pitch perfect in his storytelling, Stossel reminds us that, in many important ways, to be anxious is to be human.”

Booklist (starred review)
“Tying together notions about anxiety culled from history, philosophy, religion, sports, and literature with current neuropsychiatric research and his extensive personal experience, Stossel’s book is more than an astounding autobiography, more than an atlas of anxiety. His deft handling of a delicate topic and frustrating illness highlights the existential dread, embarrassment, and desperation associated with severe anxiety yet allows room for resiliency, hope, transcendence. Absolutely fearless writing.”

Daniel Akst, The Wall Street Journal
“Excessive anxiety, it turns out, is like most things that beset humans: partly nature and partly nurture. And it may even have its virtues. Worriers tend to be conscientious, sensitive to others and detail-oriented. These can be useful traits in many aspects of life: in marriage, say, and in the workplace. They appear to be useful in an author as well, judging by Mr. Stossel's achievement in "My Age of Anxiety."...In dissecting his own acute case, along with the disorder that afflicts him, he offers a degree of understanding to the rest of us—along with a modicum of comfort and even hope to those who must trudge through life chronically anxious despite their seeming good fortune.”

Jen Chaney, The Washington Post
“By combining such unfiltered honesty with deep reporting, Stossel has delivered an enlightening, empowering read. But all of his disclosures serve a higher purpose, too. His candor about his sense of unrest—as well as his gnawing, conflicted feelings about admitting to it—serve as the foundation for his investigation into the panic and apprehension that afflict millions of Americans….The word ‘brave’ tends to get thrown around pretty cavalierly in our culture, but given the frankness of this book, there’s no other appropriate word for what Stossel does here. It’s brave, and, as Dr. W. suggests, potentially therapeutic for individuals other than the writer himself. I can personally attest to that.”

Steve Danziger, Open Letters Monthly
“The most accurate representation of the anxiety sufferer’s mindset that I’ve ever come across….I suspect that much will be made of Stossel’s bravery, but praise should be given to his literary achievement and the arrival of a substantial, if challenging, voice capable of elucidating the 130 year history of “magic” pharmaceuticals….The book is a startling achievement.”

Kimberly Marlowe Hartnett, The Seattle Times
“Scott Stossel’s new book on his lifelong struggle with severe anxiety is outstanding in the fullest sense of the word. ‘My Age of Anxiety: Fear, Hope, Dread, and the Search for Peace of Mind’ is both conspicuous and superior within its genre. Stossel, who also wrote a fine biography of Sargent Shriver, brings his dogged fact-digging skills to this work, which is peppered with humor and humility, remarkably balanced—and generous to the point of philanthropy with his deeply personal, hard-won knowledge. Plus, the man is a lovely writer.”

David Adam, Nature
“Books exploring personal experiences of mental illness tend to be either over-wrought accounts of personal trauma that shed little light on the world beyond the author’s nose, or the more detached observations of scientists and medics. It is rare to find works that bridge these objectives, which is one reason that the writer Andrew Solomon achieved such success with The Noonday Demon….Stossel’s book deserves a place on this higher shelf.”

Matt Price, Newsday
“‘My Age of Anxiety’” is a brave—and quite possibly perverse—book, one that will leave you squirming and fascinated in equal measure….There is much pain here, but humor, too….Without meaning to, Stossel has written a self-help manual. There is no miracle cure for anxiety, he suggests—we can manage our fears and worries, even if we can never quite tame them.”

Matthew Gilbert, The Boston Globe
“On the one hand, the book is astonishingly thorough and lucidly written. It’s a fascinating look at that linchpin of the human condition—the primitive fight-or-flight response—and how it resides in our psyches in a time of IEDs and SSRIs. Rare will be the reader who doesn’t spot him or herself somewhere in Stossel’s sweeping analysis, as he digs into parenting styles, performance stress, talk therapy, medication, depression, fear of flying, blushing, you name it. On the other hand, you have to wonder if “My Age of Anxiety” is so good, so copiously reported and completist, in large part thanks to Stossel’s harsh expectations of himself....His perpetual agony has become our reading pleasure.”

Publishers Weekly
“Stossel's journey through his own life is unsparing, darkly funny (a nervous stomach tends to flare up at the worst times, like in front of JFK Jr.), but above all, hopeful. As with many sufferers, Stossel's quest to find relief is unfinished, but his book relays a masterful understanding of the condition he and millions of others endure.”

Tablet
“Amazingly candid and compassionate…A comprehensive study of anxiety—how people saw it in the past, how scientists and psychologists understand it today, and what if anything can be done to cure it.”

Bookforum
“Enthralling...an extraordinary literary performance....It is also—I hope I don't sound like a publicist—extremely useful....In an age inundated by memoirs and psychic self-help books, My Age of Anxiety is the rare memoir that tells an entirely compelling story, and the rare self-help book that really helps. You, and many thousands of readers along with you, will laugh until you cry.”

Amy Bloom, O Magazine
“Scott Stossel’s erudite, heartfelt, and occasionally darkly funny meld of memoir, cultural history, and science, feels excruciatingly relevant….Stossel, the editor of The Atlantic, is a wry, if distressed, chronicler of his own history and that of psychopharmacology. It’s been a long and in many ways frightening journey for him. Still, near the end of the book, in a chapter titled ‘Redemption,’ Stossel attempts to see the upside of anxiety—the links between it and creativity, productivity, morality. His therapist advises him to give himself more credit for being resilient, and it seems he does. He concludes with hope that ‘admitting my shame and fear to the world’ will ultimately be ‘empowering and anxiety reducing.’ We hope so, too.”

Sherryl Connelly, New York Daily News
“The editor of the Atlantic magazine, Stossel has suffered from debilitating anxiety and phobias since childhood. With humor, insight and intense research, he sheds light on the disorder that is believed to affect one in seven Americans. From a historical overview to a review of current treatments in a book laced with fascinating personal anecdotes, Stossel delivers authentic perspective on such suffering."

Canadian Living
“I don’t like to tell people that they need to read a certain book, who am I to tell you what to do? But today I am breaking that rule because Scott Stossel’s My Age of Anxiety: Fear, hope, dread, and the search for peace of mind is a must-read for anyone who is dealing with anxiety.”

Andrew Solomon, author of The Noonday Demon
“Scott Stossel has produced the definitive account of anxiety, weaving together science, history, and autobiography. His writing is evocative and often witty, disarmingly intimate, and wonderfully empathetic. This story has needed to be told, and Stossel tells it with edgy frankness.”

Daniel Smith, author of Monkey Mind: A Memoir of Anxiety
“Scott Stossel is a wreck, but he’s a gorgeous wreck: honest, curious, compassionate, and obsessively, almost neurotically, well-informed. He’s gone deep into the history and science of anxiety and produced an invaluable work, full of compelling detail and truly hard-won wisdom. I learned a great deal from this wonderful book.”

Elizabeth Gilbert, author of Eat, Pray, Love: One Woman's Search for Everything Across Italy, India and Indonesia
“Most of us at some point have suffered from anxiety. Some of us have felt it severely; others have felt it often. But an unlucky few—like Scott Stossel—live with minds that are constant storm-tossed seas of dread and shame. It could not have been easy for Stossel to dissect his own anxiety so honestly in this memoir. But he was brave as hell to write it, and I'm glad he did, for he brings to this story depth, intelligence, and perspective that could enlighten untold fellow sufferers for years to come.”

Ben Mezrich, author of the New York Times Bestsellers The Accidental Billionaires and Bringing Down The House
“Fascinating and hugely entertaining, Scott Stossel's My Age of Anxiety is a brilliant look into one of the most prevalent conditions of our time. An intense, incredibly brave narrative tinged with moments of outright hilarity, it's impossible to put down; anyone who has ever suffered even the mildest bout of anxiety is going to be captivated by the author's quest to understand the sometimes twisted workings of his own mind. Without a doubt, Stossel is one of the most screwed up individuals I have ever encountered-and this book is one of the best I have read in years.”

Joshua Wolf Shenk, author of Lincoln's Melancholy
“What adjectives shall I use to describe Scott Stossel's My Age of Anxiety? 'Brave,' certainly. 'Erudite' and 'trenchant' also come quickly to mind. But for those of us who suffer from anxiety—and for families, friends and colleagues—maybe the single most important description is 'useful.' This book is staggeringly, brilliantly, indispensably useful.”