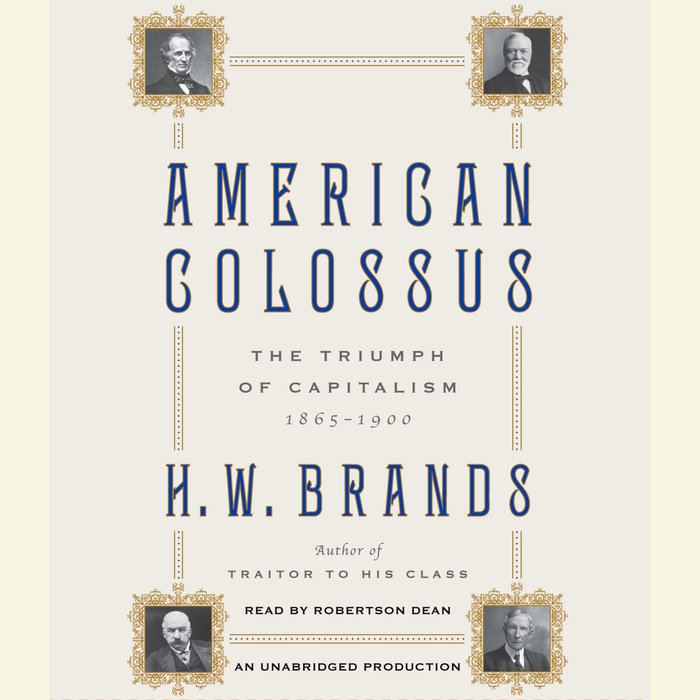 Written by: H. W. Brands
Read by: Robertson Dean
23 Hours and 30 Minutes Imprint: Random House Audio Genre: History - United States - 19th Century Release Date: October 12, 2010
In a grand-scale narrative history, the bestselling author of two finalists for the Pulitzer Prize now captures the decades when capitalism was at its most unbridled and a few breathtakingly wealthy businessmen utterly transformed America from an agrarian economy to a world power.

The years between the Civil War and the end of the nineteenth century saw the wholesale transformation of America from a land of small farmers and small businessmen into an industrial giant. Driven by unfathomably wealthy and powerful businessmen like J. P. Morgan, Andrew Carnegie and John D. Rockefeller, armies of workers, both male and female, were harnessed to a new vision of massive industry. A society rooted in the soil became one based in cities, and legions of immigrants were drawn to American shores. What’s more, in accomplishing its revolution, capitalism threatened to eclipse American democracy. “What do I care about the law?” bellowed Cornelius Vanderbilt. “Hain’t I got the power?” He did, and with it he and the other capitalists reshaped every aspect of American life. In American Colossus, H.W. Brands portrays the emergence, in a remarkably short time, of a recognizably modern America.

The capitalist revolution left not a single area or aspect of American life untouched. It roared across the South, wrenching that region from its feudal past and integrating the southern economy into the national one. It burst over the West, dictating the destruction of Native American economies and peoples, driving the exploitation of natural resources, and making the frontier of settlement a business frontier as well. It crashed across the urban landscape of the East and North, turning cities into engines of wealth and poverty, opulence and squalor. It swamped the politics of an earlier era, capturing one major party and half of the other, inspiring the creation of a third party and determining the issues over which all three waged some of the bitterest battles in American history.

Brands’s spellbinding narrative beautifully depicts the oil gushers of western Pennsylvania, the rise, in Chicago, of the first skyscraper, the exploration of the Colorado River, the cattle drives of the West, and the early passionate sparks of union life. By 1900 the America he portrays is wealthier than ever, yet prosperity is precarious, inequality rampant, and democracy stretched thin. American Colossus is an unforgettable portrait of the years when the contest between capitalism and democracy was at its sharpest, and capitalism triumphed.
Read More
Praise for American Colossus

"Mr. Brands, a terrific writer who commands his material, handles this sprawling, complicated story with authority and panache. A book that might have been a worthy but boring tome turns out to be as close as serious history gets to a page turner....American Colossus is a first-rate overview of one of the most important periods in American history, one without which the American Century could not have happened."
—John Steele Gordon, The New York Times


"A superb new history….This is a big, brash narrative running from the Confederate surrender at Appomattox to the trust busting of Theodore Roosevelt….I read swaths of this book twice, just to savor Brands’ storytelling and mastery of detail."
—James Pressley, Bloomberg News

"An excellent book….H. W. Brands is a smart, lively writer… [who] demonstrates, as the best historians do, that past is prologue."
—Dallas Morning News

Praise for The Age of Gold
“A fine, robust telling of one of the greatest adventure stories in history.”
—David McCullough, Pulitzer Prize–winning author of John Adams

“This is a rare book indeed, shedding new light and brilliant insight upon an elusive subject we thought we knew well . . . Traitor to His Class will quickly emerge as the finest one-volume biography of FDR.”
—David Oshinsky, winner of the 2006 Pulitzer Prize for History

“H. W. Brands has accomplished a remarkable feat in this terrific work…. He has brought to vivid life the central figures in his story . . . while at the same time providing a fresh understanding of the rich historical context for their thoughts and actions at every step along the way.”
—Doris Kearns Goodwin, Pulitzer Prize–winning historian and author of Team of Rivals

“This may well be the best general biography of Franklin Roosevelt we will see for many years to come.”
—Christian Science Monitor

“H. W. Brands has given us the authoritative Franklin biography for our time.”
—Joseph J. Ellis, author of the Pulitzer Prize–winning Founding Brothers

“A biography with a rich cast of secondary characters and a large and handsome stock of historical scenery…This is a Franklin to savor.”
—Wall Street Journal

“Sweeping and specific . . . [Brands] writes the story with clarity and vigor . . . .Clearly adds to our knowledge of an era when men rode to the sound of guns and honor was a comprehensible concept.”
—Washington Post Book World

“Brands [is] on the path to becoming the preeminent popular historian of his generation.”
—Chicago Tribune