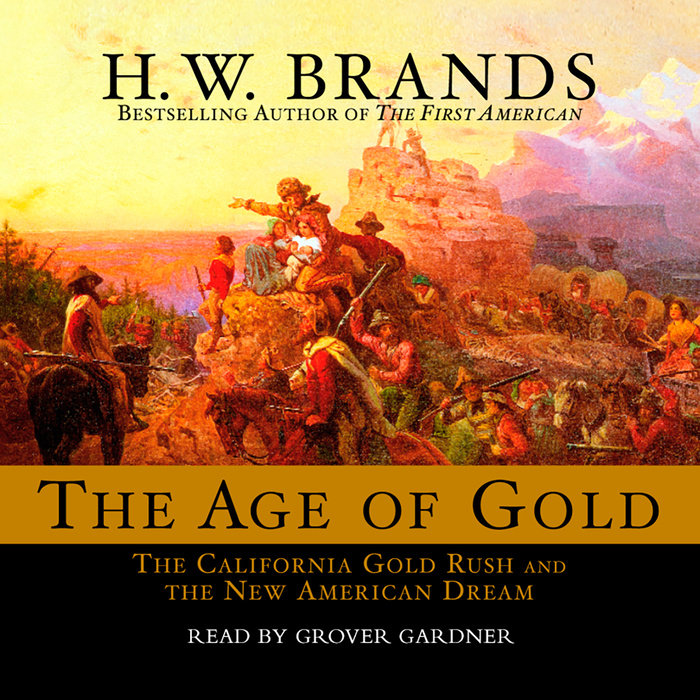 THEY WENT WEST TO CHANGE THEIR LIVES AND IN THE BARGAIN THEY CHANGED THE WORLD. THIS IS THE EXTRAORDINARY STORY OF THE MEN AND WOMEN OF THE GOLD RUSH.

When gold was first discovered on the American River above Sutter's Fort in January 1848, California was sparsely populated frontier territory not yet ceded to the United States from Mexixo. The discovery triggered a massive influx as hundreds of thousands of people scrambled to California in search of riches, braving dangerous journeys across the Pacific, around Cape Horn, and through the Isthmus of Panama, as well as across America's vast, unsettled wilderness. Cities sprang up overnight, in response to the demand for supplies and services of all kinds. By 1850, California had become a state -- the fastest journey to statehood in U.S. history. It had also become a symbol of what America stood for and of where it was going.

In The Age of Gold, H. W. Brands explores the far-reaching implications of this pivotal point in U.S. history, weaving the politics of the times with the gripping stories of individuals that displays both the best and the worse of the American character. He discusses the national issues that exploded around the ratification of California's statehood, hastening the clouds that would lead to the Civil War. He tells the stories of the great fortunes made by such memorable figures as John and Jessie Fremont, Leland Stanford and George Hearst -- and of great fortunes lost by hundreds now forgotten by history. And he reveals the profound effect of the Gold Rush on the way Americans viewed their destinies, as the Puritan ethic of hard work and the gradual accumulation of worldly riches gave way to the notion of getting rich quickly.
Read More
“A fine, robust telling of one of the greatest adventure stories in history.”
– David McCullough, Pulitzer-Prize winning author of John Adams

“A gripping narrative account of the mad rush for California riches that forever changed America… A real page-turner.”
– Douglas Brinkley, Director of the Eisenhower Center and professor of History at the University of New Orleans.

“Fascinating stories that transcend the mundane and take us to new levels of the human experience...Brands tells it, superbly.”
– Stephen E. Ambrose

“Brands gives us the literary equivalent of the Comstock Lode.”
– Richard Norton Smith, author of the Pulitzer-Prize finalist Thomas E. Dewey and His Times and Patriarch : George Washington and the New American Natio

“A magnificent, compelling story that takes us into one of the most thrilling and important moments in the American past.”
– Michael Beschloss, author of The Crisis Years: Kennedy and Khrushchev, 1960-1963

“An engrossing, multifaceted history... Its author, like the miners of the gold rush themselves, leaves no stone unturned.”
– Janet Maslin, The New York Times

“A barn burner...There’s only one thing to say...and that’s ‘Eureka!’”
– The San Francisco Chronicle

“Reminiscent of a hundred shoot-em-up flicks...Earns its keep from start to finish.”
– Book Magazine

“Brilliantly pans the historical record for nuggets of hardship and, in the process, hits upon a mother lode of a story.”
– The Austin American Statesman

“Brands weaves a grand tale about Americans, of all races, of diverse origins, who were heroic but not perfect.”
– Raleigh News and Observer
Read More