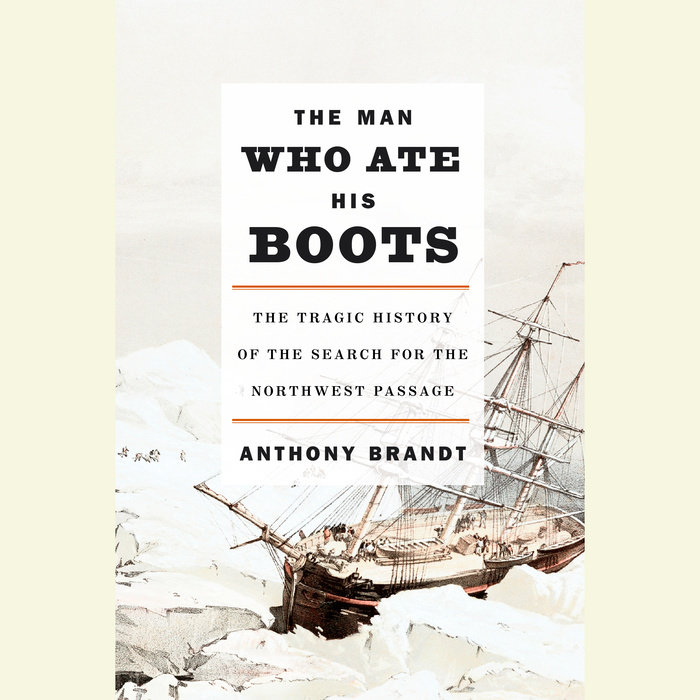 After the triumphant end of the Napoleonic Wars in 1815, the British took it upon themselves to complete something they had been trying to do since the sixteenth century: find the fabled Northwest Passage, a shortcut to the Orient via a sea route over northern Canada. For the next thirty-five years the British Admiralty sent out expedition after expedition to probe the ice-bound waters of the Canadian Arctic in search of a route, and then, after 1845, to find Sir John Franklin, the Royal Navy hero who led the last of these Admiralty expeditions and vanished into the maze of channels, sounds, and icy seas with two ships and 128 officers and men.

In The Man Who Ate His Boots, Anthony Brandt tells the whole story of the search for the Northwest Passage, from its beginnings early in the age of exploration through its development into a British national obsession to the final sordid, terrible descent into scurvy, starvation, and cannibalism. Sir John Franklin is the focus of the book but it covers all the major expeditions and a number of fascinating characters, including Franklin’s extraordinary wife, Lady Jane, in vivid detail. The Man Who Ate His Boots is a rich and engaging work of narrative history that captures the glory and the folly of this ultimately tragic enterprise.
Read More
“A robust new history . . . Brandt tells his story well . . . Achieves a modern synthesis between the hagiography of the old days and the more recent historical revisionism.”—Sara Wheeler, The New York Times Book Review

“Brandt displays a keen knowledge of the social, historical and political movements that propelled England to undertake such a costly, ultimately tragic goal . . . Thoughtful, compassionate and meticulously researched, “The Man Who Ate His Boots” offers readers a vivid, compelling, ultimately heartbreaking history of Arctic exploration.”
—Marc Covert, The Oregonian

“Brandt is a superb and profound writer who leads us through a tale of such hardship you feel as if you've been aboard ship with them. It’s no small feat to use a bit of history to illuminate the future, but Brandt pulls it off. This is narrative history at its absolute gripping best.”
—Sebastian Junger, author of The Perfect Storm and War

“A well-researched account . . . Brandt is at his best when he weaves in back stories of the politics and petty feuds that shaped much of the public perception.”
—Henry Stern, Willamette Week

“A splendid, gripping account of an astounding, unbelievable quest . . . What Brant brings to this mesmerizing tale is what only fine writing can deliver: fully realized sense impressions that make history come memorably alive, and an informed, sensitive analysis of historical events that puts them in larger context.”
—Joan Baum The Independent (Hamptons)

“History, fate, delusion and hope play out in the story of John Franklin, in particular during his last expedition to find the passage and map the Arctic in 1845. It’s one of those books that can keep a reader inside for an entire weekend.”
—Susan Salter Reynolds, LA Times

“Often witty in his approach, Brandt makes the absurdity of Arctic exploration and the quest for the Northwest Passage entertaining for the general reader. Highly recommended.”
—Library Journal (Starred review)

“Brandt pens a colorful narrative full of gothic horrors, quiet daring, and petty personality clashes, and probes the social meaning of these odysseys . . . The result is a gripping—and sometimes appalling—tale of heroism and hubris.”
—Publishers Weekly

“Heroism tinged with scandal, high adventure beset by unbearable suffering . . . A sterling examination of a national obsession that tracks the finds as well as the futilities of more than 60 years of harrowing Arctic exploration.”
—Kirkus

"A rich and satisfying read, and a classic history of Arctic exploration.”
—Laurence Bergreen, author of Marco Polo: From Venice to Xanadu

“Anthony Brandt's account of the fatal quest for the Northwest Passage is fascinating, horrifying and inspiring.  It is not just a great tale of heroic exploration, wonderfully told, but an epic voyage of discovery into the recesses of the human spirit.”
—Piers Brendon, author of The Decline and Fall of the British Empire
Read More