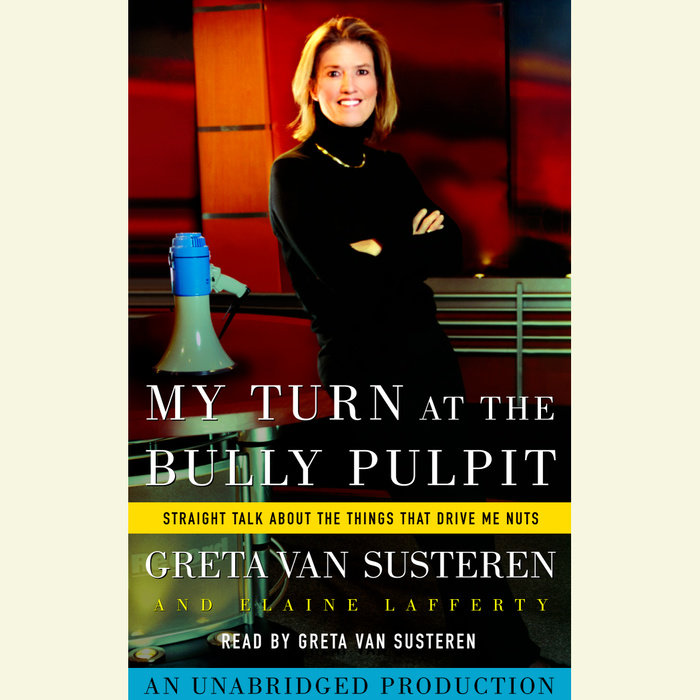 Written by: Greta Van Susteren & Elaine Lafferty
Read by: Greta Van Susteren
4 Hours and 53 Minutes Imprint: Random House Audio Genre: Political Science - Commentary & Opinion Release Date: August 26, 2003
Welcome to the bully pulpit where opinions fly but common sense rules. Here’s where you’ll find straight talk about the most pressing issues of the day, all delivered in the trademark commonsense style of one of America’s most popular and admired television news anchors. Always resisting the political label that attempts to place people in one ideological camp or another, Greta Van Susteren speaks from the mind and the heart, not as a liberal or a conservative, but as a right-thinking, sensible citizen. “Our country is at a critical juncture,” she writes, and “too many of us are caught up in old definitions of left and right that no longer apply. If I favor the death penalty in some cases, does that make me right-wing? If I think hate crimes legislation is stupid, does that make me a conservative? If I happen to like and enjoy Ozzy Osbourne and have him on my show, does that make me a liberal? And if I believe that corporations should be held accountable if their products harm citizens and they should be subject to the rulings of a jury—ditto for doctors who commit medical malpractice—does that make me a lefty trial lawyer?”

Here’s more of Greta in her own words:

On the military: Liberty isn’t free. As a nation, we must provide for the men and women who put their lives on the line for us. That means good pay, adequate funding for defense, and our heartfelt support. Vietnam was a very long time ago. We Baby Boomers have to wake up and realize that today’s military is a different military from the one we grew up with, and we are fighting a very different war. Patriotism is not a conservative or a liberal thing. Patriotism, as far as I am concerned, is the duty and obligation of every American.

On the Supreme Court: There should be a litmus test for Supreme Court and federal court judges, and that test should be their opinion about allowing public access to court proceedings. Let cameras inside the courthouse, or at least allow an audio feed to radio. What are they hiding?

On the death penalty: It should be legal and available to courts and juries . . . but it should be used extremely rarely, and only when we are absolutely certain that a fair trial has taken place.

On how you look: It’s your business and nobody else’s. Your looks and your life are not a democracy—not everybody gets a vote. Make your appearance and your choices a totalitarian regime—you are the boss.

On fun: It isn’t a curse word. It’s actually quite serious business, as it makes the hard times livable and the sad times bearable. Fun should be part of a work environment, too. Stuffed shirts and snobs who can’t stop and laugh at themselves should be banished!

In Greta’s company you’re guaranteed to get a fresh dose of common sense and a good hearty rant on many of the most important issues we face today. One more guarantee: you’ll have some good fun while you’re at it.
Read More