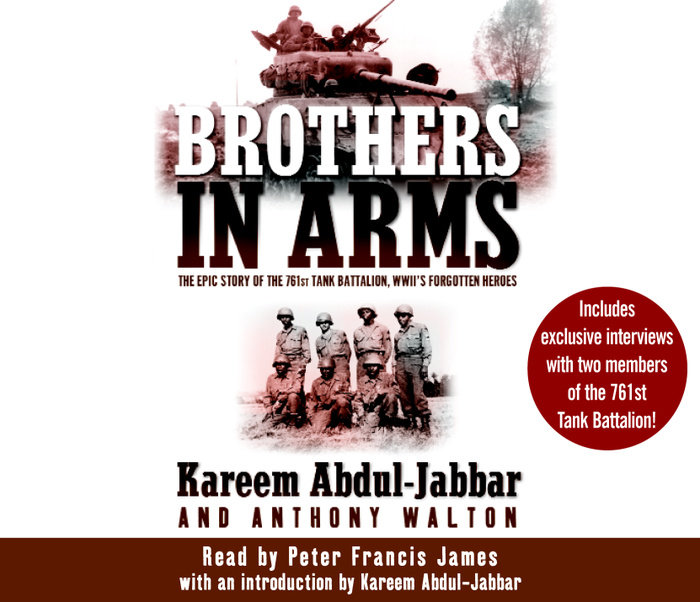 “More than a combat story . . . it’s also the story of how black soldiers had to fight (literally and figuratively) for the right to fight the Germans.”—USA Today

Kareem Abdul-Jabbar first became immersed in the history of the 761st Battalion through family friend Leonard “Smitty” Smith, a veteran of the unit. Working with acclaimed writer Anthony Walton, Abdul-Jabbar interviewed surviving members of the battalion to weave together a page-turning narrative based on their memories, stories, and historical accounts, from basic training through the horrors of the battlefield to their postwar experiences.

Trained essentially as a public relations gesture to maintain the support of the black community for the war, the battalion was never intended to see battle. In fact, General Patton originally opposed their deployment, claiming African Americans couldn’t think quickly enough to operate tanks in combatconditions. But in the summer of 1944, following heavy casualties in the fields of France, the Allies—desperate for trained tank personnel—called the battalion up anyway.

While most combat troops fought on the front for a week or two before being rotated back, the men of the 761st served for more than six months, fighting heroically under Patton’s Third Army at the Battle of the Bulge and in the Allies’ final drive across France and Germany. Despite a casualty rate that approached 50 percent and an extreme shortage of personnel and equipment, the 761st would ultimately help liberate some thirty towns and villages, as well as several branch concentration camps. The racism that shadowed them during the war and the prejudice they faced upon their return home are an indelible part of their story. Shining through most of all, however, are the lasting bonds that united them as soldiers and brothers, the bravery they exhibited on the battlefield, and the quiet dignity and patriotism that defined their lives.

“A carefully researched and engrossing account that paints the individual dramas of the tankmen against the backdrop of the war . . . A fine tribute to these unsung heroes and a valuable addition to the literature on African American service in World War II.” —Washington Post Book World

More than a combat story or a segregated version of Stephen Ambrose's Band of Brothers. It's also the story of how black soldiers had to fight (literally and figuratively) for the right to fight the Germans.” —USA Today

“A brilliant and moving narrative that through its imagery helps the reader appreciate the hardness of battle.” —Charlotte Observer

“A slam dunk . . . Well written, well researched and an excellent read . . . Abdul-Jabbar does an incredible job of weaving [the personal stories] into the context of the war as it unfolded.” —Pittsburgh Post-Gazette

“A touching profile of men who fought overt and subtle racism for the chance to prove their mettle, and a poignant reminder of the unreasonable prejudices of that era that almost kept them on the sidelines.” —Sacramento Bee

“An inspirational, moving account of courage and comradeship on the part of exceptional men.” —Military History

“Not only an exciting, informative military history for the general reader but also a revealing and moving record of racism in America’s past.” —Houston Chronicle
Read More