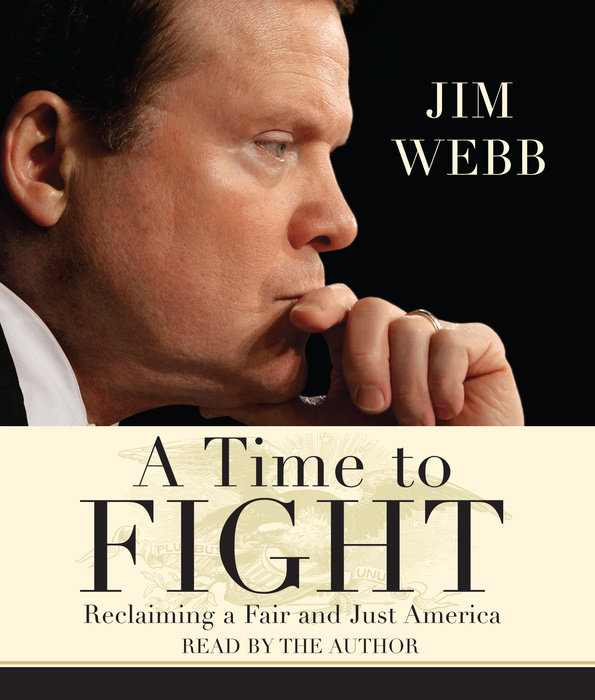 “I’m the only person in the history of Virginia elected to statewide office with a Union card, two Purple Hearts, and three tattoos."

Jim Webb—the bestselling author and now the celebrated, outspoken U.S. Senator from Virginia—presents a clear-eyed, hard-hitting plan of attack for putting government to work for the people, rather than special interests, and for restoring the country's standing around the world.

Infused with the intelligence, force, and firebrand style that has earned Senator Jim Webb enormous national attention from his earlest days in office, A Time to Fight offers a thorough and provocative assessment of the thorniest issues Americans face today, along with cogent solutions drawn from Webb's lifetime of experience as a much-decorated Marine, a widely traveled, award-winning journalist and novelist, a highly placed member of the Reagan administration, a Senator with a son who fought as a Marine in Iraq and, perhaps most important, a proud scion of America's vast but frequently ignored working class.

Webb exposes how America has entered a dangerous, unprecedented cycle of seemingly unsolvable unknowns. Our economic policies, particularly in this age of globalization, have produced widely divergent results leading to a country calcifying along class lines. Our demographic makeup has been altered dramatically and is set to keep on changing, through both legal and illegal immigration. Our editorialists and politicians talk about the American dream, and some urge us to bring democracy to the rest of the world. But more than two million Americans are now in prison, by far the highest incarceration rate in the so-called advanced world. Our foreign policy is confused, without clear direction; increasingly vulnerable to such largely unexamined long-term threats as China's emerging power while it has become bogged down in the never-ending struggles of the Middle East. As this drift toward societal regression has taken place, America's leadership has largely been paralyzed, unable or unwilling to stop the slide. "Where are the leaders?" Webb asks. "Has our political process become so compromised by powerful interest groups and the threat of character assassination that even the best among us will not dare to speak honestly about the solutions that might bring us back to common sense and fundamental fairness?"

Through vivid personal narratives of the struggles members of his family faced, and citing the courageous actions of presidents ranging from Andrew Jackson to Teddy Roosevelt to Dwight Eisenhower, A Time to Fight provides specific, viable ideas for restoring fairness to our economic system, correcting the direction of national security efforts, ending America's military occupation of Iraq, and developing greater government accountability. Webb brings a fresh perspective to political dynamics that have shaped our country. His stirring, populist manifesto calls upon voters to make the choices that will change America for the better in this election season.
Read More
“The best tour of the capitol I’ve ever taken . . . a vivid analysis of the folly of our foreign policy and the unfairness of our domestic one.”
—Margaret Carlson, Bloomberg.com

“A Time to Fight may be the best evocation of the twenty-first century Democratic Party’s emerging style and philosophy. Webb is a . . . terrific writer . . . and now he has written a policy book that is actually worth reading, an unprecedented feat for a sitting politician.”
—Joe Klein, Time

“Jim Webb is a serious writer, not a politician who writes books on the side . . . He offers a fresh approach to politics and stirs excitement.”
—Elizabeth Drew, New York Review of Books