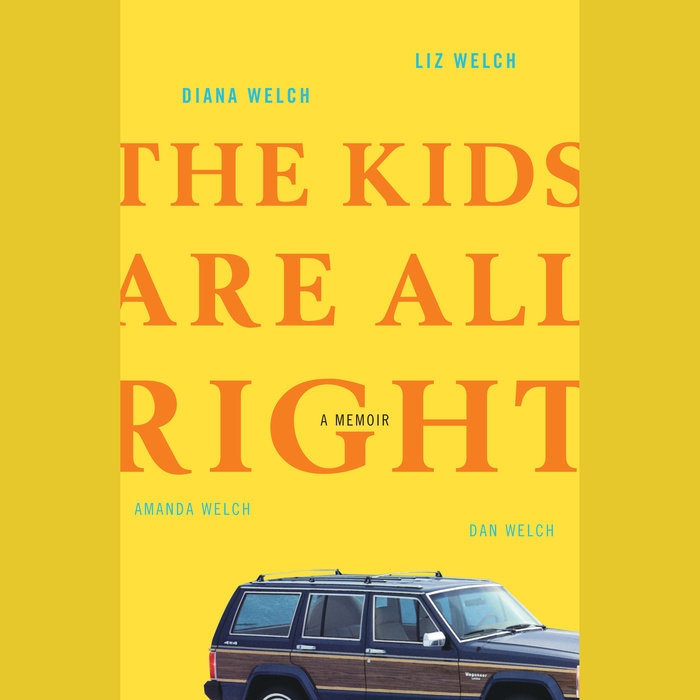 Somehow, between their father’s mysterious death, their glamorous soap-opera-star mother’s cancer diagnosis, and a phalanx of lawyers intent on bankruptcy proceedings, the four Welch siblings managed to handle each new heartbreaking misfortune together.

All that changed with the death of their mother. While nineteen-year-old Amanda was legally on her own, the three younger siblings–Liz, sixteen; Dan, fourteen; and Diana, eight–were each dispatched to a different set of family friends. Quick-witted and sharp-tongued, Amanda headed for college in New York City and immersed herself in an ’80s world of alternative music and drugs. Liz, living with the couple for whom she babysat, followed in Amanda’s footsteps until high school graduation when she took a job in Norway as a nanny. Mischievous, rebellious Dan, bounced from guardian to boarding school and back again, getting deeper into trouble and drugs. And Diana, the red-haired baby of the family, was given a new life and identity and told to forget her past. But Diana’s siblings refused to forget her--or let her go.

Told in the alternating voices of the four siblings, their poignant, harrowing story of un­breakable bonds unfolds with ferocious emotion. Despite the Welch children’s wrenching loss and subsequent separation, they retained the resilience and humor that both their mother and father endowed them with--growing up as lost souls, taking disastrous turns along the way, but eventually coming out right side up. The kids are not only all right; they’re back together.
Read More
A Best Book of 2009, Salon.com

“THE KIDS ARE ALL RIGHT reinvents the genre. It's a choral book, with the point of view shifting between four siblings -- Amanda, Liz, Dan and Diana Welch -- who recount, and disagree about, the disintegration of their family. After their father's sudden death in a car crash comes their mother's slow death from cancer, and then the narrative explodes into pure bedlam: children on their own! The setting is suburban New York and Manhattan, and the time is the '80s, in all their forgotten glory -- no clichés, just detail after detail that eerily reconjured my own childhood in cars, TV, music, products, as I'd long since forgotten it. This is a memoir that always feels alive and true, and one that exists for no other reason than that the story needed to be told.”
—Sean Wilsey, contributor to Salon.com and author of Oh the Glory of It All

"A blisteringly funny, heart-scorching tale of remarkable kids shattered by tragedy and finally brought back together by love."
—People

"Well crafted and beautifully written, not to mention tremendously engrossing and moving. I couldn't put it down and came to love and respect every member of this singular family."
—O, the Oprah Magazine

"After the suspicious demise of dad and loss of mom to cancer, the orphaned Welch children were split up; now grown, and in rocking chorus, Diana, Liz, Amanda, and Dan Welch explain how in the world The Kids Are All Right."
—Vanity Fair

"THE KIDS ARE ALL RIGHT hooks reader's attention from the first jarring sentence and doesn't let go until the very last poignant moment. This memoir reads like a fictional narrative, and readers may find themselves unable to put it down, enthralled as if it were a page-turning murder mystery."
—The Daily Texan

"This touching, funny memoir…is an ode to the strength of sibling bonds"
—Cookie Magazine

"A brutally honest book that captures the journey of four people too young to face the challenged they nevertheless had to face."
—Kirkus

"The Welch family's multivocal story is impossible to put down. I read The Kids Are All Right with awe at the resilience and hope a family can manage in the aftermath of unthinkable loss. The intelligence and strength of the Welch kids confirmed my belief that anything is possible when brothers and sisters come out of tragedy together."
—Danielle Trussoni, author of Falling Through the Earth

"Told with humor, compassion, and humility, and teeming with priceless '80s references, this story of parentless children learning to parent each other grabbed hold of my heart (and attention) and refused to let go. Don't start reading The Kids Are All Right, as I did, at 10 p.m., or you'll lose a night of sleep."
—Heidi Julavits, author of The Uses of Enchantment

"The Kids Are All Right–ingenious, heartfelt, prismatic–is funny and painful in its chronicling of how the chaos of 'normal' childhood can transform into something frighteningly free-form. Here, despite the milieu of privilege (and sometimes because of it), there is hardly the thinnest of buffers as reality at large begins its assault. Each member of this wry, self-deprecating gang recounts his or her story of survival in a way that bumps up against, amplifies, harmonizes with, and even contradicts the others'. Theirs is the fierce and complex love of siblings, and their clear-eyed choral storytelling is a revelation."
—Daphne Beal, author of In the Land of No Right Angles

"The Welch kids grew up like secret agents. Orphans and adventurers in Reagan's ' 80s, young Amanda, Liz, Dan, and Diana were everywhere and nowhere: bluffing their way into nightclubs (when they shouldn't even have been driving), doing homework without a home, making out with rock stars, and then making each other breakfast, lunch, dinner–because who else was there to do it? This is a tragic and heroic story that precisely maps a decade and reads like a spy thriller. The Welch kids are legendary!"
—Sean Wilsey, author of Oh the Glory of It All
Read More