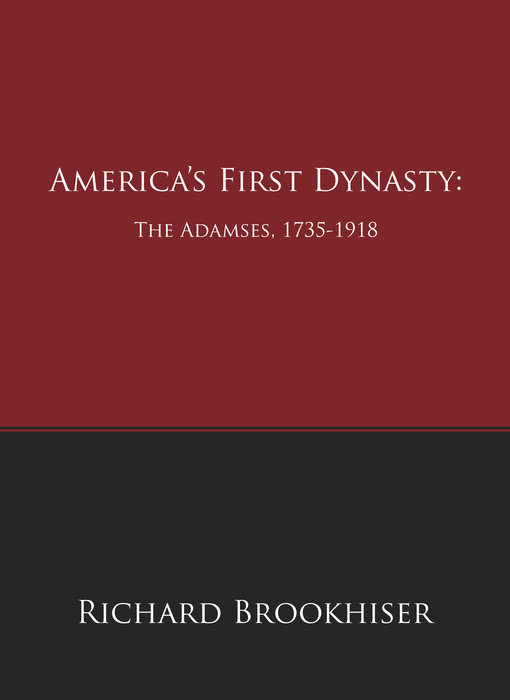 Richard Brookhiser has won a wide and loyal following for his stylish, pointed, and elegant biographies of George Washington and Alexander Hamilton. In America's First Dynasty, Brookhiser tells the story of America's longest and still greatest dynasty -- the Adamses, the only family in our history to play a leading role in American affairs for nearly two centuries. From John, the self-made, tough-minded lawyer who rose to the highest office in the government he helped create; to John Quincy, the child prodigy who grew up amid foreign royalty, followed his father to the White House, and later reinvented himself as a champion of liberty in Congress; to politician and writer Charles Francis, the only well-balanced Adams; to Henry, brilliant scholar and journalist -- the Adamses achieved longer-lasting greatness than any other American family.
Brookhiser's canvass starts in colonial America, when John Adams had to teach himself the law and ride on horseback for miles to find clients. It does not end until after the Titanic sinks -- Henry had booked a room but changed his plans -- and World War I begins, with Henry near the action in France. The story of this single family offers a short course in the nation's history, because for nearly two hundred years Adams history was American history. The Adamses were accompanied by an impressive cast of characters, from George Washington and Thomas Jefferson, to Andrew Jackson and Ulysses Grant, to Teddy Roosevelt. America's First Dynasty offers telling portraits of the great men of our past, and many of the women around them. John and Abigail's great love affair was destined to be repeated by their offspring and offspring's offspring.

As with any family, there was a darker side to the Adams story: many of its members were abject failures. Alcoholism was a familiar specter, and suicide was not unknown. Only one of the four great Adamses was a kind man and father; the others set standards so impossibly high that few of their children could meet them. Yet despite more than a century of difference from John to Henry, certain Adams traits remained the same. In the story of our first and still-greatest family, we can all see something of our own struggles with family, fate, and history.
Read More