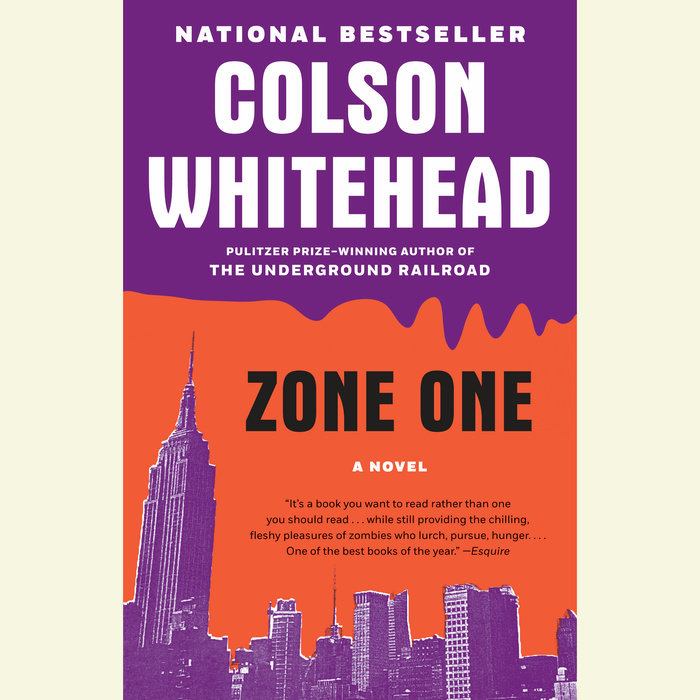 Written by: Colson Whitehead
Read by: Beresford Bennett
9 Hours and 58 Minutes Imprint: Random House Audio Genre: Fiction - Literary Release Date: October 18, 2011
Hurston/Wright Legacy Award
In this wry take on the post-apocalyptic horror novel, a pandemic has devastated the planet. The plague has sorted humanity into two types: the uninfected and the infected, the living and the living dead.

Now the plague is receding, and Americans are busy rebuild­ing civilization under orders from the provisional govern­ment based in Buffalo. Their top mission: the resettlement of Manhattan. Armed forces have successfully reclaimed the island south of Canal Street—aka Zone One—but pockets of plague-ridden squatters remain. While the army has eliminated the most dangerous of the infected, teams of civilian volunteers are tasked with clearing out a more innocuous variety—the “malfunctioning” stragglers, who exist in a catatonic state, transfixed by their former lives.

Mark Spitz is a member of one of the civilian teams work­ing in lower Manhattan. Alternating between flashbacks of Spitz’s desperate fight for survival during the worst of the outbreak and his present narrative, the novel unfolds over three surreal days, as it depicts the mundane mission of straggler removal, the rigors of Post-Apocalyptic Stress Disorder, and the impossible job of coming to grips with the fallen world.

And then things start to go wrong.

Both spine chilling and playfully cerebral, Zone One bril­liantly subverts the genre’s conventions and deconstructs the zombie myth for the twenty-first century.
Read More

PRAISE FOR ZONE ONE:

"THE BEST BOOK OF THE FALL...provides the chilling, fleshy pleasures of zombies who lurch, pursue, hunger...while brilliantly reformulating an old-hat genre."
--Esquire

“If you’re going to break down and read a zombie novel, make it this one.”
--The Wall Street Journal

“[Whitehead] takes the genre of horror fiction, mines both its sense of humor and self-seriousness, and emerges with a brilliant allegory of New York living.”
-- New York Observer

"A zombie story with brains...Readers who wouldn't ordinarily creep into a novel festooned with putrid flesh might be lured by this certifiably hip writer who can spine gore into macabre poetry...Everything comes to life in this perfectly paced, horrific, 40-page finale shot through with grim comedy and desolate wisdom about the modern age in all its poisonous, contaminating rage. It's a remarkable episode, but elevated by the power of Whitehead's prose to the level of those other ash-covered nightmares imagined by T.S. Eliot, F. Scott Fitzgerald and Cormac MacCarthy.
--Ron Charles, The Washington Post

“Whitehead writes with a sharp, descriptive power, reeling off one pithy observation after the next in a way that invests this post-apocalyptic world with a surprisingly tactile presence.”
--The Associated Press

“Whitehead, himself a New Yorker, writes about Spitz’s travails in the brooding, vertical metropolis with a dark poetry, which makes this harrowing tale not just a juicy experiment in genre fiction but a brilliantly disguised meditation on a “flatlined culture” in need of its own rejuvenating psychic jolt.”
--The Seattle Times

"Highbrow novelist Colson Whitehead plunges into the unstoppable zombie genre in this subtle meditation on loss and love in a post-apocalyptic Manhattan, which has become the city that never dies."
--USA Today

"A satirist so playful that you often don't even feel his scalpel, Whitehead toys with the shards of contemporary culture with an infectious glee. Here he upends the tropes of the zombie story in the canyons of lower Manhattan. Horror has rarely been so unsettling, and never so grimly funny."
--The Daily Beast

"Whitehead's uncommonly assured style and his observational gifts make the book a pleasure to read."
--Newsweek

"Whitehead writes with economy, texture and punch. He has a talent for sardonic aphorism and an ear for phonetic intrigue...[Zone One] is a cool, thoughtful and, for all its ludic violence, strangely tender novel, a celebration of modernity and a pre-emptive wake for its demise."
--Glen Duncan, for The New York Times Book Review

“As much as Whitehead was inspired by and occasionally references the ‘70s disaster movies that share DNA with Zone One, it’s his remarkable turns of phrase that lift the story above the gory rublle of a midday matinee. Whether charged with bleak sadness or bone-dry humor, sentences worth savoring pile up faster than the body count.”
--Los Angeles Times

“Zone One takes in all the classic tropes of the zombie novel and blends them to create a novel both melancholy and feverishly exciting, one that is as much about our past and our present as any possible future.”
--Salon.com

“Whitehead writes in cinematic images, with a lucid command of language, a knack for comic invention and a blithe freedom.”
--The Kansas City Star

“Zone One is an off-kilter love letter to a post-apocalypse Manhattan. It’s loaded with gallows survivor humor and absolutely stunning descriptions.”
--The Times-Picayune


“Cinematic in scope and nimble in its use of hard-core gore, [Zone One] is an absorbing read, crammed with thoughtful snapshots of the world the survivors have left behind…a sharp commentary on the rat race of contemporary life.”
--Houston Chronicle

"Colson Whitehead's ZONE ONE isn't your typical zombie novel; it trades fright-night fodder for empathy and chilling realism...yielding a haunting portrait of a lonely, desolate, and uncertain city."
--Elle

"Zone One is a smart, strange, engrossing novel about the end of metaphors and the way that, as Mark Spitz knows all to well, no barrier can hold forever against the armies of death."
--NPR.org

“The kind of smart, funny, pop culture-filled tale that would make George Romero proud…[Whitehead] succeeds brilliantly with a fresh take on survival, grief, 9/11, AIDS, global warming, nuclear holocaust, Katrina, Abu Ghraib, Pol Pot’s Year Zero, Missouri tornadoes, and the many other disasters both natural and not that keep a stranglehold on our fears.”
-- Publishers Weekly, starred review

"This diabolically smart, covertly sensitive, ruminative, and witty zombie nightmare prods us to think about how we dehumanize others, how society tramples and consumes individuals, how flimsy our notions of law and order are, and how easily deluded and profoundly vulnerable humankind is. A deft, wily, and unnerving blend of pulse-elevating action and sniper-precise satire."
--Booklist, starred review

"[Whitehead] sinks his teeth into a popular format and emerges with a literary feast, producing his most compulsively readable work to date...Whitehead transforms the zombie novel into an allegory of contemporary Manhattan (and, by extension, America)."
--Kirkus, starred review

"[Zone One] achieves a kind of miracle of tone. A fragile hope permeates these pages, one so painful and tender, it's heartbreaking...Colson Whitehead is in fresh, appealing and often very fine voice."
--The Guardian

"The stylistic exuberance on display would be overwhelming if it weren't so well controlled, shifting weightlessly from M*A*S*H-style battle narrative to a melancholic Blade Runner-like vision of Urban devastation...The smallest of details is marked by originality of language."
--The New Statesman

"Zone One is not the work of a serious novelist slumming it with some genre-novel cash-in, but rather a lovely piece of writing...Whitehead picks at our nervousness about order's thin grip, suggesting just how flimsy the societal walls are that make possible our hopes and dreams and overly complicated coffee orders. Pretty scary."
--Entertainment Weekly

“Colson Whitehead is quickly becoming one of the country’s most exciting young writers.”
--Rachel Syme for Monkey See, NPR.org

“[Whitehead’s] writing does what writing should do; it refreshes our sense of the world.”
– John Updike, The New Yorker

“Colson Whitehead…[is] a large and vibrant talent…This is the voice of a writer who is watching America carefully.”
–The New York Observer

“Whitehead is making a strong case for a new name of his own: that of the best of the new generation of American novelists.”
—Boston Globe

“No novelist writing today is more engaging and entertaining when it comes to questions of race, class, and commercial culture than Colson Whitehead.”
—USA Today

“Whitehead’s engaged eyes and precise prose show us the small details we overlook and the large ones we fail to absorb.”
—The Miami Herald

“Whitehead [is] one of the city’s and country’s finest young writers.”
–Chicago Tribune

“A scientist of metropolitan encounters, he surveys places where the masses collide, knitting together hundreds of observations and calculations that usually remain unspoken.”
—The Village Voice