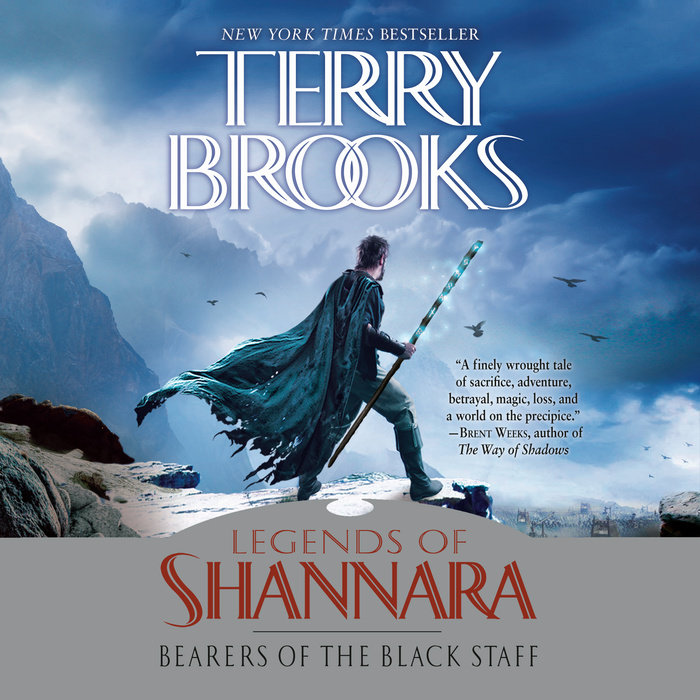 Written by: Terry Brooks
Read by: Phil Gigante
13 Hours and 29 Minutes Imprint: Random House Audio Genre: Fiction - Fantasy - Epic Release Date: May 24, 2022
For more than three decades, New York Times bestselling author Terry Brooks has ruled the epic fantasy realm with his legendary Shannara series. With each new novel the mythos has deepened, ever more fascinating characters have arisen, and increasingly breathtaking vistas of magical adventure have emerged. Now the evolution of one of imaginative fiction’s most beloved worlds continues in the first book of the new series Legends of Shannara: Bearers of the Black Staff.

Five hundred years have passed since the devastating demon-led war that tore apart the United States, leaving nothing but scorched and poisoned ruins, and nearly exterminating humankind. Those who escaped the carnage and blight were led to sanctuary by the boy savior known as the Hawk—the gypsy morph. In an idyllic valley, its borders warded by powerful magic against the horrors beyond, humans, elves, and mutants alike found a place they believed would be their home forever.

But after five centuries, the unimaginable has come to pass: The cocoon of protective magic surrounding the valley has vanished. When Sider Ament, the only surviving descendant of the Knights of the Word, detects unknown predators stalking the valley, he fears the worst. And when Panterra Qu and Prue Liss, expert Trackers from the human village of Glensk Wood, find two of their own gruesomely killed, there can be no doubt: The once safe haven of generations has been laid bare and made vulnerable to whatever still lurks in the wasteland of the outside world.

Together, Ament, the two young Trackers, and a daring Elf princess race to spread word of the encroaching danger—and spearhead plans to defend their ancestral home. But suspicion and hostility among their countrymen threaten to doom their efforts from within—while beyond the breached borders, a ruthless Troll army masses for invasion. And in the thick of it all, the last wielder of the black staff and its awesome magic must find a successor to carry on the fight against the cresting new wave of evil.
Read More
"Terry Brooks displays the sure hand of a master. Bearers of the Black Staff is filled with iconic characters and heroes not diminished but made human by their flaws. A finely-wrought tale of sacrifice, adventure, betrayal, magic, loss, and a world on the precipice."--Brent Weeks, author of The Way of Shadows