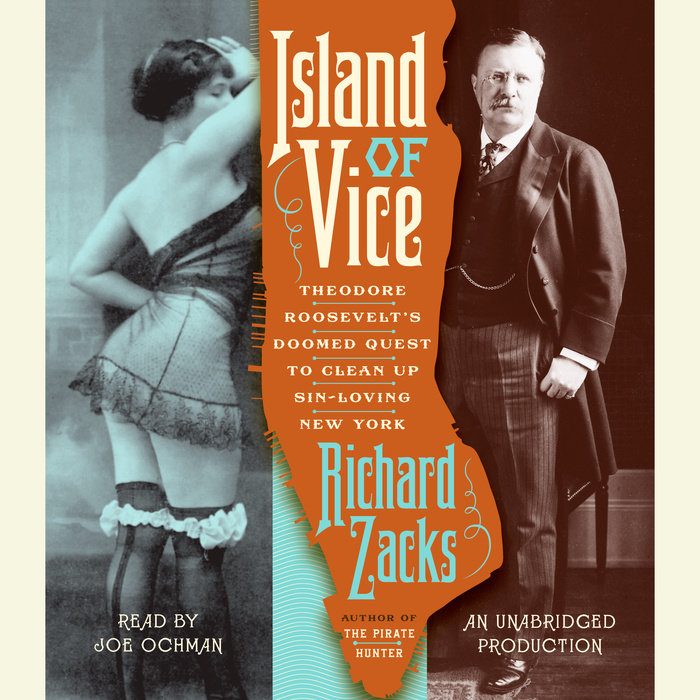 In the 1890s, New York City was America’s financial, manufacturing, and entertainment capital, and also its preferred destination for sin, teeming with 40,000 prostitutes, glittering casinos, and all-night dives packed onto the island’s two dozen square miles. Police captains took hefty bribes to see nothing while reformers writhed in frustration.
In Island of Vice, bestselling author Richard Zacks paints a vivid picture of the lewd underbelly of 1890s New York, and of Theodore Roosevelt, the cocksure crusading police commissioner who resolved to clean up the bustling metropolis, where the silk top hats of Wall Street bobbed past teenage prostitutes trawling Broadway.
Writing with great wit and zest, Zacks explores how Roosevelt went head-to-head with corrupt Tammany Hall, took midnight rambles with muckraker Jacob Riis, banned barroom drinking on Sundays, and tried to convince 2 million New Yorkers to enjoy wholesome family fun. In doing so, Teddy made a ruthless enemy of police captain “Big Bill” Devery, who grew up in the Irish slums and never tired of fighting “tin soldier” reformers. Roosevelt saw his mission as a battle of good versus evil; Devery saw prudery standing in the way of fun and profit.
When righteous Roosevelt’s vice crackdown started to succeed all too well, many of his own supporters began to turn on him. Cynical newspapermen mocked his quixotic quest, his own political party abandoned him, and Roosevelt discovered that New York loves its sin more than its salvation.
Zacks’s meticulous research and wonderful sense of narrative verve bring this disparate cast of both pious and bawdy New Yorkers to life. With cameos by Stephen Crane, J. P. Morgan, and Joseph Pulitzer, plus a horde of very angry cops, Island of Vice is an unforgettable portrait of turn-of-the-century New York in all its seedy glory, and a brilliant portrayal of the energetic, confident, and zealous Roosevelt, one of America’s most colorful public figures.
Read More
Praise for ISLAND OF VICE:

"Excellent...A fish-out-of-water comedy, in that it tells the story of what happens when one of the virtuous clubmen--a square, incorruptible, 'law-and-order Republican'--is placed in charge of the New York Police Department."
--The Wall Street Journal

"A fascinating narrative history of Theodore Roosevelt's doomed struggle to put a lid on crime in New York during his tenure as Police Commissioner starting in 1895...One of the achievements of Island of Vice is that Zacks penetrates beneath the bluster into the psychology of this strange, restless man."
--Maureen Corrigan, NPR

"In his delightful and often hilarious ode to Manhattan, Island of Vice, Richard Zacks makes a comparison to another famously wicked metropolis: "As in ancient Rome, the vitality of New York City sometimes seems to come more from the crooks than the do-gooders."
--USA Today

"Richard Zacks, in Island of Vice: Theodore Roosevelt's Doomed Quest to Clean Up Sin-Loving New York, tells the story of Roosevelt's two-year campaign with gusto and authority and the wry observations of an author who knows how it will all predictably turn out."
-- The New York Times Book Review

“Here is young Teddy Roosevelt as the reformist New York City Police Commissioner  confronted in 1895 with a cabal of  unaccountably wealthy police officials, whole neighborhoods of brothels, and the paws of the Tammany Tiger in everything. A delicious municipal history, impeccably researched, excitingly told.”
--E. L. Doctorow, award-winning author of Ragtime

"In the early 1890s, New York was America's vice capital, with thousands of prostitutes and countless all-night gambling halls. But then, in 1895, Teddy Roosevelt was appointed police commissioner. Richard Zacks paints an engagingly vivid picture of the rise of Roosevelt, the birth of the reform movement, and the creation of 20th century America. Roosevelt comes alive with all of his blustery and belligerent passion, and so does New York City."
--Walter Isaacson, bestselling author of Steve Jobs and Einstein: His Life and Universe

“From the opening pages of his rousing new book, Island of Vice, Richard Zacks plunges readers into the filth, debauchery and corruption of 1890s New York. When an ambitious young Theodore Roosevelt strides in to clean up the mess, the story, already brimming with incredible characters and jaw-dropping details, only gets better. “
--Candice Millard, bestselling author of The River of Doubt and Destiny of the Republic

“Island of Vice is as thrilling as the low dives and wanton women it describes.  This is the real-life story of an American icon, Teddy Roosevelt, battling vice and as colorful an array of crooked politicians as Tammany ever assembled, in raucous old, gas-light New York.  Zacks does a superb job as both a historian and a storyteller.”
--Kevin Baker, bestselling author of Paradise Alley

“An irresistible force – young Theodore Roosevelt, the police commissioner, determined to wipe out vice – meets an immoveable object – the corrupt, pleasure-loving city of New York in the 1890s.  And the result is: a whole lot of fun.  What a marvelous time Richard Zacks must have had researching this story.  The information is fascinating, the amazing tale moves with a headlong pace. I'm sure ISLAND OF VICE will be a best-seller, and it deserves to be.”
--Edward Rutherfurd, bestselling author of New York: The Novel

“It’s been said that New York City politics were invented to scare young children. True, according to Richard Zacks whose riveting account lays bare the depravity and corruption of the Gilded Age – and the failed crusade of Police Commissioner Theodore Roosevelt to stop it. A must-read for any student of Gotham.”
--Teresa Carpenter, author of New York Diaries, and winner of the Pulitzer Prize for feature writing

"A lively and often entertaining portrayal of urban life at the close of the 19th century."
--The Chrstian Science Monitor

"Zacks probes this period of Roosevelt’s life with exhaustive details, drama, and intrigue. The 40 pages of bibliographic notes indicate the five years of research that went into this remarkable re-creation of fin-de-siècle New York. Writing with a prismatic, poetic slant, Zacks unveils a colorful portrait of a volcanic Roosevelt towering over the soul of the city."
--Publishers Weekly

“Set in gas-lit 1890s Manhattan, Zacks’ depiction of virtue versus vice pits Theodore Roosevelt against a gallery of antagonists...[TR’s] fight is a fascinating story that Zacks relays with zest. His pungent vignettes of sinful establishments and the police who ‘protected’ them hang on the main plot of TR’s campaigns to dismiss bad cops and enforce long-dormant alcohol and prostitution laws, which often resulted in proceedings showcasing TR at his most combatively indignant. His research artfully attired in active prose, Zacks writes a winner for TR and NYC buffs.”
--Booklist 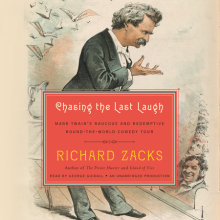