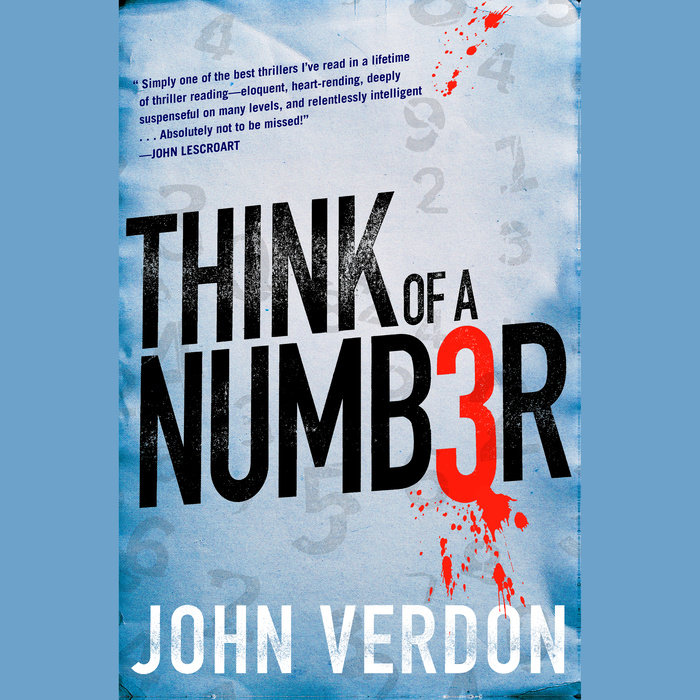 The first book in the Dave Gurney series, Think of a Number is a heart-pounding game of cat and mouse that grows relentlessly darker and more frightening as its pace accelerates

Threatening letters arrive in the mail over a period of weeks, ending with a simple declaration: “Think of any number . . . picture it . . . now see how well I know your secrets.” Those who comply find that the letter writer has predicted their random choice exactly. But when oddities that begin as a diverting puzzle quickly ignite into a massive serial murder investigation, police are confronted with a baffling killer, one who is fond of rhymes filled with threats and warnings, whose attention to detail is unprecedented, and who has an uncanny knack for disappearing into thin air.

Brought in as an investigative consultant, Dave Gurney, a recently retired NYPD homicide investigator, soon accomplishes deductive breakthroughs that leave local police in awe. Yet, even as he matches wits with his seemingly clairvoyant opponent, Gurney’s tragedy-marred past rises up to haunt him, his marriage approaches a dangerous precipice, and he wonders if he’s met an adversary who can’t be stopped.

A work that defies easy labels—at once a propulsive masterpiece of suspense and an absorbing immersion in the lives of characters so real we seem to hear their heartbeats—Think of a Number is a novel you’ll not soon forget.
Read More

"[An] inventive and entertaining first thriller. The hard-edged characters and gritty plot recall Chandler's "mean streets," but the ornate puzzles laid before Verdon's detective might have challenged the "little grey cells" of Hercule Poirot."--Washington Post

"Mr. Verdon was an advertising executive who retired to upstate New York before deciding on a more artistic pursuit. And if THINK OF A NUMBER is any indication, he'll have no trouble forgetting about that day job. The transition couldn't be much smoother...Verdon is masterly at keeping Gurney [his protagonist] a step ahead of the reader [and] the murder itself is a pretty crafty piece of legerdemain....[The novel features] the kind of head-scratching setup that would get Sherlock Holmes off his cocaine [and] Gurney has the same precision, logic and thirst for clarity."--New York Times

"Mostly what makes this work is the intricate fabric that debut novelist Verdon weaves, as complications twist into what seems to be an impossible knot."--Chicago Sun-Times

"Good writing and good storytelling often aren’t the same thing. Verdon combines them masterfully...Here’s hoping Verdon has what it takes to churn out more books like this."--Newark Star Ledger

“Verdon’s brought back crimes of impossibility, starting with the titular parlor game trifle and escalating until we're deep into serial murder territory. Verdon is a master at controlling pace, illustrating the story of a rich but complicated marriage, pondering what it means to be sucked back into your life's work even if it might kill you, and demanding that the reader use his or her brain to figure out what comes next. When you're finished, you may not trust silly parlor games ever again.”--Salon

“Savor the sense of loss that haunts this strong debut.”--Houston Chronicle

“John Verdon has…created an incredible crime novel which could give Steig Larsson a run for his well-earned money…All of the characters are incredibly well developed…The descriptions of scenes make you feel like you are there, and the plot is brilliant.”--The Herald-Dispatch (West Virginia)

“Will hook just about any reader…An astoundingly addictive work filled with real life characters that jump off the page into a daring and skillful plot, this book will leave you stumped and hungry for more…THINK OF A NUMBER excels in its interweaving of wonderful characterization and psychological Insight…[Verdon] has created a book for all readers, not just those who revel in the thriller genre.”– New York Journal of Books

“The mystery is brilliantly executed…If you read only one thriller this year, make it THINK OF A NUMBER.”-- Bookloons

“Think of a number between one and ten…Now multiply that by zero. Which is how many times you’ll put this book down.” --Mystery Scene

"The numbers game gets a murderous spin in Verdon’s deft, literate debut."--Publishers Weekly

"Verdon’s superb debut novel is a riveting thriller with a wonderfully baffling crime. Think of a Number is a 10, and crime fans of almost every persuasion will love it. An outstanding debut."— Thomas Gaughan, Booklist (Starred Review)

“Addictive and thoroughly engrossing…In THINK OF A NUMBER, Verdon plays deliciously on our deepest, most primal fears, portraying a killer who seems to see right into people’s minds.  Few readers will be able to resist the lure of watching an unstoppable detective track an uncatchable killer.  This tale will grab hold of you like a steel jaw trap."--Joseph Finder, New York Times bestselling author of VANISHED

“Verdon's premise is clever and his police work convincing, which right there might be enough; but the real joy of this book is its characters.  Each one, no matter how minor, is unique and beautifully observed.  THINK OF A NUMBER had me from the opening pages and carried me right along.”-- S.J. Rozan, Edgar-winning author of THE SHANGHAI MOON

"Spectacular and mind-bending, THINK OF A NUMBER is the best thriller I've read in a long, long time. John Verdon's writing is so polished, so nuanced, it makes me envious that I didn't write this terrific novel."-- Tess Gerritsen, New York Times bestselling author of ICE COLD

“With its edge-of-the-chair suspense, memorable characters that jump off the pages, and elegant and deft writing, John Verdon's THINK OF A NUMBER is a stunning debut.”--Faye Kellerman, New York Times bestseller author of STONE KISS and THE FORGOTTEN

“THINK OF A NUMBER is truly unputdownable.  Rarely have I read a debut novel that has gripped me as this one has from the first page to the last.  This book doesn’t just entertain – it engages you and draws you immediately into the lives of the characters, who are as real as real can be.  John Verdon has written a flawless novel about flawed people and he’s written it beautifully.  I hope we see a lot more of John Verdon and his smart protagonist, Dave Gurney, in years to come.”--Nelson DeMille, New York Times bestseller author of THE LION’S GAME, THE GENERAL’S DAUGHTER and GOLD COAST

"John Verdon's THINK OF A NUMBER is one of the finest thrillers I've read in years. I devoured it.  Consistently intelligent, fast-paced, filled with clever twists and psychological insight, and characters that come alive on every page, it entertains from the opening set-piece, right through the tension-filled ending. In a genre frequently and sadly known for delivering more of the same old familiar stuff, THINK OF A NUMBER stands out as original and exciting. If there were a line-up of upcoming mystery-thriller suspects,  I have little doubt that just about every witness would pick out THINK OF A NUMBER.”--John Katzenbach, New York Times bestselling author of THE TRAVELER, JUST CAUSE and HART’S WAR

“John Verdon’s THINK OF A NUMBER is simply one of the best thrillers I’ve read in a lifetime of thriller reading -- eloquent, heart-rending, deeply suspenseful on many levels, and relentlessly intelligent.  The characters live and breathe, the plot is diabolically clever and airtight, and the prose is sublime.  Absolutely not to be missed! At one stroke, Verdon establishes himself as a bright star in the thriller firmament.”--John Lescroart, New York Times bestselling author of  THE SUSPECT, BETRAYAL and A PLAGUE OF SECRETS

“Just when you think the serial killer thriller has been done to death, someone comes along and revives it!  THINK OF A NUMBER is written with pace, style and intelligence. It has rounded characters, teasing puzzles, and lots of tension. The number I'm thinking of is 1!”--Reginald Hill, author of RULING PASSION and MIDNIGHT FUGUE and winner of the Crime Writer’s Association Dagger Award for Lifetime Achievement

"THINK OF A NUMBER is a subtle and intelligent thriller of the first order.  With his gripping premise, well-drawn characters, and relentless escalation of suspense, John Verdon has penned an exciting debut.  Don't miss it."--Lisa Unger, New York Times bestselling author of DIE FOR YOU

“THINK OF A NUMBER is a dark, disturbing, and completely compelling debut.
It's got menacing puzzles you won't be able to figure out, a villain who will raise the hairs on the back of your neck, and a wonderful main character in retired homicide cop Dave Gurney. The pages turn themselves.”--Spencer Quinn, New York Times bestselling author of DOG ON IT!

"I loved this book. It’s at once familiar to thriller readers and something incredibly new. It’s a puzzle mystery and a police procedural and a cautionary tale about loss and love—the book literally has something for everyone, with a conclusion so eerily perfect it could have been scripted by Hitchcock himself. This is a thriller that will rewrite the rules of the genre."—Will Lavender, New York Times bestselling author of OBEDIENCE 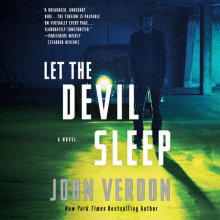 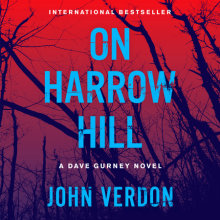 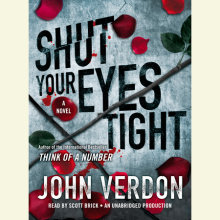