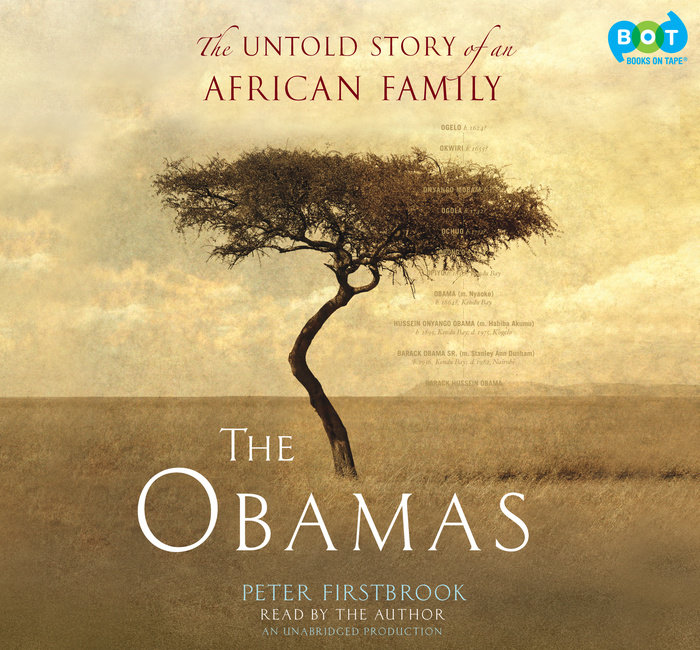 In the first in-depth history of the Obama family, Peter Firstbrook recounts a journey that starts in a mud hut by the White Nile and ends seven centuries later in the White House. Interweaving oral history and tribal lore, interviews with Obama family members and other Kenyans, the writings of Kenyan historians, and original genealogical research, Firstbrook sets the fascinating story of the president’s family against the background of Kenya’s rich culture and complex history.

From the tribe’s cradleland in southern Sudan, he follows the family generation by generation, tracing the paths of the famous Luo warriors—Obama’s direct ancestors—and vividly illuminating Luo politics, society, and traditions. Firstbrook also brings to life the impact of English colonization in Africa through the eyes of President Obama’s grandfather Onyango. And Firstbrook delves into the troubled life of Obama’s father, a promising young man whose aspirations were stymied by post-independence tribal politics and a rash tendency toward self-destruction—two factors that his family believes contributed to his death in 1982. The Obamas reveals a family history—epic in scope yet intimate in feel—that is truly without precedent.
Read More
"Not only does [Firstbrook's] book dig where other researchers have failed to look, but it also provides a compelling narrative about a place, a tribe, and the difficulties of uniting humanity across boundaries...A contemporary family detective story, with Firstbrook as the guide and eventually the answer man to questions directly related to the Obama family. In fact, Firstbrook may now know more about Obama’s roots than does the president himself."
—Steve Weinberg, Christian Science Monitor

"Like few others in modern history, President Barack Hussein Obama has been dissected within every fiber of his DNA. The Obamas stands apart by literally finding where the President comes from."
—Essence

"Firstbrook is nothing if not intrepid...It is not what happened in America that is the point of this assiduous book, which will surely be helpful to future Obama scholars. It is the telling of the story of a large and extended African family that has played a significant and unforgettable role in history across two continents."
—Washington Post

"Lively, sweeping, grand, horrifying, and occasionally funny; a historical biography of a continent, a way of life, a people and, somewhere along the way, the Leader of the Free World...Though some tales will make you gulp, he also entertains readers with cultural explanations, imaginative scenarios, hypothetical situations, and small anecdotes. I enjoyed that, partly for the way Firstbrook presents the information and partly for its relevance in today’s world, as compared to yesterday’s way of life...For the curious, or anyone who just loves a great story, “The Obamas” deserves a closer look.” —Terri Schlichenmeyer, TheTimesWeekly.com (Joliet, Ill.)