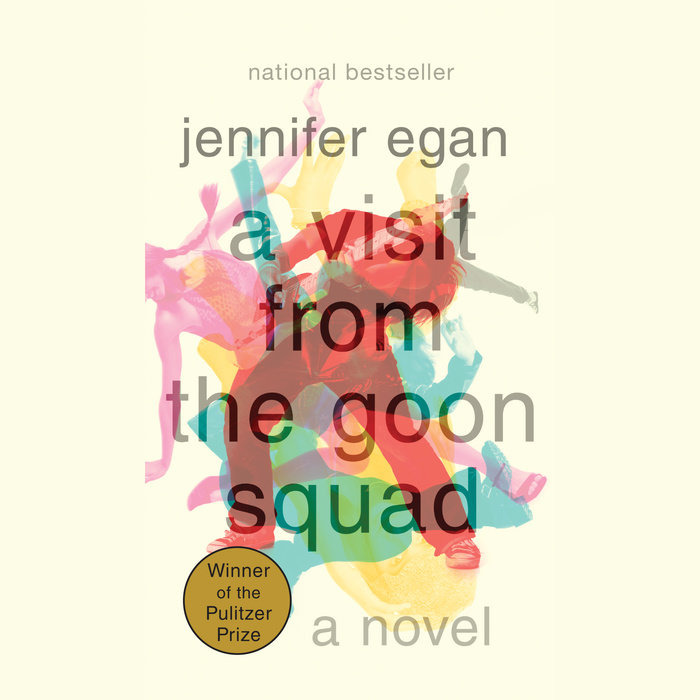 Jennifer Egan’s spellbinding interlocking narratives circle the lives of Bennie Salazar, an aging former punk rocker and record executive, and Sasha, the passionate, troubled young woman he employs. Although Bennie and Sasha never discover each other’s pasts, the reader does, in intimate detail, along with the secret lives of a host of other characters whose paths intersect with theirs, over many years, in locales as varied as New York, San Francisco, Naples, and Africa.

We first meet Sasha in her mid-thirties, on her therapist’s couch in New York City, confronting her long-standing compulsion to steal. Later, we learn the genesis of her turmoil when we see her as the child of a violent marriage, then as a runaway living in Naples, then as a college student trying to avert the suicidal impulses of her best friend. We plunge into the hidden yearnings and disappointments of her uncle, an art historian stuck in a dead marriage, who travels to Naples to extract Sasha from the city’s demimonde and experiences an epiphany of his own while staring at a sculpture of Orpheus and Eurydice in the Museo Nazionale. We meet Bennie Salazar at the melancholy nadir of his adult life—divorced, struggling to connect with his nine-year-old son, listening to a washed-up band in the basement of a suburban house—and then revisit him in 1979, at the height of his youth, shy and tender, reveling in San Francisco’s punk scene as he discovers his ardor for rock and roll and his gift for spotting talent. We learn what became of his high school gang—who thrived and who faltered—and we encounter Lou Kline, Bennie’s catastrophically careless mentor, along with the lovers and children left behind in the wake of Lou’s far-flung sexual conquests and meteoric rise and fall.

A Visit from the Goon Squad is a book about the interplay of time and music, about survival, about the stirrings and transformations set inexorably in motion by even the most passing conjunction of our fates. In a breathtaking array of styles and tones ranging from tragedy to satire to PowerPoint, Egan captures the undertow of self-destruction that we all must either master or succumb to; the basic human hunger for redemption; and the universal tendency to reach for both—and escape the merciless progress of time—in the transporting realms of art and music. Sly, startling, exhilarating work from one of our boldest writers.
Read More

“Pitch perfect. . . . Is there anything Egan can’t do in this mash-up of forms? Write successfully in the second person? Check. Parody celebrity journalism and David Foster Wallace at the same time? Check. Make a moving narrative out of a PowerPoint presentation? Check. . . . Although shredded with loss, A Visit From the Goon Squad is often darkly, rippingly funny. Egan possesses a satirist’s eye and a romance novelist’s heart. . . . No one is beyond the pale of her affection; no one is spared lampooning. . . . For a book so relentlessly savvy about the digital age and its effect on how we experience time (speeded up, herky-jerky, instantaneous, but also full of unbearable gaps and pauses), A Visit From the Goon Squad is remarkably old-fashioned in its obsession with time’s effects on characters, that preoccupation of those doorstop 19th-century novels.”
—Will Blythe, The New York Times Book Review (cover review)

“If Jennifer Egan is our reward for living through the self-conscious gimmicks and ironic claptrap of postmodernism, then it was all worthwhile. . . . A deeply humane story about growing up and growing old in a culture corroded by technology and marketing. . . . [A] triumph of technical bravado and tender sympathy. . . . Here, in ways that surprise and delight again, she transcends slick boomer nostalgia and offers a testament to the redemptive power of raw emotion in an age of synthetic sound and glossy avatars. Turn up the music, skip the college reunion and curl up with The Goon Squad instead.”
—Ron Charles, The Washington Post

“It may be the smartest book you can get your hands on this summer.”
—Carolyn Kellogg, The Los Angeles Times

“Jennifer Egan is a rare bird: an experimental writer with a deep commitment to character, whose fiction is at once intellectually stimulating and moving. . . . It’s a tricky book, but in the best way. When I got to the end, I wanted to start from the top again immediately, both to revisit the characters and to understand better how the pieces fit together. Like a masterful album, this one demands a replay.”
—Malena Watrous, The San Francisco Chronicle

“For all its postmodern flourishes, Goon Squad is as traditional as a Dickens novel. . . . Her aim is not so much to explode traditional storytelling as to explore how it responds to the pressures and opportunities of the digital age. Egan herself does not appear to be on Facebook, but A Visit From the Goon Squad will likely make her many new friends.”
—Jennie Yabroff, Newsweek

“Jennifer Egan’s A Visit from the Goon Squad is a singular work of fiction in both senses of the word. It’s as if the author has taken an epic novel covering five decades and expertly filleted it, casting aside excess characters and years to come away with a narrative that is wide-ranging but remarkably focused. . . . Vibrant and winning. . . . While this is occasionally a wistful book, it isn’t’ sad. Each narrative disorientation and subsequent reorientation reminds us of how we weave in and out of one another’s lives, staying connected through memory—our shield against the goon squad. By the time we get to the last page of Egan’s book . . . we’re left wanting more.”
—Marty Pols, Time

“Clever. Edgy. Groundbreaking. . . . For all of its cool, languid, arched-eyebrow sophistication—that’s the part that will make you think ‘Didion’—and for all of the glitteringly gorgeous sentences that flit through its pages like exotic fish—that’s the DeLillo part—the novel is actually a sturdy, robust, old-fashioned affair. It features characters about whom you come to care deeply as you watch them doing things they shouldn't, acting gloriously, infuriatingly human.”
—Julia Keller, The Chicago Tribune

“Jennifer Egan has accomplished the tricky feat of using metafiction techniques without sacrificing old-fashioned story-telling. . . . A Visit from the Goon Squad has a circuitous structure that seems almost designed for our Internet rewired brains.”
—Steven Kurutz, The Wall Street Journal

“In her audacious, extraordinary fourth novel, A Visit from the Goon Squad, Jennifer Egan uses the pop-music business as a prism to examine the heedless pace of modern life, generational impasses, and the awful gravity of age and entropy. . . . A Visit from the Goon Squad is fascinating for its daring scope and fractured narrative, but along the way, Egan crafts some brilliant scenes. . . . A rich and rewarding novel.”
—David Hiltbrand, Philadelphia Inquierer

“Grounded in the passions and frustrations of a record producer and his nervy assistant, Jennifer Egan’s bravura fifth book, A Visit from the Goon Squad, samples from different eras (the glory days of punk; a slick, socially networked future) and styles (sly satire, moving tragedy, even PowerPoint) to explore the interplay between music and the rough rhythms of life.”
—Megan O’Grady, Vogue

“Wildly ambitious. . . . A tour de force. . . . Music is both subject and metaphor as Egan explores the mutability of time, destiny, and individual accountability post-technology.”
—Liza Nelson, O, The Oprah Magazine

“A Visit from the Goon Squad [is] an exhilarating, big-hearted, three-headed beast of a story. . . . [A] genius as a writer. . . . We see ourselves in all of Egan’s characters because their stories of heartbreak and redemption seem so real they could be our own, regardless of the soundtrack. Such is the stuff great novels are made of.”
—Kimberly Cutter, Marie-Claire

“[Egan is] a boldly intellectual writer who is not afraid to apply her equally powerful intuitive skills to her ambitious projects. . . . While it’s a time-trekking, tech-freakin’ doozie, the characters’ lives and fates claim the story first and foremost, and we are pulled right in. . . . Brilliantly structured, with storylike chapters.”
—Lisa Shea, Elle

“Frequently dazzling. . . . Egan’s expert flaying of human foibles has the compulsive allure of poking at a sore tooth: excruciating but exhilarating too. A-”
—Leah Greenblatt, Entertainment Weekly

“Remarkable . . . A finely braided meditation on time, memory, pop culture, and the perils of growing up in America.”
—Paul Vidich, Narrative Magazine

“Poignant. . . . A nice reminder that even in the age of Kindles and Facebook, ambitious fiction is still one of the best tools available to help us understand the rapidly changing world. . . . Her startling, apocalyptic take on the near future is all the more chilling for its utter plausibility, and brings the realization that Egan was up to much more here than just trying to reinvent the novel's format. You’ll want to recommend it to all your Facebook friends.”
—Patrick Condon, Associated Press

“Forget what literati the world over say about the demise of the “big” novel, the kind that patiently threads its way through the tangled knot of humankind’s shared urges, fears, frailties and joys. A Visit from the Goon Squad admittedly cannot be described either as a novel or a collection of short stories, but it is a great work of fiction, a profound and glorious exploration of the fullness and complexity of the human condition. . . . An extraordinary new work of fiction.”
—Rayyan Al-Shawaf, The New York Press

“Poetry and pathos . . . Egan conveys personality so swiftly and with such empathy. . . . Yet she is not a conventional dystopian novelist; distinctions between the virtual and the real may be breaking down in this world, but her characters have recognizable emotions and convictions, which is why their compromises and uncertainties continue to move us. . . . Another ambitious change of pace from talented and visionary Egan, who reinvents the novel for the 21st century while affirming its historic values.”
—Kirkus Reviews (starred review)

“Egan is a writer of cunning subtlety, embedding within the risky endeavors of seductively complicated characters a curious bending of time . . . a hilarious melancholy, enrapturing, unnerving, and piercingly beautiful mosaic of a novel.”
—Donna Seaman, Booklist (starred review)

“The star-crossed marriage of lucid prose and expertly deployed postmodern switcheroos that helped shoot Egan to the top of the genre bending new school is alive and well in this graceful yet wild novel . . . powerful.”
—Publishers Weekly (starred review) 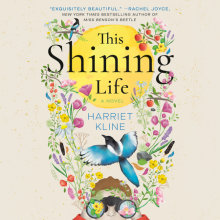 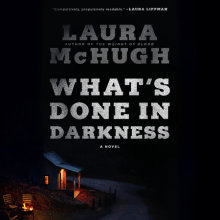 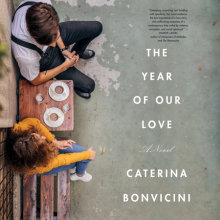