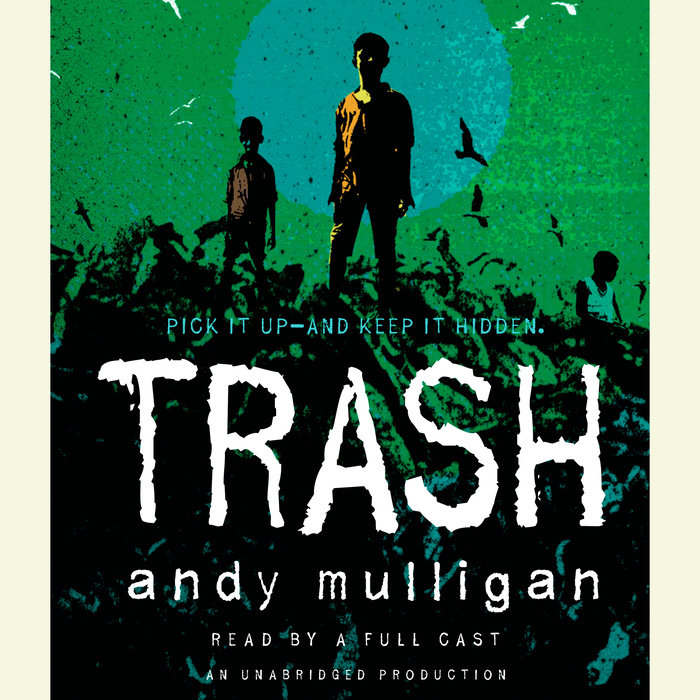 Written by: Andy Mulligan
Read by: Full Cast
5 Hours and 20 Minutes Imprint: Listening Library Ages 12 and up Release Date: October 26, 2010
New Jersey Garden State Teen Book AwardIllinois Rebecca Caudill Young Readers AwardConnecticut Nutmeg Children's Book AwardMaryland Black-Eyed Susan AwardNew York State Charlotte AwardRhode Island Teen Book AwardYoung Adult Services Division, School Library Journal Author Award
In an unnamed Third World country, in the not-so-distant future, three “dumpsite boys” make a living picking through the mountains of garbage on the outskirts of a large city.
One unlucky-lucky day, Raphael finds something very special and very mysterious. So mysterious that he decides to keep it, even when the city police offer a handsome reward for its return. That decision brings with it terrifying consequences, and soon the dumpsite boys must use all of their cunning and courage to stay ahead of their pursuers. It’s up to Raphael, Gardo, and Rat—boys who have no education, no parents, no homes, and no money—to solve the mystery and right a terrible wrong.
Andy Mulligan has written a powerful story about unthinkable poverty—and the kind of hope and determination that can transcend it. With twists and turns, unrelenting action, and deep, raw emotion, Trash is a heart-pounding, breath-holding novel.

“Trash is a compelling read. The action is riveting and the secret codes throughout will appeal mystery fans” - School Library Journal, starred review

“This gripping book engages readers both as an adventure and as a social justice story. Readers will be satisfied by the cinematic conclusion and the noble decision the heroes make.” - Publishers Weekly, starred review

"The three boys, and others, act as alternating narrators of the story, giving vivid descriptions of their lives. In spite of this, the boys’ hope and determination for justice and the dilemmas they face with so much courage will impress readers. Recommended." - Library Media Connection