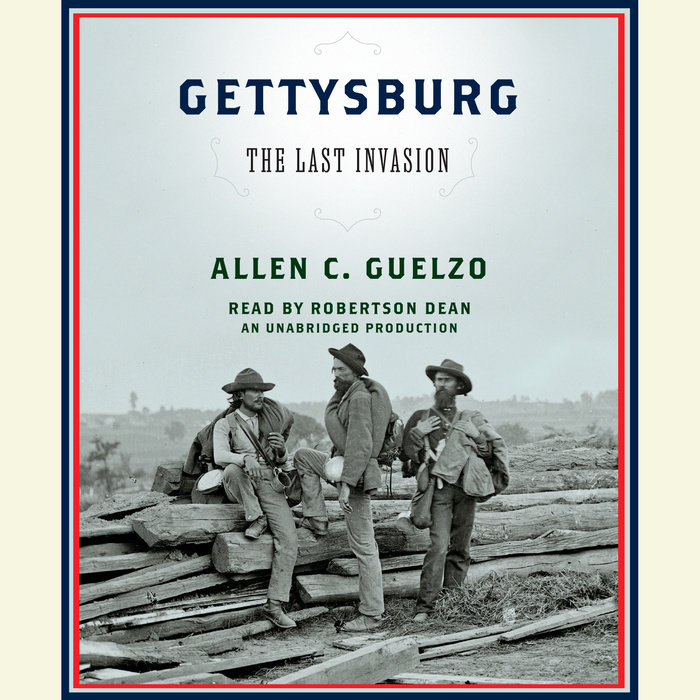 From the acclaimed Civil War historian, a brilliant new history—the most intimate and richly readable account we have had—of the climactic three-day battle of Gettysburg (July 1–3, 1863), which draws the reader into the heat, smoke, and grime of Gettysburg alongside the ordinary soldier, and depicts the combination of personalities and circumstances that produced the greatest battle of the Civil War, and one of the greatest in human history.

Of the half-dozen full-length histories of the battle of Gettysburg written over the last century, none dives down so closely to the experience of the individual soldier, or looks so closely at the sway of politics over military decisions, or places the battle so firmly in the context of nineteenth-century military practice. Allen C. Guelzo shows us the face, the sights, and the sounds of nineteenth-century combat: the lay of the land, the fences and the stone walls, the gunpowder clouds that hampered movement and vision; the armies that caroused, foraged, kidnapped, sang, and were so filthy they could be smelled before they could be seen; the head-swimming difficulties of marshaling massive numbers of poorly trained soldiers, plus thousands of animals and wagons, with no better means of communication than those of Caesar and Alexander.

What emerges is an untold story, from the trapped and terrified civilians in Gettysburg’s cellars to the insolent attitude of artillerymen, from the taste of gunpowder cartridges torn with the teeth to the sounds of marching columns, their tin cups clanking like an anvil chorus. Guelzo depicts the battle with unprecedented clarity, evoking a world where disoriented soldiers and officers wheel nearly blindly through woods and fields toward their clash, even as poetry and hymns spring to their minds with ease in the midst of carnage. Rebel soldiers look to march on Philadelphia and even New York, while the Union struggles to repel what will be the final invasion of the North. One hundred and fifty years later, the cornerstone battle of the Civil War comes vividly to life as a national epic, inspiring both horror and admiration.

"What is there left to say about Gettysburg? In Allen Guelzo's deft, scholarly hands, plenty. Gettysburg: The Last Invasion is fresh, fascinating, and compellingly provocative. It is a marvelous book that deserves to be read and savored. And it deserves to be on the bookshelf of all Civil War buffs."
—Jay Winik, author of April 1865

“[W]onderful . . . a deeper understanding of the invasion . . . Guelzo’s book is an extremely timely reminder that the American experiment has not been, as the Founders asserted, a 'self-evident truth' but in fact a highly debatable proposition that needed to be proved, not just in July 1863 at Gettysburg but on many days and in many places since.”
—The Wall Street Journal

“Despite all that has been written about the battle of Gettysburg, Allen Guelzo provides new information and insights in this stirring account. Unafraid to challenge conventional wisdom, he praises General O. O. Howard, maintains that General George Meade did indeed contemplate retreat on July 2 but was persuaded otherwise by subordinates, and criticizes Meade for missed opportunities in the pursuit after the battle. Readers will find much to think about in this book.”
—James M. McPherson, Pulitzer Prize-winning author of Battle Cry of Freedom

“In this consistently riveting book, Allen Guelzo makes us feel that we are hearing the epic story of the Civil War's most famous battle for the first time. In unsentimental but always graceful prose, he delivers a panoramic yet astonishingly intimate account that interweaves the drama of battle with original—and often provocative—insights into the ways in which topography, weaponry, and the politics and personalities of its protagonists shaped events. This is, simply, the best book about Gettysburg that has yet been written. It is hard, if not impossible, to imagine that there will ever be a better one.”
—Fergus M. Bordewich, author of America’s Great Debate

“An extraordinary work of thorough scholarship combined with a lifetime of judgment about historic events. If you need a clear, direct introduction to the greatest battle on American soil this is a wonderful book. If you have read fifty books on Gettysburg but are looking for new insights and new facts that illuminate things you had never considered this is the book. Everyone interested in the decisive moment in Freedom's struggle should read Guelzo’s simply extraordinary book.”
—Newt Gingrich, former Speaker of the House and coauthor of Gettysburg: A Novel of the Civil War

“[A] rich, original work . . . [Guelzo’s] expansive, rolling storytelling . . . makes this book so engrossing and sets [it] apart from the many others.”
—Ernest Ferguson, The Washington Post

“This is the finest single-volume account available . . . there is a timeless quality to Gettysburg that makes it special.”
—Martin Walker, The Wilson Quarterly

“Few battles provoke debate like Gettysburg, whose bibliography exceeds 6,000 items. One more won’t settle the what-ifs, but Guelzo’s entry identifies key controversies, trenchantly advocates its interpretations, and rests on a sensible foundation, the confusion of a Civil War battle . . . [Gettysburg: The Last Invasion] reads like the battle might have been experienced . . . Guelzo demonstrates versatile historical skill in this superior treatment of Gettysburg.”
—Booklist, starred review

“Graceful . . . [Guelzo] gets up close and personal with soldiers and officers, providing a previously unseen level of intimacy with those who strategized and fought the battle . . . This exacting account of ‘the last invasion’ may well go down as the last word on the subject.”
—Publishers Weekly

“[Gettysburg] deserves to be included among the finest campaign studies of our generation. It earns this distinction with smart and vivid writing, innovative organization, and insightful analysis that manages to synthesize the Gettysburg story in a way that will appeal to the literate novice and the seasoned Civil War history reader alike.”
—The Civil War Monitor

“[A] stylish, comprehensive, and entertaining narrative . . . [Guelzo’s] account is not a typical tick-tock of troop movements; the pages are soaked in rich language and vivid character studies . . . Guelzo knows the power of the telling detail . . . At its core, Guelzo’s book explains some of the romanticism that hangs over the Civil War. Its soldiers appeal to us because they were ordinary people in extraordinary times; they fought with an appealing ‘amateurism of spirit and an innocence of intent,’ as Guelzo puts it. But tragically, those same qualities ensured a bloody outcome, no matter who emerged the victor.”
—MHQ: The Quarterly Journal of Military History

“Wonderfully readable . . . [Gettysburg] marries scholarly rigor to a sense of narrative that rivals that of a novel.”
—The Daily Beast

“Much ink has been spilled over the Battle of Gettysburg. Readers might think there is little left to say and no fresh way of saying it, but Guelzo . . . proves such skeptics wrong with his riveting account of both the events leading up to the battle and the battle itself . . . Guelzo has composed a narrative that is detailed and compelling on a human level but easy to follow on an operational and tactical one . . . A triumph of source use and presentation, engaging enough for the general reader but rigorous enough for the scholar.”
—Library Journal
Read More