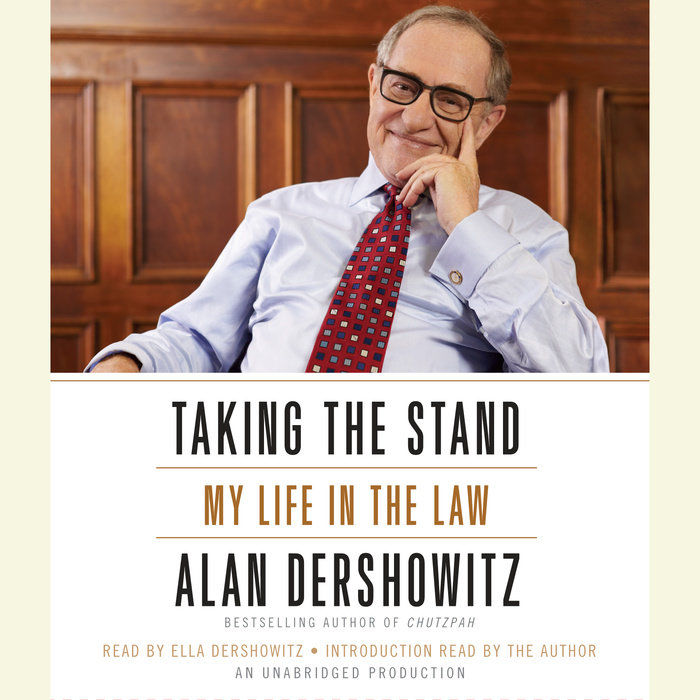 America's most prominent legal mind and the #1 bestselling author of Chutzpah and The Best Defense, Alan Dershowitz, recounts his legal autobiography, describing how he came to the law, as well as the cases that have changed American jurisprudence over the past 50 years, most of which he has personally been involved in.

In Taking the Stand, Dershowitz reveals the evolution of his own thinking on such fundamental issues as censorship and the First Amendment, Civil Rights, Abortion, homicide and the increasing role that science plays in a legal defense. Alan Dershowitz, the Felix Frankfurter Professor of Law at Harvard University, and the author of such acclaimed bestsellers as Chutzpah, The Best Defense, and Reversal of Fortune, for the first time recounts his legal biography, describing his struggles academically at Yeshiva High School growning up in Williamsburg, Brooklyn, his successes at Yale, clerking for Supreme Court Justice Arthur Goldberg, his appointment to full professor at the Harvard at age 28, the youngest in the school's history. Dershowitz went on to work on many of the most celebrated cases in the land, from appealing (successfully) Claus Von Bulow's conviction for the murder of his wife Sunny, to the O.J. Simpson trial, to defending Mike Tyson, Leona Helmsley, Patty Hearst, and countless others.  He is currently part of the legal team advising Julian Assange.
Read More
"The list of legal issues and controversies that bear Dershowitz’s thumbprints is breathtaking. That one man involved himself in the Pentagon Papers case, the Clinton-Lewinsky scandal, Kennedy’s Chappaquiddick investigation, Sharansky’s release from a Soviet prison, the O.J. trial, Bush v. Gore, the Mike Tyson rape case, the Woody Allen-Mia Farrow custody dispute, the Julian Assange WikiLeaks investigation and the public debate over Trayvon Martin, reflects not just the breadth of Dershowitz’s experience but also its depth and duration. Love him or hate him, Dershowitz has lived a life that matters, hugely and enduringly. He is a man in full at a time when most of us aspire to be little more than a presence on Twitter." -New York Times Book Review

"In 'Taking the Stand,' Dershowitz commands the stage. . . he fills his book to overflowing with fascinating and funny vignettes involving his cases and clients, and probing and provocative insights into contemporary legal controversies, ranging from censorship to civil rights, national security, sexual harassment, rape, abortion, the separation of church and state, and the use of scientific evidence in murder cases.  Whether he is discussing people or policies, he leaves no doubt about where he stands." -Glenn C. Altschuler, The Boston Globe

“The problem with writing about Harvard law professor Alan Dershowitz, of course, is Dershowitz himself. He is impossibly, almost self-consciously annoying. As he writes in his latest book, ‘Taking the Stand,’ he does ‘not hide behind the distorting shield of false humility.’… If Dershowitz isn’t getting in your face about something, it’s as if he’s not doing his job…

I love that Dershowitz credits the Classic Comics for his introduction to literature…In an amusing vignette, Woody Allen asks Dershowitz which dead person he might have represented. Dershowitz replies: “Jesus.”…The Mike Tyson material in “Stand” is fascinating, and the Bobby Fisher anecdote alone is worth the $28 cover price…

’I’m never satisfied unless I get the last word,’ he writes in ‘[Taking the] Stand.’ Then he provides the text of his letter to the editor, finding fault with the as-yet unpublished, indeed unwritten obituaries that he assumes will herald his passing…We all wish [Dershowitz] a long and healthy life…” –Alex Beam, Boston Globe

"One of the most high-profile lawyers in America, known for his work on newsworthy cases...raises provocative questions about the many dilemmas in modern American jurisprudence, including those related to the separation of church and state, affirmative action, human rights, and the right to privacy. Dershowitz offers much of interest...” -Publishers Weekly

“From beginning to end, this memoir is both entertaining and enlightening. We see a young and inquisitive Dershowitz continually arguing with the authority figures in his early life, never satisfied with the answer, ‘just because’…Dershowitz uses his experiences to relate some very important points: the necessity of civil rights, the proper application reasonably can to help a client.” –Library Journal

"One of the most distinguished lawyers of his generation reflects on his life and extraordinary career...The youngest full professor ever at Harvard Law School...more than four decades, he has used this perch to teach, write and speak about the law’s intersections with science and psychiatry and especially about matters pertaining to constitutional and criminal law. Most unusually for a law professor, Dershowitz has maintained a highly active appellate practice, and he narrates...his life in the law through the many cases he’s handled. Many of these unfailingly interesting tales feature high-profile clients like Leona Helmsley, O.J. Simpson, Mike Tyson and Bill Clinton...Dershowitz has become an important voice with an active role in the evolution of American law, touching on an astonishing breadth of issues, including capital punishment, affirmative action, pornography, national security, academic freedom and human rights. An engaging recounting of a life of serious purpose and splendid flair." -Kirkus Reviews (Starred Review)

“From his experience on the front lines of so many pivotal cases in recent history, Professor Dershowitz made the law real for his students. He effortlessly translated how our most basic philosophical principles are alive and well in the modern justice system. In doing so, he underscored not just a commitment to equity and integrity, but a deep faith in the power of the law to make our country more honest and fair.” – Congressman Joe Kennedy III

"I loved this book. If I could trade lives with anyone, Dershowitz would be high on my list, minus the death threats and tchotchkes." -Larry David

“Alan Dershowitz’s real life use of science to win murder cases rivals anything on CSI and any other fictional drama.  Cheers for a riveting autobiography.”  -Ted Danson

"Alan Dershowitz's autobiography is a page turning story of a special life. It exposes  and explains  as only he can important events of the last fifty years of The American Experience. Dershowitz has been a player contributing to the national conversation for half a century. Everybody takes his calls." –Stephen Trachtenberg, president, George Washington University
Read More