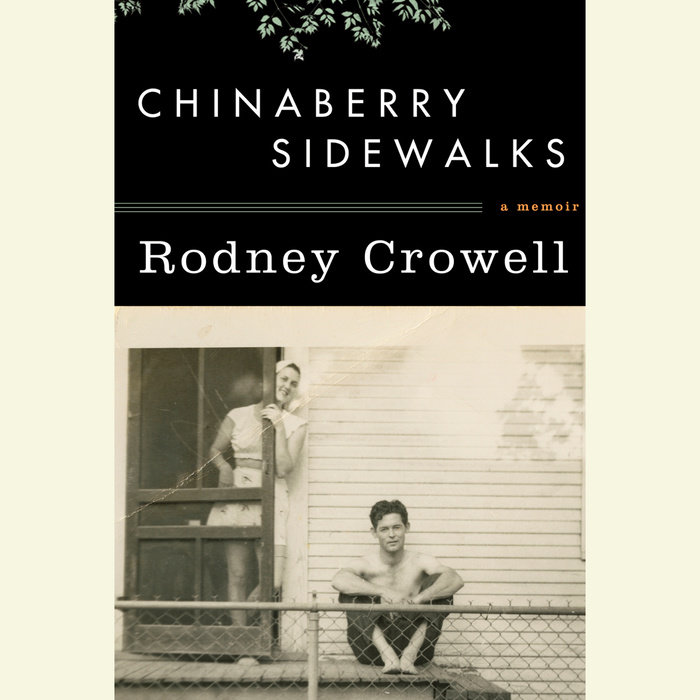 The only child of a hard-drinking father and a Holy Roller mother, Rodney Crowell was no stranger to bombast from an early age, whether knock-down-drag-outs at a local dive bar or fire-and-brimstone sermons at Pentecostal tent revivals. He was an expert at reading his father’s mercurial moods and gauging exactly when his mother was likely to erupt, and even before he learned to ride a bike, he was often forced to take matters into his own hands. He broke up his parents’ raucous New Year’s Eve party with gunfire and ended their slugfest at the local drive-in (actual restaurants weren’t on the Crowells’ menu) by smashing a glass pop bottle over his own head.

Despite the violent undercurrents always threatening to burst to the surface, he fiercely loved his epilepsy-racked mother, who scorned boring preachers and improvised wildly when the bills went unpaid. And he idolized his blustering father, a honky-tonk man who took his boy to see Hank Williams, Jerry Lee Lewis, Carl Perkins, and Johnny Cash perform live, and bought him a drum set so he could join his band at age eleven.

Shot through with raggedy friends and their neighborhood capers, hilariously awkward adolescent angst, and an indelible depiction of the bloodlines Crowell came from, Chinaberry Sidewalks also vividly re-creates Houston in the fifties: a rough frontier town where icehouses sold beer by the gallon on paydays; teeming with musical venues from standard roadhouses to the Magnolia Gardens, where name-brand stars brought glamour to a place starved for it; filling up with cheap subdivisions where blue-collar day laborers could finally afford a house of their own; a place where apocalyptic hurricanes and pest infestations were nearly routine.

But at its heart this is Crowell’s tribute to his parents and an exploration of their troubled yet ultimately redeeming romance. Wry, clear-eyed, and generous, it is, like the very best memoirs, firmly rooted in time and place and station, never dismissive, and truly fulfilling.
Read More

“Personal and profound, an epic remembrance of his parents’ honky-tonk romance, delivered with the same hallmarks of Crowell's best songwriting: expert pacing, gritty detail, and humor by the bottle.” —Austin Powell, The Austin Chronicle

“Thoroughly readable, unblinkingly frank, laugh-out-loud funny and as profane as any Ship Channel longshoreman, it's a literary triumph that will rank along with Mary Karr’s The Liar's Club as one of the finest pieces of Gulf Coast nonfiction.” —William Michael Smith, Houston Press

“[Crowell’s] childhood memories of Jacinto City outside of Houston vary from uproarious to heartwarming, all told with a sharp wit and a Lone Star flair [and] brought to life in a manner that's simple, eloquent, and endlessly entertaining.”  —Jim Caligiuri, The Austin Chronicle

“A loving, affectionate tribute…Crowell's parents remain his heroes not in spite of their flaws, but because of them, and because of their son's proud refusal to sugarcoat the truth.  Instead, this honest, forgiving, and self-assured memoir brings all the skeletons out of the closet and invites them to dance.” —Gina Webb, The Atlanta Journal-Constitution

“Humid, heavily atmospheric and often raucous…both horrific and hilarious [with] some of the most tender passages I have ever read.” —Chet Flippo, CMT

“Rodney Crowell’s memoir of his boyhood in southeast Texas is a wonder: wistful and profane, heartbreaking and hilarious, loving and angry, proud and self-lacerating. Best known as a composer and performer of country and folk music, he emerges here as a prose stylist of energy and distinctiveness, a gifted storyteller who has, as it happens, an uncommonly interesting and deeply American story to tell….It’s a measure of the subtlety that Crowell brings to his portrait of his parents that he simultaneously is appalled by them and deeply loves them….Love, in the end, is what Chinaberry Sidewalks is really about [but] there is much more to it, much of it uproarious or moving in different ways: boisterous small-town boys making mischief, Tom Sawyers and Huck Finns with cuss words added; seeing and hearing Hank Williams two weeks before his death; a spectacular show by Jerry Lee Lewis, followed immediately by an unforgettable one by Johnny Cash, who ‘spoke the language of common people with uncommon eloquence.’ That, of course, is exactly what Rodney Crowell has done in this splendid book.” —Jonathan Yardley, The Washington Post

“This tribute to enduring love [is] rip-snorting...eloquent, movingly spiritual….[Crowell’s] hyperbole segues beautifully into the high-intensity details and events with which the book is studded, and the enthusiasm with which they are described.” —Janet Maslin, The New York Times

“Crowell’s upbringing in Texas had all the prerequisite elements of a hardscrabble country music story…but [his] storytelling abilities and narrative flair elevate this book far above the average music memoir.” —Publishers Weekly, starred review

“With this heartfelt memoir [Crowell] can now be called a writer of the first order…Unsparingly honest…Exceptional.” —Booklist, starred review

“This is a wonderful memoir. Full of humor, honesty and true humility, and so well written I had to immediately re-read it to see if it was as good as I thought it was. It is. It is stunningly good. Maybe the best I ever read.” —Kris Kristofferson

“That Rodney Crowell survived his childhood—the poverty, the beatings, the hurricanes, the loaded .22 in the bedroom closet—is a miracle. That he can recall it with such gentle humor, that he can evoke his volatile mother and father with so much love and forgiveness, makes his memoir a powerful lesson in grace.” —J.R. Moehringer

“Some people can just flat write, and other people have a great story to tell, and every now and then it’s the same lucky fool.  Rodney Crowell proves one fried chicken gizzard, one Jax beer, and one awful heartache at a time that you can live with a crazy mama and a damaged daddy and love them both.” —Rick Bragg

“Long known as a poet among songwriters, Rodney Crowell brings his considerable lyric gifts and his innate Texas storytelling talent to the page. This childhood  is not one you'd  sign up for—hardscrabble, alcohol-sodden, violent enough to jar your eye teeth. Yet Crowell's love for his family finds humor and redemption in every riveting scene. By turns wild and tender, it kept me up all night in a straight-through read.” —Mary Karr