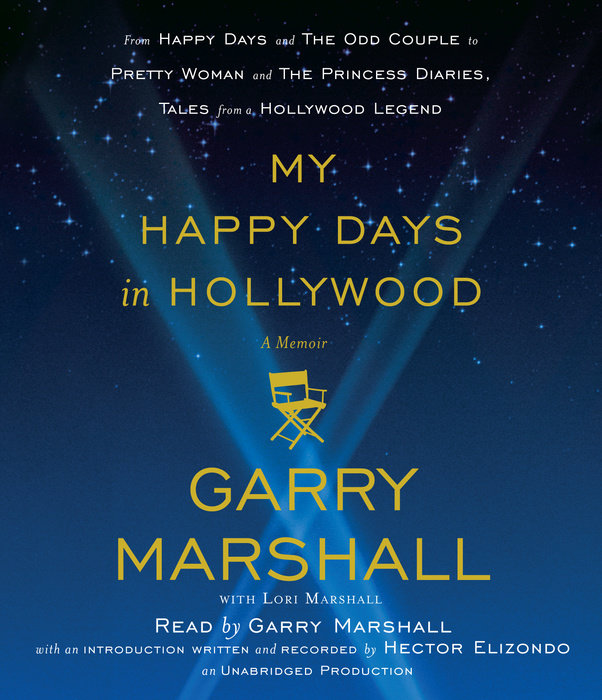 Written by: Garry Marshall
Read by: Garry Marshall
11 Hours and 7 Minutes Imprint: Random House Audio Genre: Biography & Autobiography - Entertainment & Performing Arts Release Date: April 24, 2012
With the television hits The Odd Couple, Happy Days, Laverne & Shirley, and Mork & Mindy, and movies like The Flamingo Kid, Beaches, Pretty Woman, and The Princess Diaries under his belt, Garry Marshall was among the most successful writers, directors, and producers in America for more than five decades. His work on the small and big screen delighted audiences for decades and has withstood the test of time.

In My Happy Days in Hollywood, Marshall takes us on a journey from his stickball-playing days in the Bronx to his time at the helm of some of the most popular television series and movies of all time, sharing the joys and challenges of working with the Fonz and the young Julia Roberts, the “street performer” Robin Williams, and the young Anne Hathaway, among many others. This honest, vibrant, and often hilarious memoir reveals a man whose career was defined by his drive to make people laugh and whose personal philosophy—despite his tremendous achievements—was always that life is more important than show business.
Read More
“Garry Marshall is walking entertainment. He is smart, insightful, funny…and so is his book.” ―Henry Winkler

"Even though he speaks slowly with a distinctive New Yorkese Bronx accent, he has managed to quickly create, write, and produce a raft of beloved television series that speak 'American'. I am happy that he gifted us with a witty memoir (about his Happy Days in Hollywood).” ―Carl Reiner

“Thanks to my brother I have a life.  I’m sorry I almost ruined his during Laverne & Shirley.” ―Penny Marshall

"I never thought my fairy godmother would look―or sound―like Garry. He is a gift of a human being, and this book is wicked sweet." ―Anne Hathaway

“Garry Marshall is one of the most beloved and talented people I know…and maybe the most normal guy in the business. This wonderful biography will allow readers to discover for themselves the decent and kind man who writes and directs with such a huge heart—all grounded from humble beginnings in The Bronx. This is a must-read book.” —Julie Andrews

“Garry Marshall is quite simply one of my favorite people. He is loving, loyal, and hilarious! Having made movies with Garry when I was 20, 30, and 40…I guess you could say Garry and Barbara have raised me! In a time where people have lost touch with things to laugh about, this book is sure to be a cure.” —Julia Roberts
Read More