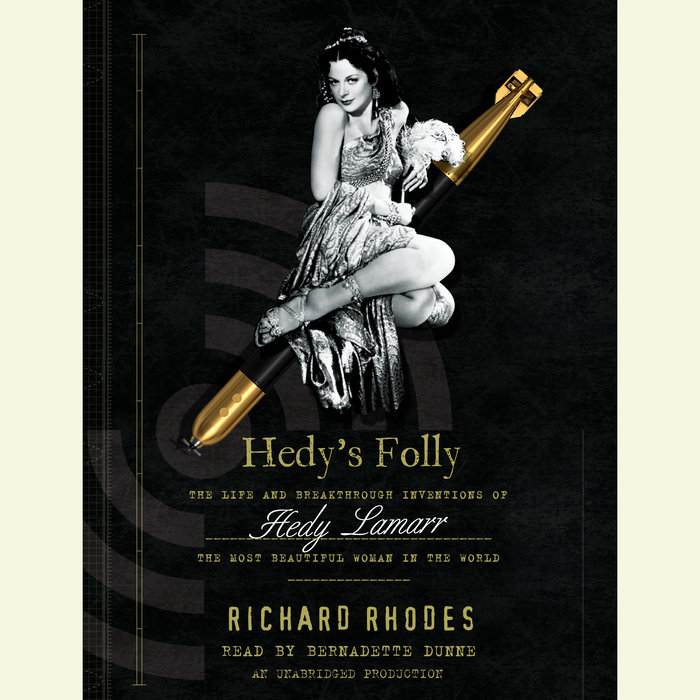 What do Hedy Lamarr, avant-garde composer George Antheil, and your cell phone have in common? The answer is spread-spectrum radio: a revolutionary inven­tion based on the rapid switching of communications sig­nals among a spread of different frequencies. Without this technology, we would not have the digital comforts that we take for granted today.

Only a writer of Richard Rhodes’s caliber could do justice to this remarkable story. Unhappily married to a Nazi arms dealer, Lamarr fled to America at the start of World War II; she brought with her not only her theatrical talent but also a gift for technical innovation. An introduction to Antheil at a Hollywood dinner table culminated in a U.S. patent for a jam- proof radio guidance system for torpedoes—the unlikely duo’s gift to the U.S. war effort.

What other book brings together 1920s Paris, player pianos, Nazi weaponry, and digital wireless into one satisfying whole? In its juxtaposition of Hollywood glamour with the reality of a brutal war, Hedy’s Folly is a riveting book about unlikely amateur inventors collaborating to change the world.
Read More
Hedy's Folly is one of the Huffington Post's Best Film Books of 2011!


“Rhodes’s talent is making the scientifically complex accessible to the proverbial lay reader with clarity and without dumbing down the essentials of his topics…along the way he expertly weaves social and cultural commentary into his narrative…. Behind the uniqueness of this story lie deeper themes that Rhodes touches upon: the gender biases against beautiful and intelligent women, the delicate interpersonal politics of scientific collaboration and…the neverending, implacable conflict between art and Mammon in American culture.”—John Adams, front page of the New York Times Book Review


"This is a smart, strange and fascinating book, which deserves to find an audience.... Rhodes is particularly good when describing intellectual milieus, whether Vienna in the first years of the 20th century, the Paris of James Joyce, Ezra Pound and Sylvia Beach and — for that matter — the permanent bureaucracy of the Pentagon. Many will have forgotten the brutal Soviet attack on Finland in 1940, but Rhodes sums it up poignantly and succinctly in three pages about the death of Antheil’s brother Henry. Finally, Rhodes is one of those few writers capable of explaining complicated scientific ideas to the general public, invariably with clarity and precision and sometimes wit and poetry as well."—Prof. Tim Page, Washington Post


"Hedy Lamarr, Hollywood starlet and inventor of a torpedo guidance system during World War II? Who knew? Richard Rhodes, the Pulitzer-winning author of The Making of the Atomic Bomb, drops quite a bombshell with this revelation in his new book."—Weekend Picks, USA Today


"Richard Rhodes...unites the social history of Vienna, the classic era of Hollywood film, Paris in the ’20s, experimental music, weapons design, the niceties of patent law and the technology of information transmission — a real grab bag of elements — in this short, charming and remarkably seamless book. He makes a rigorous effort to establish exactly what Lamarr contributed.... 'She deserved better,' Rhodes writes, than to be judged by that spectacular face alone, and now, at last, she is."—Laura Miller, Salon


"Actresses often long to turn director, but how many of them yearn to turn inventor? Given the success that the screen siren Hedy Lamarr achieved in that realm—revealed in Richard Rhodes’s fascinating biography, Hedy’s Folly—it’s a pity more of them don’t consider it.... Rhodes’s beguiling book shows Hedy Lamarr to have been a secret weapon in more ways than one."—Liesl Schillinger, Newsweek


"...[M]ost people were reluctant to believe that the most beautiful woman in the word had an invetor's brain; but one man who came to believe in her was George Antheil.... Richard Rhodes...is the perfect historian to describe the abilities of Hedy Lamarr and George Antheil as scientists and inventors.  In Hedy's Folly, Rhodes is also very good on culture-rich Vienna...[and] the Hollywood of the '30s and '40s."—Larry McMurtry, Harper's Magazine


"With admirable and tenacious skill, Richard Rhodes' new book on Hollywood screen legend Hedy Lamarr unveils the inquisitive brain behind the beauty.... [It] reads at turns like a romance novel, patent law primer, noir narrative and exercise in forensic psychology.... Rhodes...ends up shedding valuable insight on the Hollywood mythmaking of the era."—Adam Tschorn, Los Angeles Times


"Hedy Lamarr, glamorous Hollywood star. Hedy Lamarr, glamorous genius inventor.
That's the gist of Richard Rhodes' Hedy's Folly: The Life and Breakthrough Inventions of Hedy Lamarr, although, of course, it's far more complicated than that. And far more fascinating.... The Pulitzer Prize-winning Rhodes (for the first volume in his history of nuclear science and weaponry) goes at all this with diligence and curiosity."—Steven Rea, Philadelphia Inquirer


"Richard Rhodes’s book should be celebrated: he shows that even in the “information” age, there is a way to write about an American movie star that gives readers something new...even the best-known details of the star’s life seem fresh."—Rachel Shtier, The New Republic


"Literary luminary Rhodes is not the first to write about movie star Hedy Lamarr’s second life as an inventor, but his enlightening and exciting chronicle is unique in its illumination of why and how she conceived of an epoch-shaping technology now known as frequency hopping spread spectrum. As intelligent and independent as she was beautiful, Jewish Austrian Lamarr quit school to become an actor, then disastrously married a munitions manufacturer who got cozy with the Nazis. Lamarr coolly gathered
weapons information, then fled the country for Hollywood. As she triumphed on the silver screen, she also worked diligently on a secret form of radio communication that she hoped would boost the U.S. war effort, but which ultimately became the basis for cell phones, Wi-Fi, GPS, and bar-code readers. Lamarr’s technical partner was George Antheil, a brilliant and intrepid pianist and avant-garde composer whose adventures are so fascinating, he nearly steals the show. In symphonic control of a great wealth of fresh and stimulating material, and profoundly attuned to the complex ramifications of Lamarr’s and Antheil’s struggles and achievements (Lamarr finally received recognition as an electronic pioneer late in life), Rhodes incisively, wittily, and dramatically brings to light a singular convergence of two beyond-category artists who overtly and covertly changed the world."—Donna Seaman, Booklist (starred)


"Rhodes manages to shed light on the strange partnership that led a screen siren and an eclectic composer to produce what was later recognized as a groundbreaking technology.... Hedy’s Folly is a reminder that neither time nor gravity can diminish the allure of a beautiful mind."—Bloomberg Business Week


"If the subtitle of this book—The Life and Breakthrough Inventions of Hedy Lamarr, the Most Beautiful Woman in the World—doesn’t make you want to read, nothing we say is likely to change your mind. But we will add this much: Rhodes, who has written about everything from atomic power to sex to John James Audubon, is apparently incapable of writing a bad book and most of what he does is absolutely superior, including this tale that has Nazi weapons, Hollywood stars, 20th century classical music, and the earliest versions of digital wireless."—The Daily Beast


"[Rhodes] once again interweaves moving biographical portraits with dramatic depictions of scientific discovery.... [He] proves adept at elucidating the science behind this invention and the subsequent development of spread-spectrum systems (which today enable the use of cell phones and Wi-Fi), but his particular genius lies in placing the invention within a tumultuous historical moment.... With crisp, unadorned prose and plentiful quotes from primary sources, [he] paints a compelling history.... [Hedy's Folly] proves a riveting narrative, propelled by the ambition and idiosyncrasies of the inventors at its core."—Nick Bascom, Science News


"The author of The Twilight of the Bomb (2010) returns with the surprising story of a pivotal invention produced during World War II by a pair of most unlikely inventors—an avant-garde composer and the world’s most glamorous movie star....A faded blossom of a story, artfully restored to bright bloom."—Kirkus Reviews


"Here's a recipe that might surprise you: take a silver-screen sex goddess (Hedy Lamarr), an avant-garde composer (George Antheil), a Hollywood friendship, and mutual technological curiosity, and mix well. What results is a patent for spread-spectrum radio, which has impacted the development of everything from torpedoes to cell phones and GPS technologies. This surprising and long-forgotten story is brought to life by Pulitzer Prize winner Rhodes (The Making of the Atomic Bomb), who deftly moves between Nazi secrets, scandalous films, engineering breakthroughs, and musical flops to weave a taut story that straddles two very different worlds—the entertainment industry and wartime weaponry—and yet somehow manages to remain a delectable read.   Hedy Lamarr is experiencing something of a renaissance, and Rhodes's book adds another layer to the life of a beautiful woman who was so much more than the sum of her parts. It will appeal to a wide array of readers, from film, technology, and patent scholars to those looking for an unusual romp through World War II–era Hollywood."—Teri Shiel, Library Journal


"A focused glimpse into one actress’ remarkable life, and the rare mix of war, patriotism and intellect that fomented her unlikely invention."—Alexandria Witze, Dallas Morning News


"Rhodes...manages to capture the sheer improbability of these unlikely Edisons."—Entertainment Weekly


"Richard Rhodes’s 21st book is a bit of a departure for the author (who is best known for his four-volume history of the nuclear age): It’s an account of film siren Hedy Lamarr’s unlikely involvement in the American war effort. What it has in common with Rhodes’s other works is that it, too, is riveting.... There’s enough technical and military history here to keep Rhodes’s hard-core fan base satisfied. But the cultural history is just as interesting, and Rhodes tells both stories with a sure and supple hand."—The Observer's Very Short List


"In Hedy Lamarr, [Rhodes] seems to have found a subject dear to his heart.... Hedy's Folly delights in two ways.... Rhodes weaves a gossipy international, cross-cultural romp worthy of Hedda Hopper. Second, [he] shows how Lamarr's knowledge of armaments and Antheil's experience with synchronizing player pianos and other mechanic musical instruments led them to a patent for a way to make radio-guided torpedoes jam-proof."—Chet Raymo, Globe and Mail

The Making of the Nuclear Age (four volumes)

“Every age finds the writers it needs, and the nuclear age has found Richard Rhodes.”—Jonathan Schell, The Nation

“Rhodes deserves considerable praise for his four books. He writes with remarkable confidence and clarity about these terrible devices. He tells stories well. He loads his text with interesting facts. His technical command is impressive.”—Nicholas Thompson, New York Times Book Review

“No one writes better about nuclear history than Rhodes does, ably combining a scholar’s attention to detail with a novelist’s devotion to character and pacing . . . The ingenuity and progressive spirit he reveals inspire optimism.”—George Perkovich, The Washington Post

“This long, rich book [The Making of the Atomic Bomb]. . . is the comprehensive history of the bomb, and it is also a work of literature.”—Tracy Kidder, John James Audubon: The Making of an American

“Rhodes has managed to do for Audubon what Audubon did for birds. . . in this splendid biography Rhodes has produced nothing less than a portrait of the United States in its formative years.”—Jonathan Rosen, New York Times Book Review

“More than a mere biography: it is a comprehensive history of a man and his era. . . . Rhodes breathes life again into the world in which Audubon lived.”— Avedis Hadjian, Los Angeles Times Book Review


Masters of Death: The SS Einsatzgruppen and the Invention of the Holocaust

“This is an important and enormously powerful book.” —Elie Wiesel