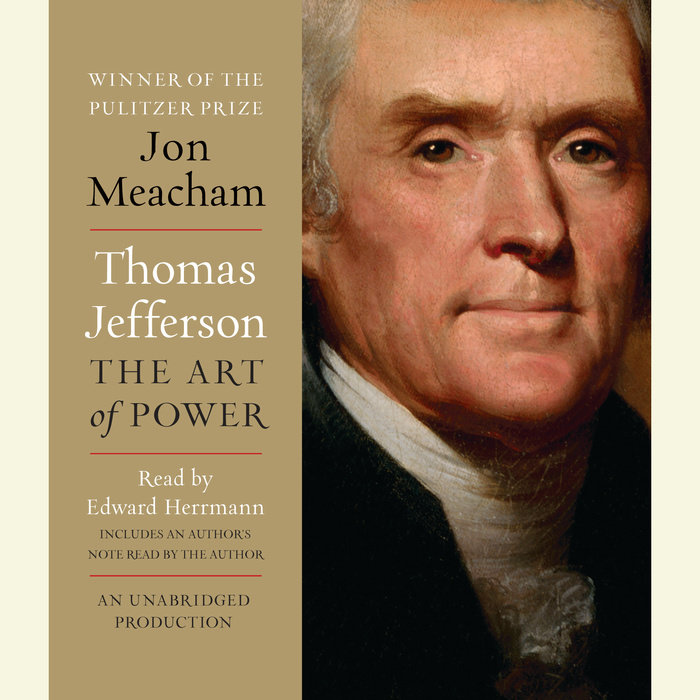 NAMED ONE OF THE BEST BOOKS OF THE YEAR BY
The New York Times Book Review • The Washington Post • Entertainment Weekly • The Seattle Times • St. Louis Post-Dispatch • Bloomberg Businessweek

In this magnificent biography, the Pulitzer Prize–winning author of American Lion and Franklin and Winston brings vividly to life an extraordinary man and his remarkable times. Thomas Jefferson: The Art of Power gives us Jefferson the politician and president, a great and complex human being forever engaged in the wars of his era. Philosophers think; politicians maneuver. Jefferson’s genius was that he was both and could do both, often simultaneously. Such is the art of power.

Thomas Jefferson hated confrontation, and yet his understanding of power and of human nature enabled him to move men and to marshal ideas, to learn from his mistakes, and to prevail. Passionate about many things—women, his family, books, science, architecture, gardens, friends, Monticello, and Paris—Jefferson loved America most, and he strove over and over again, despite fierce opposition, to realize his vision: the creation, survival, and success of popular government in America. Jon Meacham lets us see Jefferson’s world as Jefferson himself saw it, and to appreciate how Jefferson found the means to endure and win in the face of rife partisan division, economic uncertainty, and external threat. Drawing on archives in the United States, England, and France, as well as unpublished Jefferson presidential papers, Meacham presents Jefferson as the most successful political leader of the early republic, and perhaps in all of American history.

The father of the ideal of individual liberty, of the Louisiana Purchase, of the Lewis and Clark expedition, and of the settling of the West, Jefferson recognized that the genius of humanity—and the genius of the new nation—lay in the possibility of progress, of discovering the undiscovered and seeking the unknown. From the writing of the Declaration of Independence to elegant dinners in Paris and in the President’s House; from political maneuverings in the boardinghouses and legislative halls of Philadelphia and New York to the infant capital on the Potomac; from his complicated life at Monticello, his breathtaking house and plantation in Virginia, to the creation of the University of Virginia, Jefferson was central to the age. Here too is the personal Jefferson, a man of appetite, sensuality, and passion.

The Jefferson story resonates today not least because he led his nation through ferocious partisanship and cultural warfare amid economic change and external threats, and also because he embodies an eternal drama, the struggle of the leadership of a nation to achieve greatness in a difficult and confounding world.

Praise for Thomas Jefferson: The Art of Power

“This is probably the best single-volume biography of Jefferson ever written.”—Gordon S. Wood

“A big, grand, absorbing exploration of not just Jefferson and his role in history but also Jefferson the man, humanized as never before.”—Entertainment Weekly

“[Meacham] captures who Jefferson was, not just as a statesman but as a man. . . . By the end of the book . . . the reader is likely to feel as if he is losing a dear friend. . . . [An] absorbing tale.”—The Christian Science Monitor

“This terrific book allows us to see the political genius of Thomas Jefferson better than we have ever seen it before. In these endlessly fascinating pages, Jefferson emerges with such vitality that it seems as if he might still be alive today.”—Doris Kearns Goodwin
Read More
“Fascinating and insightful … Many books have been written about Jefferson’s life, but few have created such a vivid portrait … Meacham immerses the reader in that period of history to explain Jefferson’s behavior during an era when the nation was as contradictory as he was … extraordinary … essential.”—The Associated Press

“[A]ccomplishes something more impressive than dissecting Jefferson’s political skills by explaining his greatness, a different task from chronicling a life, though he does that too — and handsomely. Even though I know quite a lot about Jefferson, I was repeatedly surprised by the fresh information Meacham brings to his work. Surely there is not a significant detail out there, in any pertinent archive, that he has missed.”—Joyce Appleby, Washington Post

“[Meacham] argues persuasively that for Jefferson the ideal of liberty was not incompatible with a strong federal government, and also that Jefferson’s service in the Congress in 1776 left him thoroughly versed in the ways and means of politics … Meacham wisely has chosen to look at Jefferson through a political lens, assessing how he balanced his ideals with pragmatism while also bending others to his will. And just as he scolded Jackson, another slaveholder and champion of individual liberty, for being a hypocrite, so Meacham gives a tough-minded account of Jefferson’s slippery recalibrations on race … Where other historians have found hypocrisy in Jefferson’s use of executive power to complete the Louisiana Purchase, Meacham is nuanced and persuasive..”—Jill Abramson, The New York Times Book Review

“[Meacham] does an excellent job getting inside Jefferson's head and his world … Meacham presents Jefferson's life in a textured narrative that weaves together Jefferson's well-traveled career.”—USA Today

“A big, grand, absorbing exploration of not just Jefferson and his role in history but also Jefferson the man, humanized as never before. [Grade:] A-.”—Entertainment Weekly

“Impeccably researched and footnoted … a model of clarity and explanation.”—Bloomberg

“[Meacham] captures who Jefferson was, not just as a statesman but as a man … By the end of the book, as the 83-year-old Founding Father struggles to survive until the Fourth of July, 1826, the 50th anniversary of his masterful Declaration, the reader is likely to feel as if he is losing a dear friend … [an] absorbing tale.”—Christian Science Monitor

“Absorbing . . . Jefferson emerges in the book not merely as a lofty thinker but as the ultimate political operator, a master pragmatist who got things done in times nearly as fractious as our own.”—Chicago Tribune

“[Jefferson’s] life is a riveting story of our nation’s founding—an improbable turn of events that seems only in retrospect inevitable. Few are better suited to the telling than Jon Meacham. . . . Captivating.”—The Seattle Times

“[Meacham] brings to bear his focused and sensitive scholarship, rich prose style … The Jefferson that emerges from these astute, dramatic pages is a figure worthy of continued study and appreciation … [a] very impressive book.”—Booklist (Starred Review)

“An outstanding biography that reveals an overlooked steeliness at Jefferson’s core that accounts for so much of his political success.”—Kirkus Reviews

“Jon Meacham understands Thomas Jefferson. With thorough and up-to-date research, elegant writing, deep insight, and an open mind, he brings Jefferson, the most talented politician of his generation—and one of the most talented in our nation’s history—into full view. It is no small task to capture so capacious a life in one volume. Meacham has succeeded, giving us a rich presentation of our third president’s life and times. This is an extraordinary work.”—Annette Gordon-Reed, author of The Hemingses of Monticello

“This terrific book allows us to see the political genius of Thomas Jefferson better than we have ever seen it before. In these endlessly fascinating pages, Jefferson emerges with such vitality that it seems as if he might still be alive today.”—Doris Kearns Goodwin, author of Team of Rivals

“Jon Meacham resolves the bundle of contradictions that was Thomas Jefferson by probing his love of progress and thirst for power. Here was a man endlessly, artfully intent on making the world something it had not been before. A thrilling and affecting portrait of our first philosopher-politician.”—Stacy Schiff, author of Cleopatra: A Life

"A true triumph. In addition to being a brilliant biography, this book is a guide to the use of power. Jon Meacham shows how Jefferson's deft ability to compromise and improvise made him a transformational leader. We think of Jefferson as the embodiment of noble ideals, as he was, but Meacham shows that he was a practical politician more than a moral theorist. The result is a fascinating look at how Jefferson wielded his driving desire for power and control."—Walter Isaacson, author of Steve Jobs

"This is probably the best single-volume biography of Jefferson ever written; it is certainly the most readable."—Gordon Wood, author of The Radicalism of the American Revolution

“This is Jon Meacham's best book yet. Evocatively written and deeply researched, it sheds brilliant light on facets of Thomas Jefferson we haven't seen before, gives us original and unexpected new insights into his identity and character, and uses the irresistible story of this talented, manipulative, complicated man to bring us life lessons on universal subjects from family and friendship to politics and leadership. The Sage of Monticello made a considerable effort to turn his life into a mystery, but in a splendid match of biographer with subject, Meacham has cracked the Jefferson code."—Michael Beschloss
Read More