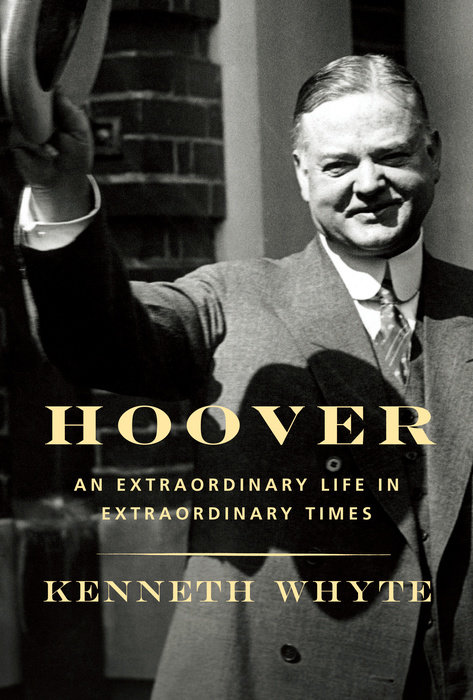 "An exemplary biography—exhaustively researched, fair-minded and easy to read. It can nestle on the same shelf as David McCullough’s Truman, a high compliment indeed." —The Wall Street Journal

The definitive biography of Herbert Hoover, one of the most remarkable Americans of the twentieth century—a wholly original account that will forever change the way Americans understand the man, his presidency, his battle against the Great Depression, and their own history.

An impoverished orphan who built a fortune. A great humanitarian. A president elected in a landslide and then resoundingly defeated four years later. Arguably the father of both New Deal liberalism and modern conservatism, Herbert Hoover lived one of the most extraordinary American lives of the twentieth century. Yet however astonishing, his accomplishments are often eclipsed by the perception that Hoover was inept and heartless in the face of the Great Depression.

Now, Kenneth Whyte vividly recreates Hoover’s rich and dramatic life in all its complex glory. He follows Hoover through his Iowa boyhood, his cutthroat business career, his brilliant rescue of millions of lives during World War I and the 1927 Mississippi floods, his misconstrued presidency, his defeat at the hands of a ruthless Franklin Roosevelt, his devastating years in the political wilderness, his return to grace as Truman's emissary to help European refugees after World War II, and his final vindication in the days of Kennedy's "New Frontier." Ultimately, Whyte brings to light Hoover’s complexities and contradictions—his modesty and ambition, his ruthlessness and extreme generosity—as well as his profound political legacy.

Hoover: An Extraordinary Life in Extraordinary Times is the epic, poignant story of the deprived boy who, through force of will, made himself the most accomplished figure in the land, and who experienced a range of achievements and failures unmatched by any American of his, or perhaps any, era. Here, for the first time, is the definitive biography that fully captures the colossal scale of Hoover’s momentous life and volatile times.
Read More
“An exemplary biography—exhaustively researched, fair-minded and easy to read. It can nestle on the same shelf as David McCullough’s Truman, a high compliment indeed.”—Edward Kosner, The Wall Street Journal

“Outstanding…. Whyte makes a convincing case for the reassessment of our 31st president…. This well organized, thoroughly researched, and smoothly written biography persuasively demonstrates that its subject’s place in history should be elevated far beyond its current status.” —Talmage Boston, Washington Independent Review of Books

“Whyte’s account is the most full-fleshed and three-dimensional Hoover readers have yet encountered” —Steve Donoghue, The Christian Science Monitor

“Whyte details how Hoover was up against worldwide economic forces that he had no way of controlling and points out that the hard times continued long into Roosevelt’s presidency. Just as interesting, however, are Whyte’s accounts of Hoover’s early life, from his rise from orphanhood to world-traveling problem solver, and his post-presidency attempt to restore his image and regain his place among the 20th century’s most admired people.” —Keith Herrell, BookPage

"Summons us to see Hoover as a human personality, more than just a walking embodiment of Great Depression studies.... In the unceasing ideological quarrying of the American past, this great man and execrated president has proven himself useful again. To understand Hoover’s life, career, and his legacy in full, this rich new biography will certainly prove indispensable.” —David Frum, The Atlantic

"Monumental.... Important, and irresistibly interesting.... Whyte serves as a learned but inviting tour guide to this extraordinary life, bringing a fresh eye and fresh perspective.... [He] shows us a man of impatience, insensitivity and impolitic behaviour, though balanced with great confidence and competence.... Over all, the Hoover story—and the Whyte book—is a distinctly American tale: persistence, ambition, grand plans (all covered with a shellac wash of overweening pride and overwhelming arrogance), played out over five continents and marked by three economic crises. The result is an astonishing alchemy of soaring achievement and deep disappointment." —David Shribman, Toronto Globe and Mail

"Hoover was doomed to be remembered as the man who was too rigidly conservative to react adeptly to the Depression, as the hapless foil to the great Franklin Roosevelt, and as the politician who managed to turn a Republican country into a Democratic one…. Hoover...helpfully lays out a long and copious résumé that doesn’t fit on this stamp of dismissal." —Nicholas Lemann, The New Yorker

“[A] comprehensive and accessible study…. Whyte’s work contextualizes Hoover as a man of his times…. In seeking to understand rather than judge Hoover throughout the entire trajectory of his life, Whyte succeeds in creating a positive overview of the leader’s long prepresidential service.” —Frederick J. Augustyn Jr., Library Journal

“A well-executed reexamination of the character and career of a gifted, unjustly maligned leader.… In this comprehensive and generally sympathetic biography, Whyte reminds us that both before and after his single term as president, Hoover compiled a record of extraordinary achievement…. Whyte stresses Hoover’s remarkable drive and even ruthlessness, qualities he brought to public service during WWI when he organized crucial food-relief efforts throughout Europe.” —Jay Freeman, Booklist

“A great biography…. Hoover lived a life of adventure and accomplishment, and Whyte captures that spirit in engaging, readable prose…. Whyte doesn’t gloss over Hoover’s flaws, nor his failed efforts to right the economy during the Depression. But he makes it clear that Hoover’s presidency is not the only—or best—measure of his service to his country and world.”  —Rob Cline, The Gazette (IA)

"A thoughtful resurrection of a brilliant man who, aside from the Founding Fathers, did more good before taking office than any other president in American history." —Kirkus (starred review)

"A clear-eyed, sympathetic portrayal of the American president best remembered for his inability to pull the U.S. out of the Great Depression.... [He] doesn’t shy away from [the] seedier aspects of Hoover’s life, but nor is he judgmental.... With adept explanations of the Depression's complexities and a refreshing sense of objectivity regarding Hoover's approach to combatting it, Whyte portrays a figure to be neither pitied nor reviled, but better understood." —Publishers Weekly

"Often ranked as one of our worst presidents—his very name evokes Depression-era shantytowns—Hoover gets a reconsideration here that sweeps over his entire career… [Whyte] charts Hoover's rise from childhood poverty to business mega-success, then reminds us of Hoover’s large-scale humanitarian works during World War I and after the 1927 Mississippi floods and his efforts (however thankless) to combat the Great Depression. And he was tasked by President Harry Truman himself with aiding European refugees after World War II, which not everyone knows. Get reading." —Barbara Hoffert, Library Journal, "Barbara’s Picks"
Read More