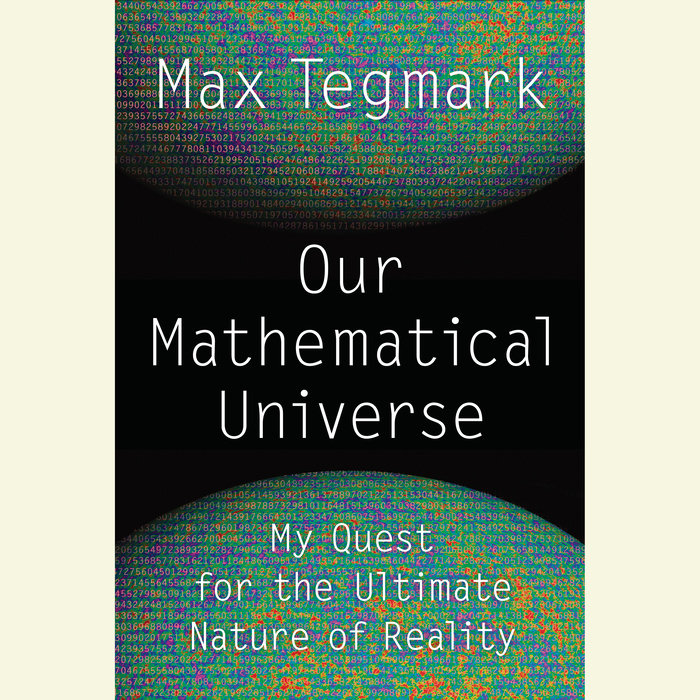 Written by: Max Tegmark
Read by: Rob Shapiro
15 Hours and 23 Minutes Imprint: Random House Audio Genre: Science - Space Science - Cosmology Release Date: January 07, 2014
Max Tegmark leads us on an astonishing journey through past, present and future, and through the physics, astronomy and mathematics that are the foundation of his work, most particularly his hypothesis that our physical reality is a mathematical structure and his theory of the ultimate multiverse. In a dazzling combination of both popular and groundbreaking science, he not only helps us grasp his often mind-boggling theories, but he also shares with us some of the often surprising triumphs and disappointments that have shaped his life as a scientist. Fascinating from first to last—this is a book that has already prompted the attention and admiration of some of the most prominent scientists and mathematicians.
Read More
Brian Greene, physicist, author of The Elegant Universe and The Hidden Reality
“Our Mathematical Universe boldly confronts one of the deepest questions at the fertile interface of physics and philosophy: why is mathematics so spectacularly successful at describing the cosmos? Through lively writing and wonderfully accessible explanations, Max Tegmark—one of the world’s leading theoretical physicists—guides the reader to a possible answer, and reveals how, if it’s right, our understanding of reality itself would be radically altered.”

Michio Kaku, author of Physics of the Future
“Daring, Radical. Innovative. A game changer. If Dr. Tegmark is correct, this represents a paradigm shift in the relationship between physics and mathematics, forcing us to rewrite our textbooks. A must read for anyone deeply concerned about our universe.”

Ray Kurzweil, author of The Singularity is Near
“Tegmark offers a fresh and fascinating perspective on the fabric of physical reality and life itself. He helps us see ourselves in a cosmic context that highlights the grand opportunities for the future of life in our universe.”

Prof. Edward Witten, physicist, Fields Medalist & Milner Laureate
“Readers of varied backgrounds will enjoy this book. Almost anyone will find something to learn here, much to ponder, and perhaps something to disagree with.”

Prof. Andrei Linde, physicist, Gruber & Milner Laureate for development of inflationary cosmology
“This inspirational book written by a true expert presents an explosive mixture of physics, mathematics and philosophy which may alter your views on reality.”

Prof. Mario Livio, astrophysicist, author of Brilliant Blunders and Is God a Mathematician?
“Galileo famously said that the universe is written in the language of mathematics. Now Max Tegmark says that the universe IS mathematics. You don’t have to necessarily agree, to enjoy this fascinating journey into the nature of reality.”

Prof. Julian Barbour, physicist, author of The End of Time
“Scientists and lay aficionados alike will find Tegmark’s book packed with information and very thought provoking. You may recoil from his thesis, but nearly every page will make you wish you could debate the issues face-to-face with him.”

Prof. Seth Lloyd, Professor of quantum mechanical engineering, MIT, author of Programming the Universe
“In Our Mathematical Universe, renowned cosmologist Max Tegmark takes us on a whirlwind tour of the universe, past, present—and other.  With lucid language and clear examples, Tegmark provides us with the master measure of not only of our cosmos, but of all possible universes.  The universe may be lonely, but it is not alone.”

Prof. David Deutsch, physicist, Dirac Laureate for pioneering quantum computing
“A lucid, engaging account of the various many-universes theories of fundamental physics that are currently being considered, from the multiverse of quantum theory to Tegmark’s own grand vision.”

Amir Alexander, The New York Times
“This is science writing at its best — dynamic, dramatic and accessible. […] ‘Our Mathematical Universe’ is nothing if not impressive. Brilliantly argued and beautifully written, it is never less than thought-provoking about the greatest mysteries of our existence.”

Publishers Weekly (starred review)
“Tegmark offers a fascinating exploration of multiverse theories, each one offering new ways to explain ‘quantum weirdness’ and other mysteries that have plagued physicists, culminating in the idea that our physical world is ‘a giant mathematical object’ shaped by geometry and symmetry. Tegmark’s writing is lucid, enthusiastic, and outright entertaining, a thoroughly accessible discussion leavened with anecdotes and the pure joy of a scientist at work.”

Bryce Cristensen, Booklist (starred review)
“Lively and lucid, the narrative invites general readers into debates over computer models for brain function, over scientific explanations of consciousness, and over prospects for finding advanced life in other galaxies. Though he reflects soberly on the perils of nuclear war and of hostile artificial intelligence, Tegmark concludes with a bracingly upbeat call for scientifically minded activists who recognize a rare opportunity to make our special planet a force for cosmic progress. An exhilarating adventure for bold readers.”

Robert Matthews, BBC Focus magazine
“Max Tegmark is a professor of physics at MIT and a leading expert on theories of the Universe. But he’s also arguably the nearest we have to a successor to Richard Feynman, the bongo-playing, wise-cracking physicist who proved it is possible to be smart, savvy and subversive at the same time. […] now `Mad Max’ has been given the freedom of an entire book. And he hasn't wasted it. Around half of it is a lucid tour d'horizon of what we know about the Universe. The rest is an exhilarating expedition far beyond conventional thinking, in search of the true meaning of reality. Don't be fooled: Tegmark is a very smart physicist, not a hand-waving philosopher, so the going gets tough in parts. But his insights and conclusions are staggering—and perhaps even crazy enough to be true.”

Andrew Liddle, Nature
“Cosmologist Max Tegmark has written an engaging and accessible book, Our Mathematical Universe, that grapples with this multiverse scenario. He aims initially at the scientifically literate public, but seeks to take us to—and, indeed, beyond—the frontiers of accepted knowledge. […] This is a valuable book, written in a deceptively simple style but not afraid to make significant demands on its readers, especially once the multiverse level gets turned up to four. It is impressive how far Tegmark can carry you until, like a cartoon character running off a cliff, you wonder whether there is anything holding you up.”

Peter Woit, The Wall Street Journal
“Our Mathematical Universe is a fascinating and well-executed dramatic argument from a talented expositor.”

Edward Frenkel, The New York Times Sunday Book Review
"An informative survey of exciting recent developments in astrophysics and quantum theory [...] Tegmark participated in some of these pioneering developments, and he enlivens his story with personal anecdotes. [...] Tegmark does an excellent job explaining this and other puzzles in a way accessible to nonspecialists. Packed with clever metaphors”

Nathan Gelgud, Biographile Nathan Gelgud, Biographile
“Just a few years ago, the idea of multiple universes was seen as a crackpot idea, not even on the margins of respectability. […] But now, thanks in large part to Tegmark and his pursuit of controversial ideas, the concept of multiple universes (or a multiverse) is considered likely by many experts in the field.[…] Tegmark's clear, engaging prose style can take you down these exciting and unexpected pathways of thought without making you feel lost. [...] in Our Mathematical Universe, we meet a revolutionary cosmology physicist who is hell bent on figuring out if that theory is true, how to prove it, how to use it, and what it means for the world as we know it.”

Clive Cookson, Financial Times
“Today multiple universes are scientifically respectable, thanks to the work of Tegmark as much as anyone. [...] Physics could do with more characters like Tegmark. He combines an imaginative intellect and a charismatic presence with a determination to promote his subject [...] enough will be comprehensible for non-scientific readers to enjoy an amazing ride through the rich landscape of contemporary cosmology. There are many interesting diversions from the main argument, from an assessment of threats to human civilisation (such as a 30 per cent risk of nuclear war) to the chance of intelligent life elsewhere in our galaxy (lower than astrobiologists like to think). Written in a lively and slightly quirky style, it should engage any reader interested in the infinite variety of nature.”

Mark Buchanan, New Scientist
“The book is an excellent guide to recent developments in quantum cosmology and the ongoing debate over theories of parallel universes....Perhaps this book is proof that the two personalities needed for science—the speculative and sceptic—can readily exist in one individual.”

Peter Forbes, The Independent
"In Our Mathematical Universe, Max Tegmark—a distinguished cosmologist—gives a lucid rundown of the current state of knowledge on the origin, present state, and fate of the universe(s). [...] It is immensely illuminating on the reach of current cosmological theories. [...] From time to time, Tegmark engagingly admits that such ideas sound like nonsense, but he makes the crucial point that if a theory makes good predictions you have to follow all of the consequences. [...] His concluding chapter on the risks humanity faces is wise and bracing: he believes we "are alone in our Universe" but are capable of tackling terrible threats from cosmic accidents, or self-induced nuclear or climatic catastrophes. He doesn’t cite poets but his philosophy adds up to an updated 21st-century version of Thomas Hardy's 'If way to the better there be, it exacts a full look at the worst.'"

Giles Whittell, The Times
"mind-bending book about the cosmos" [...] "Tegmark's achievement is to explain what on earth he is talking about in language any reasonably attentive reader will understand. He is a professor at MIT, and clearly a fine teacher as well as thinker. He tackles the big, interrelated questions of cosmology and subatomic physics much more intelligibly than, say, Stephen Hawking."

Brian Rotman, The Guardian
"Max Tegmark's doorstopper of a book takes aim at three great puzzles: how large is reality? What is everything made of? Why is our universe the way it is? Tegmark, a professor of physics at MIT, writes at the cutting edge of cosmology and quantum theory in friendly and relaxed prose, full of entertaining anecdotes and down-to-earth analogies."

Stephen Hirtle, The Pittsburg Post-Gazette
"Our Mathematical Universe is a delightful book in which the Swedish-born author, now at MIT, takes readers on a roller coaster ride through cosmology, quantum mechanics, parallel universes, sub-atomic particles and the future of humanity. It is quite an adventure with many time-outs along the way.... Our Mathematical Universe gives keen insight into someone who asks questions for the pure joy of answering them."
Read More 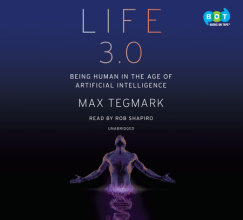