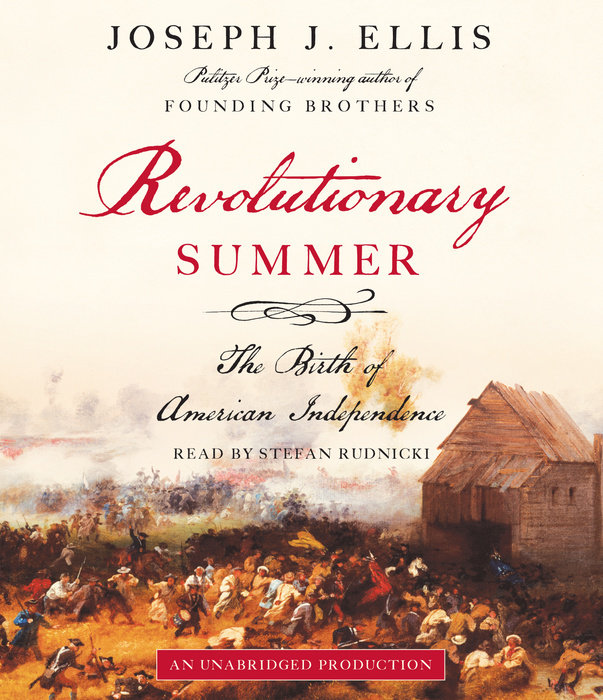 The summer months of 1776 witnessed the most consequential events in the story of our country’s founding. While the thirteen colonies came together and agreed to secede from the British Empire, the British were dispatching the largest armada ever to cross the Atlantic to crush the rebellion in the cradle. The Continental Congress and the Continental Army were forced to make decisions on the run, improvising as history congealed around them. In a brilliant and seamless narrative, Ellis meticulously examines the most influential figures in this propitious moment, including George Washington, John Adams, Thomas Jefferson, Benjamin Franklin, and Britain’s Admiral Lord Richard and General William Howe. He weaves together the political and military experiences as two sides of a single story, and shows how events on one front influenced outcomes on the other.
Revolutionary Summer tells an old story in a new way, with a freshness at once colorful and compelling.

Read More
“Throughout this volume we see the clear-eyed mastery of a historian with the acuity to distill a historical moment into a clash for the ages…But in describing the significance of these momentous events he does not boil off the romance of them.” –Boston Globe

“Ellis, who was awarded the Pulitzer Prize for Founding Brothers: The Revolutionary Generation, is always a dependable guide through the early days of the new nation…[He] gives us a feeling of that time when the quest for liberty began, and we come away knowing that those who took up that quest would not waver and, against all odds, they would win.” –Washington Independent Review of Books

“It’s a poignant counterpoint to the well-worn narrative of Washington’s deification and a tribute to Mr. Ellis’s sympathetic grasp of human nature.” –The Wall Street Journal

“The best thing about Joseph Ellis’ vast writings on Early America is his ability to construct unvarnished and original accounts, clear away myth and yet leave the reader with a sense of the color, irony, humor and—dare I say it—the great good luck present throughout our country’s history.” –The Seattle Times

“What truly matters here is the insurrectionary spirit that suffused the summer of ’76. Elis beautifully re-creates it in his compact but compelling book.” –AARP
“Like any first-rate history, “Revolutionary Summer” leaves the reader wanting to know more.” –The Washington Post

"As usual, Ellis combines powerful narrative with convincing analysis. His tale of the crucial summer of 1776 shows how political and military events wove together to create a new nation. Read this book and understand how America was born." –Walter Isaacson, author of Steve Jobs

“In Revolutionary Summer, Joseph J. Ellis serves up the spirit of 1776 with sparkling prose, lucid analysis, and knowing portraits of Washington, Jefferson, Franklin, and Adams. Best of all, he captures the subtle and often complex interplay between the lofty rhetoric pouring forth from the Continental Congress in Philadelphia and the perilous plight of the Continental Army in New York. This invaluable addition to the rich literature of the Revolutionary War is a volume to savor, ponder, and simply enjoy." –Ron Chernow, author of Washington, A Life

“Ellis once again demonstrates that a proper narrative of events, considered to be so well known as to present no puzzles, can exhibit the deep causes of the conflicts that forced men to war. His lucidity and insight make him the master story teller of the
Revolutionary moment.” –Edmund S. Morgan, author of Benjamin Franklin

“Joseph Ellis has once again liberated the American Revolution from powdered wigs and patriotic cant. Riding briskly through the summer of 1776, he portrays the birth of independence as untidy, improvised, and at times, miraculous. This is a lucid and revelatory read for novices and buffs alike.” –Tony Horwitz

“The definitive book on the revolutionary events of the summer of 1776. Ellis’s prose is characteristically seductive, his insights frequent, his sketches of people and events captivating, and his critical facility always alive…Another brilliantly told story, carried along on solid interpretive grounds, by one of our best historians of the early nation.” –Publishers Weekly, starred review

“With revolutionary-period expertise and extensive knowledge of the founders, Ellis contends that American independence was born during this ‘long summer’…This thought-provoking, well-documented historical narrative is packed with insightful analysis.” –Library Journal

“A brisk and astute history of the intertwined political and military developments of the summer of 1776…Ellis conveys an easy command of the Revolutionary era and its personalities.” –Barnes and Noble review

“A worthwhile chapter in the excellent library of Ellis-produced literature on the American Revolution.” –Smithsonian.com

“Ellis avoids the dryness of some historical tomes…Revolutionary Summer gives a good overview of all the larger issues that loomed over this turning point in American history.” –Bookish blog
Read More