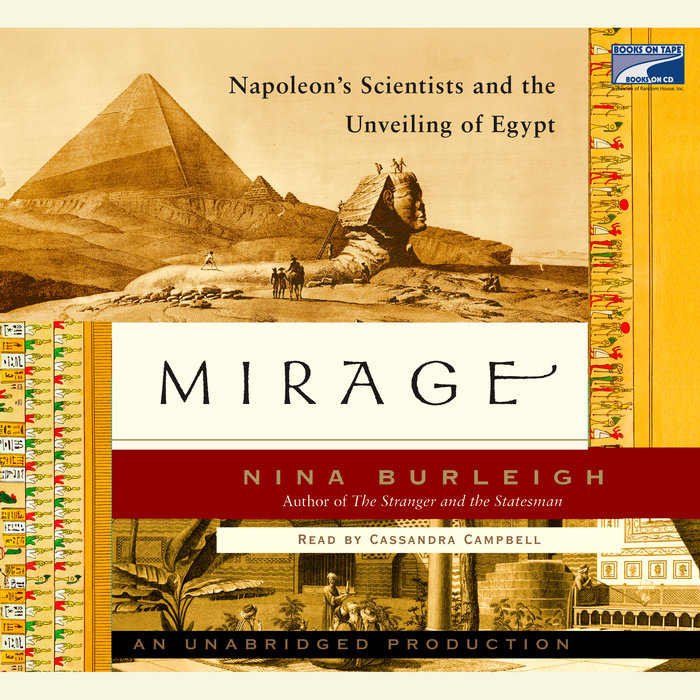 Written by: Nina Burleigh
Read by: Cassandra Campbell
10 Hours and 26 Minutes Imprint: Random House Audio Genre: Social Science - Archaeology Release Date: December 04, 2007
Little more than two hundred years ago, only the most reckless or eccentric Europeans had dared traverse the unmapped territory of the modern-day Middle East. Its history and peoples were the subject of much myth and speculation–and no region aroused greater interest than Egypt.

It was not until 1798, when an unlikely band of scientific explorers traveled from Paris to the Nile Valley, that Westerners received their first real glimpse of what lay beyond the Mediterranean Sea.

Under the command of Napoleon Bonaparte and the French Army, a small and little-known corps of Paris’s brightest intellectual lights left the safety of their laboratories, studios, and classrooms to embark on a thirty-day crossing into the unknown–some never to see French shores again. Carrying pencils instead of swords, specimen jars instead of field guns, these highly accomplished men participated in the first large-scale interaction between Europeans and Muslims of the modern era. And many lived to tell the tale.

Internationally acclaimed journalist Nina Burleigh brings readers back to a little-known landmark adventure at the dawn of the modern era–one that ultimately revealed the deepest secrets of ancient Egypt to a very curious continent.
Read More