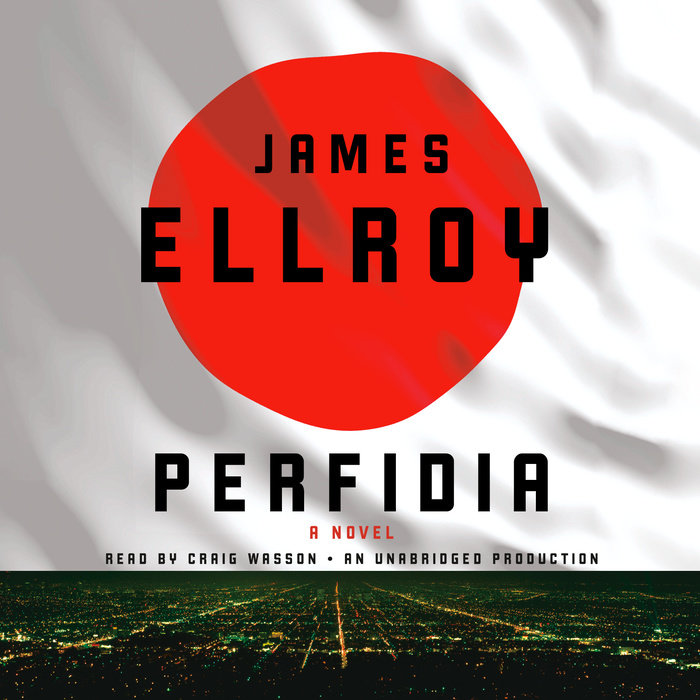 It is December 6, 1941. America stands at the brink of World War II. Last hopes for peace are shattered when Japanese squadrons bomb Pearl Harbor. Los Angeles has been a haven for loyal Japanese-Americans—but now, war fever and race hate grip the city and the Japanese internment begins.

The hellish murder of a Japanese family summons three men and one woman. William H. Parker is a captain on the Los Angeles Police Department. He’s superbly gifted, corrosively ambitious, liquored-up, and consumed by dubious ideology. He is bitterly at odds with Sergeant Dudley Smith—Irish émigré, ex-IRA killer, fledgling war profiteer. Hideo Ashida is a police chemist and the only Japanese on the L.A. cop payroll. Kay Lake is a twenty-one-year-old dilettante looking for adventure. The investigation throws them together and rips them apart. The crime becomes a political storm center that brilliantly illuminates these four driven souls—comrades, rivals, lovers, history’s pawns.

Perfidia is a novel of astonishments. It is World War II as you have never seen it, and Los Angeles as James Ellroy has never written it before. Here, he gives us the party at the edge of the abyss and the precipice of America’s ascendance. Perfidia is that moment, spellbindingly captured. It beckons us to solve a great crime that, in its turn, explicates the crime of war itself. It is a great American novel.
Read More
"Perfidia is a brilliant, breakneck ride. Nobody except James Ellroy could pull this off. He doesn't merely write—he ignites and demolishes.”
—Carl Hiaasen

“[Ellroy’s] style—jumpy, feverish, and anarchic—mirrors the world we enter. . . .  The police are not knights, they’re occupiers, and in Perfidia, Ellroy comes closer than ever to making the case that he writes alt-histories not of the Los Angeles police but of the Los Angeles police state. . . . [He] depicts with frightening authenticity how those innocent of crimes are knowingly framed in the interest of the almighty ‘greater good’.”
—Dennis Lehane, The New York Times Book Review

“The unmistakable product of James Ellroy’s fevered imagination. . . . Perfidia shows us the war on the home front as we have never seen it before. The result is both pure, unadulterated Ellroy and a darkly compelling deconstruction of the recent American past. . . . [It’s] written in a familiar staccato style that delivers large amounts of information in extremely compressed form. The violence, which is frequent and horrific, is described with a clinical exactitude that never flinches. And the entire enterprise is colored by an instantly recognizable tabloid sensibility. . . . Like it or not, believe in it or not, this is James Ellroy’s America, and it is a savage, often frightening place.”
—Bill Sheehan, The Washington Post

“Ellroy successfully spins a drug-alcohol-and-nefarious-deeds-fueled wartime web of double-dealing betrayal, insidious activities, and gruesome atrocities. . . . . It’s tough and ugly and infuriating—and relentlessly readable. . . . [His] often-staccato prose is as jumpy as the time period and the fact that we see or hear about the same incidents from different—and differing—viewpoints enhances that sense of unease and distortion. But the narrative is tautly held together by the ongoing police procedural and by several primary characters.”
—Daneet Steffens, The Boston Globe

“A powerful roar of a story with wonderfully flawed characters and a richly conceived plot that will keep you turning every last one of its 700 pages. . . . This stunning novel resonates throughout with the dark vibe of noir. . . . The story is wickedly elaborate, its plotting brilliant. . . . Kudos to Ellroy for elevating the crime genre with this raucous, sprawling, political beast.”
—Zoë Ferraris, San Francisco Chronicle

“A historical novel, stippled with authentic details of that not-very-innocent era, disguised as a first-rate mystery novel.”
—Fred Grimm, The Miami Herald

“It is welcome news that Ellroy’s latest effort, Perfidia, returns home, sliding in as a prequel to the L.A. Quartet, set in the previous decade. Ellroy’s revisionist impulse is to complicate the patriotic unity of the wartime years much as he undid the myth of placid postwar Los Angeles. . . . What lies ahead, as Ellroy presses deeper into the war years, is anyone’s guess, but like his protagonists, he is driven by a paradoxical obsession: to keep on digging up dark memories of the city, in the hope of rising above the psychic traumas of the past—not reborn, but newly wise.”
—Saul Austerlitz, The Atlantic

“If Ellroy’s bitter visions entice you, Perfidia will take you once again to the underbelly of American history. . . . You will dive into Perfidia with a shiver that is equal parts anticipation and fear—because you know it's going to get very dark very fast. . . . Ellroy’s singular style has been described as jazzlike or telegraphic; here it is insomniac, hallucinogenic, nightmarish.”
—Colette Bancroft, Tampa Bay Times

“Big, brash and overpowering, this will appeal to fans of Ellroy's terse, lurid style.”
—Randy Cordova, The Arizona Republic, Book Pick of the Month

“Ellroy has a way of giving gravitas to ugliness and making brutality beautiful. . . . To see him operating this way, full of power and totally in his comfort zone, is an awesome thing to behold. His LA might not be a city of angels, but the devils he conjures up tell one hell of a tale. . . . [Perfidia is] epic in its depth and evocation of an ugly time and an awful place that, with its sheen of youth and beauty, is too often made glossy and innocent in our memories.”
—Jason Sheehan, All Things Considered/NPR

“A great read. . . . Perfidia is a murder mystery, a subversive historical novel, and a dark meditation on power, politics, race and justice.”
—Mark Lindquist, The Seattle Times

“[The L.A. Quartet] may be the ne plus ultra of noir, grittier than Chandler, more operatic than Hammett, and more violent even than Cain. . . . Ellroy whittles [his characters’] thoughts and actions into sentences the way others do shivs—lean, brutalist, and intended to puncture, to penetrate.”
—Chris Wallace, Interview magazine

“Compelling. . . . A triumphant return to the violent fictional world where he started—1940s Los Angeles.”
—Andrew Neather, The Evening Standard (London)

“There has never been a writer like James Ellroy. Since the Eighties, in novels such as L.A. Confidential and The Cold Six Thousand, he has been making real a secret world behind the official history of America, where bad girls mingle with very bad men, and the designs of murderers, cops, mobsters, movie stars and politicians can be equally callous, equally deadly. He melds racial invective, street slang, hepcat jazz talk, junkie jive and scandal-rag rants into prose of controlled intensity, and to enter it is to experience a vivid eyeball rush of recognition.”
—Chris Harvey, The Telegraph (London)

“Perfidia brings the two sides of his work together: the period crime-writing of LA Quartet, with its highlighting of police misdemeanours, and the wider politico-historical concerns of his subsequent Underworld USA trilogy.”
—The Guardian (London), “Essential New Fiction”

“Masterful storytelling on an enormous scale. Nobody does it like Ellroy.”
—Joshua Chaplin Sky, LitReactor

“[Perfidia] is a war novel like no other. It’s complicated, and the author wouldn’t have it any other way. There's no telling the good guys from the bad in Ellroy’s Los Angeles, because there are no good guys. . . . Ellroy is not only back in form—he’s raised the stakes.”
—Kirkus Reviews, starred review

“A return to the scene of Ellroy’s greatest success and a triumphant return to form. . . . His character portrayals have never been more nuanced or—dare we say it—sympathetic. . . . A disturbing, unforgettable, and inflammatory vision of how the men in charge respond to the threat of war. It’s an ugly picture, but just try looking away.”
—Booklist, starred review