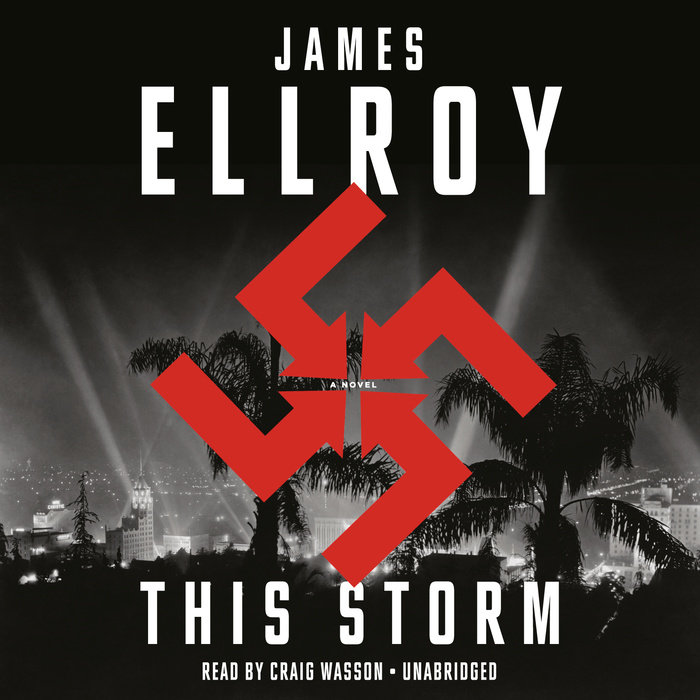 A body is unearthed in Griffith Park. The cops tag it a routine dead-man job. They're wrong. It's an early-warning signal of Chaos.

There's a murderous fire and a gold heist. There's Fifth Column treason on American soil. There are homegrown Nazis, Commies, and race racketeers. It's populism ascendant. There's two dead cops in a dive off the jazz-club strip. And three men and one woman have a hot date with history.

Elmer Jackson is a corrupt Vice cop. He's a flesh peddler and a bagman for the L.A. Chief of Police. Hideo Ashida is a crime-lab whiz, lashed by anti-Japanese rage. Dudley Smith is PD hardnose working Army Intelligence. He's gone rogue and gone all-the-way fascist. Joan Conville was born rogue. She's a defrocked Navy lieutenant and a war profiteer to her core.

L.A. '42. Homefront madness. Wartime inferno--This Storm is James Ellroy's most audacious novel yet. It is by turns savage, tender, elegiac. It lays bare and celebrates crazed Americans of all stripes. It is a masterpiece.
Read More
Praise for James Ellroy:

“One of the great American writers of our time.”
—Los Angeles Times

“Ask me to name the best living novelist who’s fierce, brave, funny, scatological, beautiful, convoluted, and paranoid . . . and it becomes simple: James Ellroy. If insanity illuminated by highly dangerous strokes of literary lightning is your thing, then Ellroy’s your man.”
—Stephen King

Q&A With Craig Wasson, Narrator of This StormFather’s Day is Almost Here! See Our Audiobook Picks for Dads