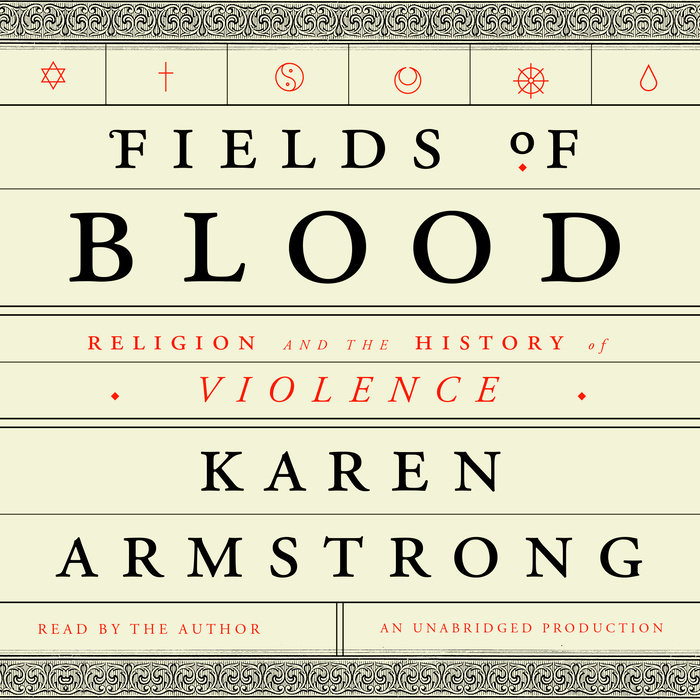 From the renowned and best-selling author of A History of God, a sweeping exploration of religion and the history of human violence.

For the first time, religious self-identification is on the decline in American. Some analysts have cited as cause a post-9/11perception: that faith in general is a source of aggression, intolerance, and divisiveness—something bad for society. But how accurate is that view? With deep learning and sympathetic understanding, Karen Armstrong sets out to discover the truth about religion and violence in each of the world’s great traditions, taking us on an astonishing journey from prehistoric times to the present.

While many historians have looked at violence in connection with particular religious manifestations (jihad in Islam or Christianity’s Crusades), Armstrong looks at each faith—not only Christianity and Islam, but also Buddhism, Hinduism, Confucianism, Daoism, and Judaism—in its totality over time. As she describes, each arose in an agrarian society with plenty powerful landowners brutalizing peasants while also warring among themselves over land, then the only real source of wealth. In this world, religion was not the discrete and personal matter it would become for us but rather something that permeated all aspects of society. And so it was that agrarian aggression, and the warrior ethos it begot, became bound up with observances of the sacred.

In each tradition, however, a counterbalance to the warrior code also developed. Around sages, prophets, and mystics there grew up communities protesting the injustice and bloodshed endemic to agrarian society, the violence to which religion had become heir. And so by the time the great confessional faiths came of age, all understood themselves as ultimately devoted to peace, equality, and reconciliation, whatever the acts of violence perpetrated in their name.

Industrialization and modernity have ushered in an epoch of spectacular and unexampled violence, although, as Armstrong explains, relatively little of it can be ascribed directly to religion. Nevertheless, she shows us how and in what measure religions, in their relative maturity, came to absorb modern belligerence—and what hope there might be for peace among believers of different creeds in our time.

At a moment of rising geopolitical chaos, the imperative of mutual understanding between nations and faith communities has never been more urgent, the dangers of action based on misunderstanding never greater. Informed by Armstrong’s sweeping erudition and personal commitment to the promotion of compassion, Fields of Blood makes vividly clear that religion is not the problem.
Read More
“Impressive . . . Particularly valuable is the book’s long historical span, which allows the reader to trace not just the early history of warrior faith in such societies but also its evolution in modern times . . . That long historical reach allows Armstrong to argue very convincingly against some modern clichés about religious violence . . .  Fields of Blood has a terrific amount to offer virtually any reader.”
--Philip Jenkins, The Christian Century

“A vast overview of religious and world history, sketching the early evolution of all global faiths . . . Armstrong denounces authoritarian secularism with eloquent passion . . . [and] does a good job of explaining why people who are deeply invested in traditional beliefs and social systems feel threatened and inclined to fight back.”
--The Economist

“Careful, fair, and true . . . Armstrong demonstrates again and again that the great spasms of cruelty and killing through history have had little or no religious overlay . . . [and that] an overemphasis on religion’s damage can blind people to the nonholy terrors that their states inflict . . . Apart from its larger argument, the book is packed with little insights and discoveries . . . The page-by-page detail of the book is much of the reason to read it . . . I generally end up judging books in two ways: by whether I can remember them and whether they change the way I think about the world. It’s too soon to know about the first test, but on the basis of the second I recommend ‘Fields of Blood.’”
--James Fallows, New York Times Book Review

“A valuable, readable rebuttal of a pernicious contemporary myth. The problem is not that religion corrupts human nature, but that human greed too often corrupts religion . . . Armstrong goes through the centuries and assorted cultures to demonstrate again and again how religious principles and religious leaders were co-opted to support warfare.”
--Sarah Bryan Miller, St. Louis Post-Dispatch

“A convincing case that the relationship of religion to violence is complicated and ambivalent.”
--Molly Farneth, Commonweal

“In a lucid and fleet prose . . . Armstrong argues that religion has been made a scapegoat for wars and violence . . . [She is] one of the keenest minds working on understanding the role religion plays in cultures around the globe.”
–Graydon Royce, Minneapolis Star Tribune

“Armstrong comes out swinging . . . [Her] prose is crisp and lucid, her command of fact encyclopedic, and her insights often brilliant.”
–David Laskin, The Seattle Times

“So important . . . [Fields of Blood] has been widely acclaimed for its scholarship, and deservedly so.”
–Maureen Fiedler, National Catholic Reporter

“Thought-provoking . . . a tour-de-force of the history of the world’s major religions.”
–Rebecca Denova, Pittsburgh Post-Gazette

“[A] bold new book . . . Armstrong makes a powerful case that critics like Dawkins ignore the lessons of the past and present in favor of a ‘dangerous oversimplification’ . . . [Her argument] is strong enough to change minds.”
–Randy Dotinga, The Christian Science Monitor

“With exquisite timing, religious historian Karen Armstrong steps forth with Fields of Blood . . . Laden with example . . . [Armstrong’s] overall objective is to call a time-out. Think before you leap to prejudice, she says . . . Among the most interesting stuff in [her] book is her deconstruction of the modern Islamic stereotype . . . In the end, the point Armstrong feels most adamant about is that by blaming religion for violence, we are deliberately and disastrously blinding ourselves to the real, animating issues in the Middle East and Africa.”
–Patricia Pearson, The Daily Beast

“Elegant and powerful . . . Both erudite and accurate, dazzling in its breadth of knowledge and historical detail . . . [Armstrong] seeks to demonstrate that, rather than putting the blame on the bloody images and legends in sacred texts and holy history, we should focus on the political contexts that frame religion.”
–Mark Juergensmeyer, The Washington Post

“A timely work . . . This passionately argued book is certain to provoke heated debate against the background of the Isis atrocities and many other acts of violence perpetrated around the world today in the name of religion.”
–John Cornwell, Financial Times

“Detailed and often riveting . . . a mighty offering . . . Armstrong can be relied on to have done her homework and she has the anthropologist’s respect for the ‘otherness’ of other cultures . . . [Her] oeuvre is extensive, bringing a rare mix of cool-headed scholarship and impassioned concern for humanity to bear on the vexed topic of religion . . . [And she] is nothing if not democratic in her exposition.”
–Salley Vickers, The Guardian (UK)

“Eloquent and empathetic, which is rare, and impartial, which is rarer . . . [Armstrong] ranges across the great empires and leading faiths of the world. Fields of Blood is never less than absorbing and most of the time as convincing as it is lucid and robust . . . [This] wonderful book certainly cleanses the mind. It may even do a little repair work on the heart.”
–Ferdinand Mount, The Spectator (UK)

“Characteristically eloquent and instructive . . . Armstrong’s survey of four millennia of organized violence with religious overtones . . . aspires to put historical flesh on the bare bones of [the facts] . . . Modern society “has made a scapegoat of faith”, thereby obscuring and thus partly exonerating the far more massive crimes of modern secular states and armies, while also defaming the majority of religious believers who work for tolerance, justice and peace by nonviolent means . . . We are all awash in “fields of blood”. [This] engaging new book makes that case eloquently.”
–Scott Appleby, The Tablet (UK)

“From Gilgamesh to bin Laden, [Armstrong covers] almost five millennia of human experience . . . Supplying the context of what may look like religiously motivated episodes of violence, in order to show that religion as such was not the prime cause . . . She is no doubt right to say that the aggression of a modern jihadist does not represent some timeless essence of religion, and that other political, economic and cultural factors loom large in the stories of how and why individuals become radicalized.”
–Noel Malcolm, The Telegraph (UK)

“Fluent and elegant, never quite long enough . . . as much about the nature of warfare as it is about faith . . . [Armstrong] is taking issue with a cliché, the routine claim that religion, advertising itself as humanity’s finest expression, has been responsible for most of the woes of the species . . . The Crusades, the Inquisition, the Wars of Religion, even modern “jihadi” terrorism: each is investigated . . . The picture is bleak, but certainly accurate . . . Exploitation and oppression continue . . . but these provide a challenge for the godly and the godless alike. The proposition, like the book, is noble.”
–Ian Bell, The Sunday Herald (Scotland)

“A well-written historical summary of what have traditionally been viewed as “religious” wars, showing convincingly that in pretty much all cases it was not so much religion as it was political issues that fueled the conflict.”
–Augustine J. Curley, Library Journal (starred review)

“Provocative and supremely readable . . . the comparative nature of [Armstrong’s] inquiry is refreshing . . . Bracing as ever, [she] sweeps through religious history around the globe and over 4,000 years to explain the yoking of religion and violence and to elucidate the ways in which religion has also been used to counter violence.”
–Publishers Weekly (starred review)

“Epic in scale . . . a comprehensive and erudite study of the history of violence in relation to religion . . . Armstrong leads readers patiently through history . . . her writing is clear and descriptive, her approach balanced and scholarly . . . An intriguing read, useful resource and definitive voice in defense of the divine in human culture.”
–Kirkus Reviews (starred review)

“Armstrong again impresses with the breadth of her knowledge and the skill with which she conveys it to us.”
–Ray Olson, Booklist (starred review)
Read More 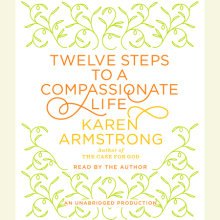