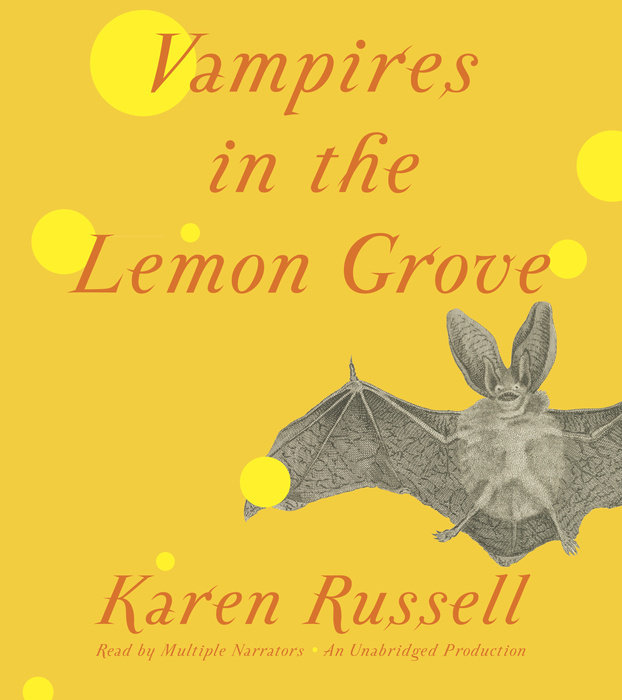 In the collection's marvelous title story, two aging vampires in a sun-drenched Italian lemon grove find their hundred-year marriage tested when one of them develops a fear of flying. In "The Seagull Army Descends on Strong Beach, 1979," a dejected teenager discovers that the universe is communicating with him through talismanic objects left in a seagull's nest. "Proving Up" and "The Graveless Doll of Eric Mutis"--stories of children left to fend for themselves in dire predicaments--find Russell veering into more sinister territory, and ultimately crossing the line into full-scale horror. In "The New Veterans," a massage therapist working with a tattooed war veteran discovers she has the power to heal by manipulating the images on his body. In all, these wondrous new pieces display a young writer of superlative originality and invention coming into the full range and scale of her powers.

List of Stories and Readers:
Vampires in the Lemon Grove read by Arthur Morey
Reeling for the Empire read by Joy Osmanski
The Seagull Army Descends on Strong Beach, 1979 read by Kaleo Griffith
Proving Up read by Jesse Bernstein
The Barn at the End of Our Term read  by Mark Bramhall
Dougbert Shackleton's Rules of Antarctic Tailgating read by Michael Bybee
The New Veterans read by Romy Rosemont
The Graveless Doll of Eric Mutis read by Robbie Daymond
Read More

Praise for Vampires in the Lemon Grove

“Vampires in the Lemon Grove shows Ms. Russell more in control of her craft than ever . . . Ms. Russell deftly combines elements of the weird and supernatural with acute psychological realism; elements of the gothic with dry, contemporary humor. From apparent influences as disparate as George Saunders, Saki, Stephen King, Carson McCullers and Joy Williams, she has fashioned a quirky, textured voice that is thoroughly her own: lyrical and funny, fantastical and meditative . . . Underscores her fecund and constantly surprising storytelling gifts . . . In these tales Ms. Russell combines careful research with minutely imagined details and a wonderfully vital sleight of hand to create narratives that possess both the resonance of myth and the immediacy of something new.”
—Michiko Kakutani, The New York Times

“Hilarious, exquisite, first-rate . . . It’s hard not to reflect on the origins of this wildly talented young writer’s ideas . . . A grim, stupendous magic is at work in these stories . . . Her work has a velocity and trajectory that is little less than dazzling and a tough, enveloping, exhilarating voice that cannot be equaled.”
—Joy Williams, The New York Times Book Review

“One of the most innovative, inspired short-story collections in the past decade . . . Vampires in the Lemon Grove is flawless and magnificent, and there’s absolutely no living author quite like Karen Russell.”
—Michael Schaub, NPR

“Astonishing . . . Vampires in the Lemon Grove stands out as Russell’s best book . . . with prose so alive it practically backflips off the page . . . One of Russell’s seemingly endless gifts as a writer is that her invented worlds shed new light on the one in which we live.”
—Molly Antopol, San Francisco Chronicle

“Beautiful tales . . . Vampires in the Lemon Grove should cement Russell’s reputation as one of the most remarkable fantasists writing today.”
—Elizabeth Hand, Washington Post

“Russell is so grand a writer—so otherworldly, yet emotionally devastating; so daffy and daring—that she doesn’t need an imprimatur to stake her claim to literary genius . . . One of the great American writers of our young century.”
—Maureen Corrigan, NPR

“Each story is more inventive than the last, juxtaposing mundane human experiences and profound questions about consciousness, love, and mortality, with a hint of the supernatural . . . As Russell’s imagination soars, so does our joy in reading this collection.”
—Oprah.com

“Karen Russell’s imagination is one again on full, Technicolor, mind-bending display . . .  If Vampires in the Lemon Grove is an indicator of the future, Russell’s stories will be seizing our imaginations—and nibbling at the edges of our nightmares—for years to come.”
—Amy Driscoll, Miami Herald

“A force to behold . . . Russell establishes herself as a writer to track and to treasure.”
—Madeleine Blais, Chicago Tribune

“Witty, and wise, and brimming with vitality . . . In Russell’s stories, malice strolls with morality, horror tangos with humor, and the spirits of Franz Kafka and Flannery O’Connor meet with unexpected comity . . . With a voice that could spring from an unleashed demon—or an angel on amphetamines—Russell fills this exuberant collection with life’s radiance and shadows, enhanced by the possibility of redemption.”
—Richmond Times-Dispatch

“Karen Russell’s stories defy definition. They are at once warm and sinister, a bubblebath with a shark fin lurking underneath the suds . . . fiction that expands the possible, gorgeous prose forged in the fires of dark beauty and wistful longing.”
—The Millions

“Like Russell’s previous work, Vampires in the Lemon Grove presents a writer with a seemingly infinite imagination and a tremendous appreciation for the possibilities of language, particularly its ability to extract beauty from the darkest places and situations . . . Her originality is relentless.”
—SouthFlorida.com

“Exquisitely peculiar . . . Vampires trades in the mythological waters of the Florida Everglades for eight new, but still darkly fantastical and dangerous worlds that constantly remind the reader that monsters and violence are always around the corner, and in ourselves.”
—Wall Street Journal

“Reading Vampires in the Lemon Grove is like taking off on a round-the-universe trip, each story a new adventure where the usual rules don’t apply . . . What Russell is doing doesn’t yet have a name. And that is why her work is so wonderful.”
—Kirkus.com

“In these stories, familiar human emotions leap into relief against backdrops of almost Tim Burton-like weirdness . . . Her stories are as robust as can be. But they also look like something internal flipped out: us.”
—New York

“A master of magical realism . . . Ms. Russell is at her best alternating between the wildly fantastical and the utterly banal, especially when she finds a way to fuse the two together . . . There is an exuberance to her descriptive abilities, a kind of ludic writerly joy in the process that translates to a readerly thrill in the results.”
—New York Observer

“Russell’s tales flirt with the fantastical, but are rooted in darker realities . . . Even as she transforms the everyday into a wriggling bestiary, replete with colorful hallucinations and ghosts, her most haunting bits rely on the depiction of human impulses.”
—Mother Jones

“Powerful . . . Russell pulls the rug out on our imagination, creating perplexing, surreal scenarios that bump into the common reality that most of us take for granted.”
—Minneapolis Star Tribune

“Karen Russell casts another spell with her otherworldly collection of stories . . . Is she a Southern Gothicist? A parabolist? A moralist? Do her stories expand upon old histories, or create new, fantastical explanations for them? But the stories, without ever confining themselves to one genre or tradition, speak for themselves.”
—Bullett Magazine

“Dazzlingly strange . . . Vacillating between horror and humor, Russell’s writing recalls both George Saunders and vintage Stephen King, sometimes simultaneously. The unifying factor is Russell’s blend of the real and supernatural, mundane and extraordinary—her magical realism is at times unsettling, but often darkly funny, too.”
—Time Out Chicago

“Another madcap ride down the rabbit hole. Each of the eight tales here is wildly inventive, some fiendishly bizarre . . . Russell’s imagination routinely runs riot.
—The National

“Nearly flawless . . . Russell’s best work manages to both create a fascinating, surreal world and coax meaning out of it . . . This book covers war, gender issues, puberty, marriage, and death with such flair and delight that it’s still surprising to realize this is only Russell’s second story collection.”
—The Onion (Grade: A-)

“It’s difficult to think of another writer working today who has Russell’s talent for gorgeous, risky prose and a seemingly endless arsenal of odd, inventive narratives. Give her a setting and she’ll grow beautiful monsters in its brilliantly described ecosystem . . . Russell has created eight new theme parks in her stories; eight new cages of horror and heart and winding metamorphoses that would take a normal writer a lifetime to dream into being.”
—Interview Magazine

“The stories in Karen Russell’s wonderful collection embrace the monstrous, the mutant, the mysterious . . . Set at the intersection of destiny and free will, nature and the supernatural, light and dark, the stories—even the frothiest—are sea deep, scary smart, richly inventive, highly illuminating, and gorgeously written.”
—More Magazine

“In pieces that range from diverting frolics to ominous, cautionary tales, the author uplifts underdogs and rattles the willfully ignorant . . . Russell knows to ground her fancies with human fragility. This, and the ideas at play, is what sticks around.”
—Time Out New York

“Macabre, surprising, sympathetic, and in the end deeply empowering . . . At her best, Russell converts your doubts about her narrative audacity into a hard-won revelation of the truth in her prose. As she gracefully unspools the interior of her best realized characters, you forget that her stories could ever feel unnatural.”
—Oxford American

“Excellent . . . Vampires earns its darkness, amounting to an update on E.T.A. Hoffman’s tales . . . It’s a strange compliment, but a genuine one, to say that Russell’s imagination really is capable of inducing nausea and terror.”
—Barnes and Noble Review

“Magical . . . All of the stories collected in Vampires in the Lemon Grove are exceptional. Many writers attempt magical realism, but few succeed the way Karen Russell can. Her writing is tight, her characters are instantly lovable, and, most importantly, her stories are believable.”
—Portland Book Review

“Russell has the wonderful ability for mixing the magical with the mundane to create stories that are not only fun to read but kind of kick you in your heart at the same time . . . She’s clever as hell.”
—Book Riot

“Vampires in the Lemon Grove brings together eight stories of transmutation, transmigration, and transgression for a collection that enchants and beguiles throughout.”
—PopMatters

“If you liked Russell’s novel Swamplandia, you’ll love her stories . . . I needed something truly wonderful to read, and I got lucky, finding the book I have most admired since the beginning of 2013, and that’s saying quite a bit!”
—Weekend Local Reader

“Russell doesn’t work small. She’s a world builder, and the stranger the better . . . Russell’s great gift—along with her antic imagination—is her ability to create whole landscapes and lifetimes of strangeness within the confines of a short story.”
—Publishers Weekly (starred review)

“Russell returns to the story form with renewed daring, leading us again into uncharted terrain, though as fantastic as the predicaments she imagines are, the emotions couldn’t be truer to life . . . Mind-blowing, mythic, macabre, hilarious.”
—Booklist (starred review)