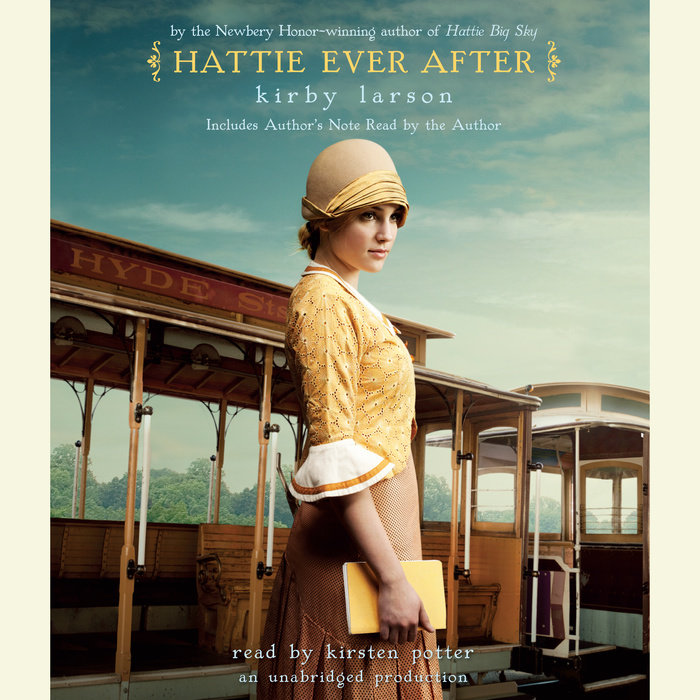 Written by: Kirby Larson
Read by: Kirsten Potter & Kirby Larson
5 Hours and 46 Minutes Imprint: Listening Library Ages 12 and up Release Date: February 12, 2013
After leaving Uncle Chester's homestead claim, orphan Hattie Brooks throws a lasso around a new dream, even bigger than the Montana sky. She wants to be a reporter, knowing full well that a few pieces published in the Arlington News will not suffice. Real reporters must go to Grand Places, and do Grand Things, like Hattie's hero Nellie Bly. Another girl might be stymied by this, but Hattie has faced down a hungry wolf and stood up to a mob of angry men. Nothing can squash her desire to write for a big city newspaper. A letter and love token from Uncle Chester's old flame in San Francisco fuels that desire and Hattie jumps at the opportunity to get there by working as a seamstress for a traveling acting troupe. This could be her chance to solve the mystery of her "scoundrel" uncle and, in the process, help her learn more about herself. But Hattie must first tell Charlie that she will not join him in Seattle. Even though her heart approves of Charlie's plan for their marriage, her mind fears that saying yes to him would be saying no to herself. Hattie holds her own in the big city, literally pitching her way to a byline, and a career that could be even bigger than Nellie Bly's. But can making headlines compensate for the pain of betrayal and lost love? Hattie must dig deep to find her own true place in the world. Kirby Larson once again creates a lovingly written novel about the remarkable and resilient young orphan, Hattie Inez Brooks.
Read More
Starred Review, Kirkus Reviews, December 15, 2012:
“Readers will fall for this earnest, wide-eyed and strong-minded young woman… Historical fiction with heart.”

Washington Post, March 10, 2013:
"Larson brings this bustling city to vivid life through glimpses of Chinatown, Great Beach Highway and the Chronicle offices, with their “inky perfume” and clattering presses. The novel also has a nice tie-in to National Women’s History Month, exploring as it does the changing role of women in the post-World War I workplace...[Don't let the] age range stop you from sharing this lively tale with younger newshounds and history buffs."

Booklist, February 1, 2013:
"One of the best parts about this is the way Larson brings San Francisco, circa 1919, alive—especially the opportunities and stumbling blocks for women...Fans of the first book will be thrilled to see the ups and downs of Hattie’s romance with old boyfriend Charlie, while her relationship with another fellow leads to an interesting twist. This is reminiscent of Maude Hart Lovelace’s later Betsy books, whose heroine also wanted to write. And that’s high praise."

Publishers Weekly, February 18, 2013:
"Fans of the first novel will gladly reconnect with this memorable heroine, but the narrative stands firmly on its own, too."

The Bulletin of the Center for Children's Books, February 2013:
"Hattie is the kind of character readers actually wonder about after closing the book, and her fans from her first title will be satisfied, and even perhaps relieved, to know she finds her footing in the world."

School Library Journal, March 2013:
"Larson’s meticulous research brings early-20th-century San Francisco to life, and readers will feel that they are right there with Hattie in the hustle and bustle of a booming city. The way in which she achieves not only her professional ambitions but also personal growth and fulfillment leads to a wholly satisfying conclusion, and the author’s note gives readers a good feel for the solid historical foundations of Hattie’s story."

Starred Review, Shelf Awareness, March 26, 2013:
"Engaging and absorbing...Hattie Ever After reflects Larson's meticulous research, yet the historical details never overwhelm the story or the characters. Instead, all the elements combine to form a multilayered and colorful story. Readers will be thrilled to follow the trials and triumphs of Miss Hattie Inez Brooks in 1919 San Francisco."
Read More 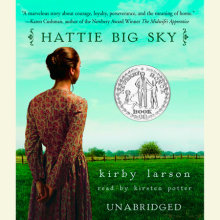 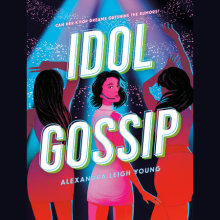 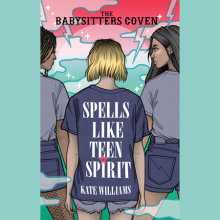 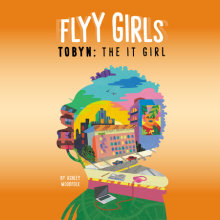