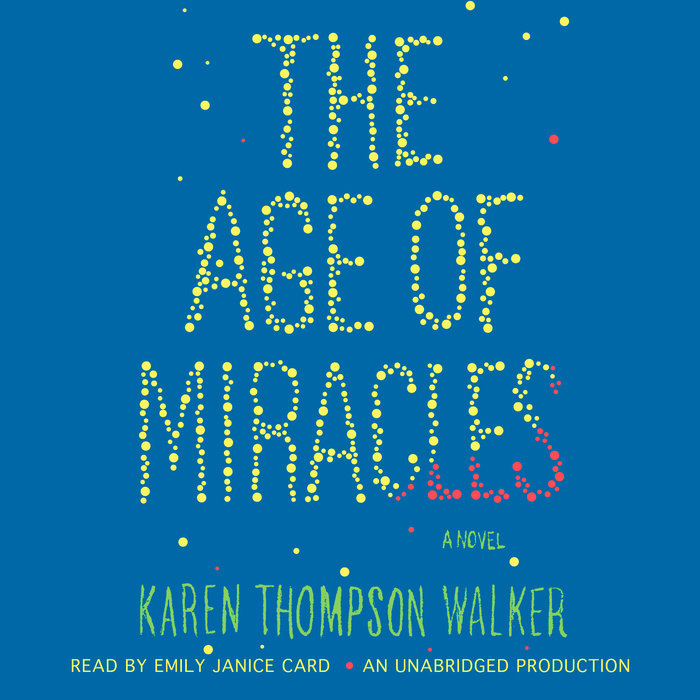 With a voice as distinctive and original as that of The Lovely Bones, and for the fans of the speculative fiction of Margaret Atwood, Karen Thompson Walker’s The Age of Miracles is a luminous, haunting, and unforgettable debut novel about coming of age set against the backdrop of an utterly altered world.

“It still amazes me how little we really knew. . . . Maybe everything that happened to me and my family had nothing at all to do with the slowing. It’s possible, I guess. But I doubt it. I doubt it very much.”

On a seemingly ordinary Saturday in a California suburb, Julia and her family awake to discover, along with the rest of the world, that the rotation of the earth has suddenly begun to slow. The days and nights grow longer and longer, gravity is affected, the environment is thrown into disarray. Yet as she struggles to navigate an ever-shifting landscape, Julia is also coping with the normal disasters of everyday life—the fissures in her parents’ marriage, the loss of old friends, the hopeful anguish of first love, the bizarre behavior of her grandfather who, convinced of a government conspiracy, spends his days obsessively cataloging his possessions. As Julia adjusts to the new normal, the slowing inexorably continues.

Praise for The Age of Miracles

“A genuinely moving tale that mixes the real and surreal, the ordinary and the extraordinary, with impressive fluency and flair.”—Michiko Kakutani, The New York Times

“Gripping drama . . . flawlessly written; it could be the most assured debut by an American writer since Jennifer Egan’s Emerald City.”—The Denver Post

“If you begin this book, you’ll be loath to set it down until you’ve reached its end.”—San Francisco Chronicle

Praise for The Age of Miracles

“[A] moving tale that mixes the real and surreal, the ordinary and the extraordinary with impressive fluency and flair … Ms. Walker has an instinctive feel for narrative architecture, creating a story, in lapidary prose, that moves ahead with a sense of both the inevitable and the unexpected … Ms. Walker maps [her characters’] inner lives with such sure-footedness that they become as recognizable to us as people we’ve grown up with or watched for years on television… [A] precocious debut…one of this summer’s hot literary reads.”--Michiko Kakutani, The New York Times

“Walker creates lovely, low-key scenes to dramatize her premise…The spirit of Ray Bradbury hovers in the mixture of the portentous and quotidian.”--The New Yorker

“[Walker] matches the fierce creativity of her imagination with a lyrical and portentous understanding of the present.”--People (4 stars)

“This haunting and soul-stirring novel about the apocalypse is transformative and unforgettable.”--Marie Claire

“If you begin this book, you'll be loath to set it down until you've reached its end… The Age of Miracles reminds us that we never know when everything will change, when a single event will split our understanding of personal history and all history into a Before and an After.” –The San Francisco Chronicle

“The perfect combination of the intimate and the pandemic…Flawlessly written; it could be the most assured debut by an American writer since Jennifer Egan's ‘Emerald City.’”--Denver Post

"The Age of Miracles lingers, like a faded photo of a happy time. It is stunning.”–Cleveland Plain Dealer

“Both utterly realistic and fantastically dystopian…The big miracles, Walker seems to be saying, may doom the world at large, but the little ones keep life worth living.”--Minnesota Herald Tribune

“Evocative and poetic...I loved this book from the first page.”--Huntington News

“Walker’s tone can be properly [Harper] Lee-esque; both Julia and Scout grapple with the standard childhood difficulties as their societies crumble around them. But life prevails, and the stunning Miracles subtly conveys that adapting.”--Time Out New York

“[A] gripping debut . . . Thompson’s Julia is the perfect narrator. . . . While the apocalypse looms large—has in fact already arrived—the narrative remains fiercely grounded in the surreal and horrifying day-to-day and the personal decisions that persist even though no one knows what to do. A triumph of vision, language, and terrifying momentum, the story also feels eerily plausible, as if the problems we’ve been worrying about all along pale in comparison to what might actually bring our end.”—Publishers Weekly (starred review)

“In Walker’s stunning debut, a young California girl coming of age in a dystopian near future confronts the inevitability of change on the most personal level as life on earth withers … She goes through the trials and joys of first love. She begins to see cracks in her parents’ marriage and must navigate the currents of loyalty and moral uncertainty. She faces sickness and death of loved ones. ... Julia’s life is shaped by what happens in the larger world, but it is the only life she knows, and Walker captures each moment, intimate and universal, with magical precision. Riveting, heartbreaking, profoundly moving.”—Kirkus Reviews (starred review)

“What a remarkable and beautifully wrought novel. In its depiction of a world at once utterly like and unlike our own, The Age of Miracles is so convincingly unsettling that it just might make you stockpile emergency supplies of batteries and bottled water. It also—thank goodness—provides great solace with its wisdom, its compassion, and the elegance of its storytelling.”—Curtis Sittenfeld, author of Prep

“‘Miracles’ indeed. Karen Thompson Walker’s debut novel is a stunner from the first page—an end-of-the-world, coming-of-age tale of quiet majesty. I loved this novel and can’t wait to see what this remarkable writer will do next.”—Justin Cronin, author of The Passage

“Is the end near? In Karen Thompson Walker’s beautiful and frightening debut, sunsets are becoming rarities, “real-timers” live in daylight colonies while mainstream America continues to operate on the moribund system of “Clock Time,” and environmentalists rail against global dependence on crops that guzzle light. Against this apocalyptic backdrop, Walker sets the coming-of-age story of brave, bewildered Julia, who wonders at the “malleable rhythms” of the increasingly erratic adults around her. Like master fabulists Steven Millhauser and Kevin Brockmeier, Karen Thompson Walker takes a fantastic premise and makes it feel thrillingly real. In precise, poetic language, she floods the California suburbs with shadows and a doomsday glow, and in this altered light shows us amazing things about how one family responds to a stunningly imagined global crisis.”—Karen Russell, author of Swamplandia!

“This is what imagination is. In The Age of Miracles, the earth’s rotation slows, gravity alters, days are stretched out to fifty hours of sunlight. In the midst of this, a young girl falls in loves, sees things she shouldn't and suffers heartbreak of the most ordinary kind. Karen Thompson Walker has managed to combine fiction of the dystopian future with an incisive and powerful portrait of our personal present.”—Amy Bloom, author of Away

“The Age of Miracles is pure magnificence. Deeply moving and beautifully executed, Karen Thompson Walker has written the perfect novel for the global-warming age.”—Nathan Englander, author of For the Relief of Unbearable Urges

“Reading The Age of Miracles is like gazing into a sky of constellations and being mesmerized by the the strange yet familiar sensation of infinity. Beautifully written, the novel lets the readers see the world within us and the world without with an unforgettable freshness.”—Yiyun Li, author of Gold Boy, Emerald Girl

“The Age of Miracles spins its glowing magic through incredibly lucid and honest prose, giving equal care and dignity to the small spheres and the large. It is at once a love letter to the world as we know it and an elegy.”—Aimee Bender, author of The Particular Sadness of Lemon Cake

“Gripping from first page to last, The Age of Miracles is itself a small, perfectly formed miracle: Written with the cadence and pitch of poetry, this gem of a novel is a wrenching and all-too-believable parable for our times, and one of the most original coming-of-age stories I have ever read. Karen Thompson Walker is the real deal.”—Dani Shapiro, author of Devotion

“The Age of Miracles is harrowing and beautiful on the ways in which those catastrophes already hidden about us in plain sight, once ratcheted up just a bit, provide us with a glimpse of the end of our species’ run on earth: the uncanny distress of hundreds of beached whales, or the surreal unease of waves rolling across the rooftops of beachfront houses. And as it does it reminds us of all of the miracles of human regard that will have taken place before then: the way compassion will retain its resilience, and the way, for those of us in love, a string of afternoons will be as good as a year.”—Jim Shepard, author of Like You’d Understand, Anyway (National Book Award finalist) 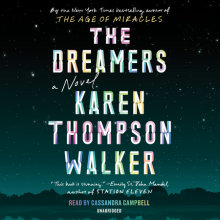