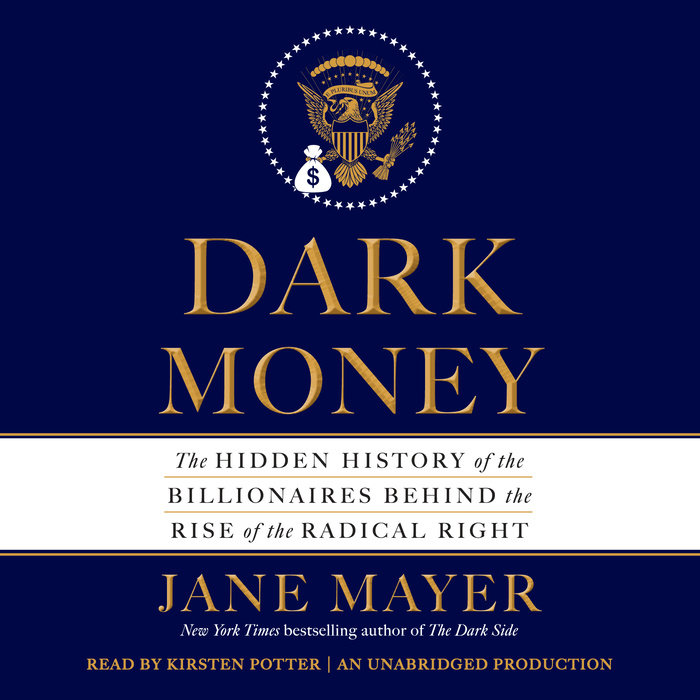 Written by: Jane Mayer
Read by: Kirsten Potter
16 Hours and 55 Minutes Imprint: Random House Audio Genre: Political Science - Political Process - Campaigns & Elections Release Date: January 19, 2016
Why is America living in an age of profound economic inequality? Why, despite the desperate need to address climate change, have even modest environmental efforts been defeated again and again? Why have protections for employees been decimated? Why do hedge-fund billionaires pay a far lower tax rate than middle-class workers?
The conventional answer is that a popular uprising against “big government” led to the ascendancy of a broad-based conservative movement. But as Jane Mayer shows in this powerful, meticulously reported history, a network of exceedingly wealthy people with extreme libertarian views bankrolled a systematic, step-by-step plan to fundamentally alter the American political system.
The network has brought together some of the richest people on the planet. Their core beliefs—that taxes are a form of tyranny; that government oversight of business is an assault on freedom—are sincerely held. But these beliefs also advance their personal and corporate interests: Many of their companies have run afoul of federal pollution, worker safety, securities, and tax laws.
The chief figures in the network are Charles and David Koch, whose father made his fortune in part by building oil refineries in Stalin’s Russia and Hitler’s Germany. The patriarch later was a founding member of the John Birch Society, whose politics were so radical it believed Dwight Eisenhower was a communist. The brothers were schooled in a political philosophy that asserted the only role of government is to provide security and to enforce property rights.
When libertarian ideas proved decidedly unpopular with voters, the Koch brothers and their allies chose another path. If they pooled their vast resources, they could fund an interlocking array of organizations that could work in tandem to influence and ultimately control academic institutions, think tanks, the courts, statehouses, Congress, and, they hoped, the presidency. Richard Mellon Scaife, the mercurial heir to banking and oil fortunes, had the brilliant insight that most of their political activities could be written off as tax-deductible “philanthropy.”
These organizations were given innocuous names such as Americans for Prosperity. Funding sources were hidden whenever possible. This process reached its apotheosis with the allegedly populist Tea Party movement, abetted mightily by the Citizens United decision—a case conceived of by legal advocates funded by the network.
The political operatives the network employs are disciplined, smart, and at times ruthless. Mayer documents instances in which people affiliated with these groups hired private detectives to impugn whistle-blowers, journalists, and even government investigators. And their efforts have been remarkably successful. Libertarian views on taxes and regulation, once far outside the mainstream and still rejected by most Americans, are ascendant in the majority of state governments, the Supreme Court, and Congress. Meaningful environmental, labor, finance, and tax reforms have been stymied.
Jane Mayer spent five years conducting hundreds of interviews-including with several sources within the network-and scoured public records, private papers, and court proceedings in reporting this book. In a taut and utterly convincing narrative, she traces the byzantine trail of the billions of dollars spent by the network and provides vivid portraits of the colorful figures behind the new American oligarchy.
Dark Money is a book that must be read by anyone who cares about the future of American democracy.
Read More
ONE OF NEW YORK TIMES BOOK REVIEW'S TEN BEST BOOKS OF 2016

"Mayer is. . . a writer whose reporting can leave a reader breathless. . . . I urge you to read Dark Money."
—Bill Moyers

"Jane Mayer's Dark Money is utterly brilliant and chilling — no matter how much you think you already know. . . . Read it!"
—Naomi Klein, bestselling author of The Shock Doctrine: The Rise of Disaster Capitalism and This Changes Everything: Capitalism vs the Climate

“Jane Mayer’s Dark Money. . . is absolutely necessary reading for anyone who wants to make sense of our politics. Lay aside the endless punditry about Donald’s belligerence or Hillary’s ambition; Mayer is telling the epic story of America in our time. It is a triumph of investigative reporting, perhaps not surprising for a journalist who has won most of the awards her profession has to offer.... She’s a pro, and she’s given the world a full accounting of what had been a shadowy and largely unseen force. . . . Remarkable.”
—The New York Review of Books

"The book is written in straightforward and largely unemotional prose, but it reads as if conceived in quiet anger. Mayer believes that the Koch brothers and a small number of allied plutocrats have essentially hijacked American democracy, using their money not just to compete with their political adversaries, but to drown them out. . . . Dark Money emerges as an impressively reported and well-documented work. . . . The importance of Dark Money [flows] from its scope and perspective. . . . It is not easy to uncover the inner workings of an essentially secretive political establishment. Mayer has come as close to doing it as anyone is likely to come anytime soon. . . . She makes a formidable argument.”
­—From the cover of the New York Times Book Review

“Revelatory. . .persuasive, timely and necessary. . . . Only the most thoroughly documented, compendious account could do justice to the Kochs’ bizarre and Byzantine family history and the scale and scope of their influence.”
­—The New York Times 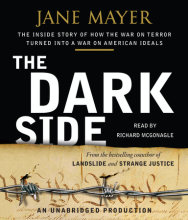