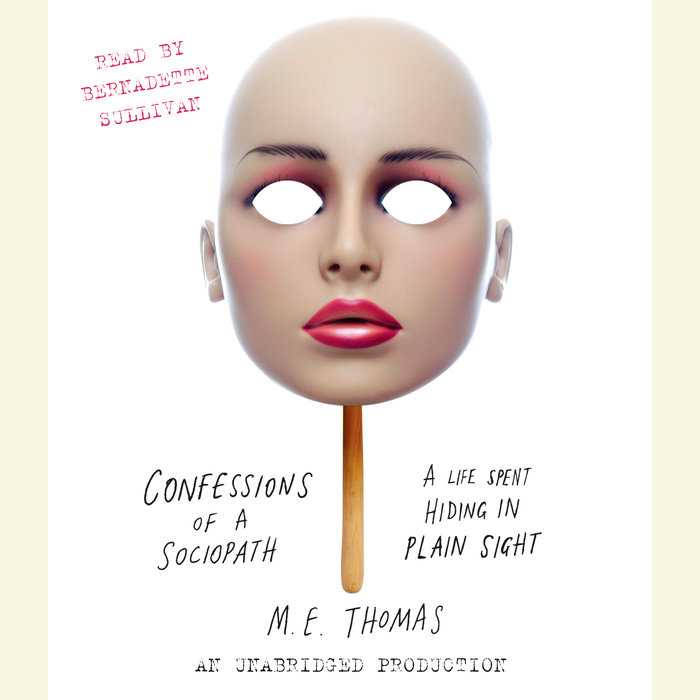 Written by: M.E. Thomas
Read by: Bernadette Sullivan
10 Hours and 10 Minutes Imprint: Random House Audio Genre: Biography & Autobiography - Personal Memoirs Release Date: May 14, 2013
Confessions of a Sociopath is both the memoir of a high-functioning, law-abiding (well, mostly) sociopath and a roadmap -- right from the source -- for dealing with the sociopath in your life.

As M.E. Thomas says of her fellow sociopaths, “We are your neighbors, your coworkers, and quite possibly the people closest to you: lovers, family, friends. Our risk-seeking behavior and general fearlessness are thrilling, our glibness and charm alluring. Our often quick wit and outside-the-box thinking make us appear intelligent—even brilliant. We climb the corporate ladder faster than the rest, and appear to have limitless self-confidence.  Who are we? We are highly successful, noncriminal sociopaths and we comprise 4 percent of the American population.”

Confessions of a Sociopath—part confessional memoir, part primer for the curious—takes readers on a journey into the mind of a sociopath, revealing what makes them tick while debunking myths about sociopathy and offering a road map for dealing with the sociopaths in your life. M. E. Thomas draws from her own experiences as a diagnosed sociopath; her popular blog, Sociopathworld.com; and scientific literature to unveil for the very first time these men and women who are “hiding in plain sight.”
Read More
Praise for Confessions of a Sociopath:

"[F]ascinating...part memoir, part psychological treatise, and entirely not to be trusted."—Boston Globe

"The goal of Confessions is to redefine sociopathy—or at least to shake off the stigma associated with it. And Thomas accomplishes both. Through her honest portrayal of herself as a highly capable yet deeply flawed individual, she demystifies her disorder."—Scientific American

"An essential, unprecedented memoir…intelligent, measured…[H]er arguments against using the diagnosis as an indicator of evil or a pre-emptive reason to imprison are a slam-dunk. This is a critical addition to narratives of mental illness, deepened by the awareness that we're reading someone whose most intense motivation is ‘acquisition, retention, and exploitation of power’.”—Publishers Weekly, starred review

"Fascinating and compelling as well as chilling, Thomas’ memoir offers a window into the mind of a portion of the population that usually remains shrouded in mystery and fear."—Booklist, starred review

"[Thomas] invites us into her courtroom, classroom and bedroom to witness how her behavior has stunted her work life and made her love life difficult....Much here is chilling, but there are also cracks that make you ache for her....A work of advocacy for greater awareness of sociopathy’s reach and conduct."—Kirkus Reviews