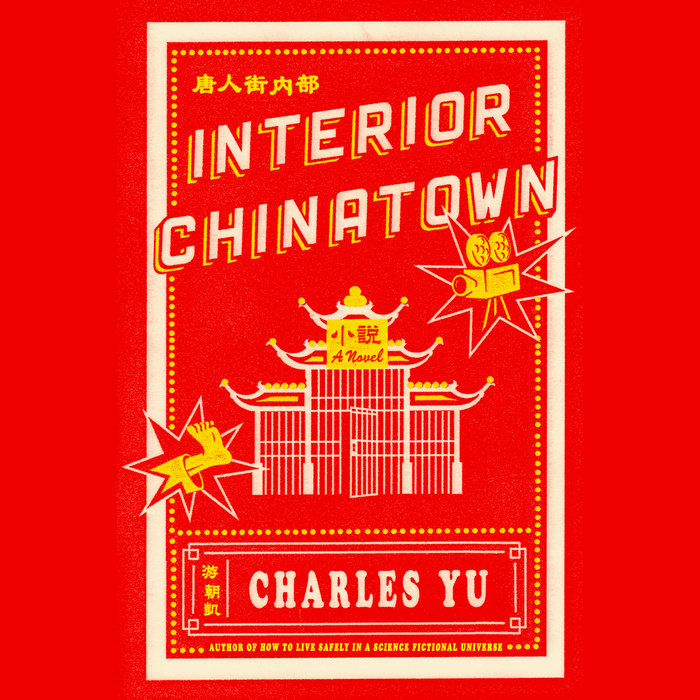 "One of the funniest books of the year ... a delicious, ambitious Hollywood satire." —The Washington Post

From the infinitely inventive author of How to Live Safely in a Science Fictional Universe comes a deeply personal novel about race, pop culture, immigration, assimilation, and escaping the roles we are forced to play.

Willis Wu doesn’t perceive himself as a protagonist even in his own life: He’s merely Generic Asian man. Sometimes he gets to be Background Oriental Making a Weird Face or even Disgraced Son, but he is always relegated to a prop. Yet every day he leaves his tiny room in a Chinatown SRO and enters the Golden Palace restaurant, where Black and White, a procedural cop show, is in perpetual production. He’s a bit player here, too, but he dreams of being Kung Fu Guy—the most respected role that anyone who looks like him can attain. At least that’s what he has been told, time and time again. Except by one person, his mother. Who says to him: Be more.

Playful but heartfelt, a send-up of Hollywood tropes and Asian stereotypes, Interior Chinatown is Charles Yu’s most moving, daring, and masterly novel yet.

"Fresh and beautiful ... Interior Chinatown represents yet another stellar destination in the journey of a sui generis author of seemingly limitless skill and ambition.” —The New York Times Book Review
Read More
“Interior Chinatown .... recalls the humorous and heartfelt short stories of George Saunders, the metafictional high jinks of Mark Leyner and films like ‘The Truman Show.’”
—Adam Sternbergh, The New York Times

“[Interior Chinatown] takes the theme of social roles beautifully sideways. The novel skewers pop-culture stereotypes of Asian Americans and contends, memorably, with assimilation . . . bold, even groundbreaking, in its form. It’s full of clever wordplay and in-jokes about the Chinese American experience . . . . marked by lacerating humor that blossoms into pathos. Like Percival Everett’s novel Erasure, its critique of race—from an Asian American perspective—cuts. However, acidic jokes are counterbalanced by palpable tenderness around family, parenthood and the human condition . . . . Interior Chinatown solders together mordant wit and melancholic whimsy to produce a moving exploration of race and assimilation that shouldn’t be missed by intellectually adventurous readers.”
— Anita Felicelli, San Francisco Chronicle

“[Interior Chinatown is] comedic. It’s literary. It’s weird and experimental . . . a kind of a George Saundersesque alternate reality. It’s all of those things, but maybe mostly, it’s allegory . . . The details meticulously crafted, render a universe that feels complete to the touch.”
—Pete Hsu, Los Angeles Review of Books

“I’m a big fan of Charles Yu’s writing because of his wit and inventiveness. These talents are front and center in the brilliant and hilarious Interior Chinatown, which satirizes the racist imagination and brings us deep into the humanity of those who suffer from—and struggle against—dehumanization.”
—Viet Thanh Nguyen, Pulitzer Prize-winning author of The Sympathizer

"Interior Chinatown is wrenching, hilarious, sharp, surreal, and above all, original. This is an extraordinary book by an immensely talented writer."
—Emily St. John Mandel, National Book Award finalist and author of The Glass Hotel

“Charles Yu plays with how we internalize stereotypes in the movies in this sometimes devastating, sometimes hilarious, but always captivating novel."
— Meghan Keane, NPR

"No one writes like Yu: he’s at once sincere and funny, his father-son narratives make me tear up, his work is science-fiction-but-not, and he’s always formally inventive. His new novel isn’t like anything else, either: it’s a novel that’s also a screenplay…or a screenplay that busts out of its form to be a novel."
—The Millions, “Most Anticipated: The Great First-Half 2020 Book Preview”

“Brilliantly unexpected and inventive, Interior Chinatown upended all the things I was sure I knew about the insidious power of stereotypes and left me feeling a little more hopeful for our collective future. Charles Yu’s writing is TRANSFORMATIVE.”
—Jade Chang, author of The Wangs vs. the World

“Inspired . . . [an] inventive drama about an Asian actor who dreams of becoming a star. . . . In spare but moving prose, [Yu] describes life among Asian Americans living as so-called foreigners [and] examines the history of bigotry against immigrants in the West for centuries. . . . An acid indictment of Asian stereotypes and a parable for outcasts feeling invisible in this fast-moving world.”
—Kirkus Reviews

“Charles Yu’s Interior Chinatown is a biting commentary on racism and pop culture in America, told in a form so original it will have readers questioning both the characters’ reality and their own. But at its heart, it’s also a moving family story of a man learning to be a son, brother, father, and partner in a world that treats him as barely human.”
—Anna North, author of The Life and Death of Sophie Stark

“I have long admired Charles Yu's daring and original fiction, and Interior Chinatown not only met my expectations—it exceeded them. I can't recall the last time I read a novel this inventive and surprising, and which wrestled with serious issues in such a playful manner. Yu is not afraid to take risks, and he somehow, magically—beautifully—makes those risks accessible. This book is smart and fun, comedic and sincere, thought provoking and impossible to put down. Yu is one of the most exciting writers telling stories today.”
—Edan Lepucki, author of Woman No. 17

“This is a hilarious book. You’ll laugh at the universe Charles Yu creates, kitty-corner to our own and just so off-kilter - and then, without warning, you’ll be pulled under by the riptide and everything will suddenly make beautiful, perfect, heartbreaking, unexplainable sense. In Interior Chinatown, Yu builds a world out of clichés and stereotypes, then finds a tiny hole in the back and slowly fills it with life and history and nuance and anguish and joy and desire and grief. There is no writer with a greater talent for taking the flattening indignities of life and exploding them into vibrant, poignant mythology.”
—Raphael Bob-Waksberg, creator of BoJack Horseman and author of Someone Who Will Love You in All Your Damaged Glory

“Most books are lucky to be either clever or deep, but Charles Yu’s new novel is both, and makes it look easy. Interior Chinatown is essential reading for anyone who’s obsessed with pop culture, identity, and all the ways that we’re all playing roles, all the time.”
—Charlie Jane Anders, author of The City in the Middle of the Night

“Interior Chinatown is a fascinating novel, hilarious and melancholy, a clever depiction of Hollywood dreaming itself and a sharp critique of the nature of those dreams. If it’s said that one of the reasons we watch films and television is out of a wish to ‘see ourselves,’ Yu adeptly raises the question of whether what we’re shown in response to that wish can ever be what we truly are.”
—Dexter Palmer, author of Mary Toft

“I devoured this novel. Yu masterfully orchestrates a heartbreaking and hilarious tale of race in America through the lens of the HOLLYWOOD ACTION MOVIE™. It’s an examination of how popcorn-flick pop culture shapes our understanding of each other, and tragically, our own self-definition as Americans and as human beings.”
—Daniel H. Wilson, author of The Clockwork Dynasty
Read More