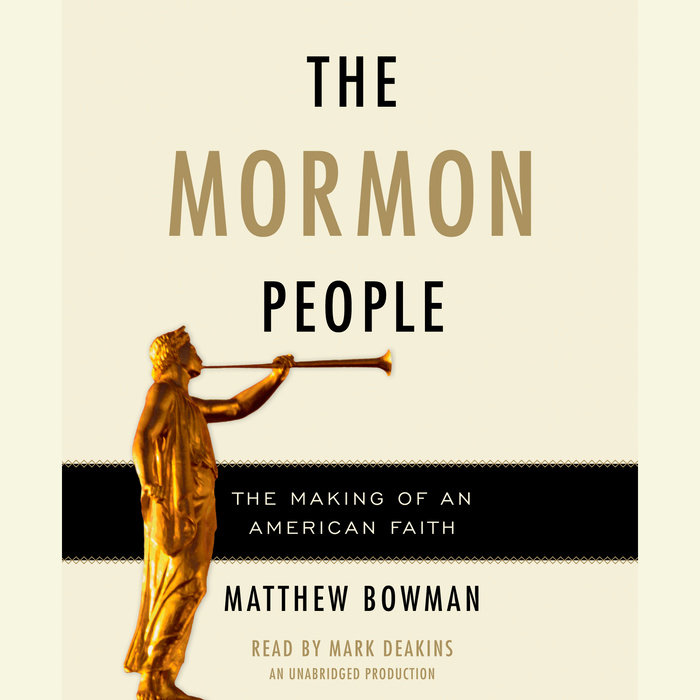 Written by: Matthew Bowman
Read by: Mark Deakins
11 Hours and 32 Minutes Imprint: Random House Audio Genre: Religion - Christianity - Church Of Jesus Christ Of Latter-Day Saints (Mormon) Release Date: January 24, 2012
With Mormonism on the verge of an unprecedented cultural and political breakthrough, an eminent scholar of American evangelicalism explores the history and reflects on the future of this native-born American faith and its connection to the life of the nation.

In 1830, a young seer and sometime treasure hunter named Joseph Smith began organizing adherents into a new religious community that would come to be called the Church of Jesus Christ of Latter-day Saints (and known informally as the Mormons). One of the nascent faith’s early initiates was a twenty-three-year-old Ohio farmer named Parley Pratt, the distant grandfather of Republican presidential candidate Mitt Romney. In The Mormon People, religious historian Matthew Bowman peels back the curtain on more than 180 years of Mormon history and doctrine. He recounts the church’s origin and development, explains how Mormonism came to be one of the fastest-growing religions in the world by the turn of twenty-first-century, and ably sets the scene for a 2012 presidential election that has the potential to mark a major turning point in the way this “all-American” faith is perceived by the wider American public—and internationally.

Mormonism started as a radical movement, with a profoundly transformative vision of American society that was rooted in a form of Christian socialism. Over the ensuing centuries, Bowman demonstrates, that vision has evolved—and with it the esteem in which Mormons have been held in the eyes of their countrymen. Admired on the one hand as hardworking paragons of family values, Mormons have also been derided as oddballs and persecuted as polygamists, heretics, and zealots clad in “magic underwear.” Even today, the place of Mormonism in public life continues to generate heated debate on both sides of the political divide. Polls show widespread unease at the prospect of a Mormon president. Yet the faith has never been more popular. Today there are about 14 million Mormons in the world, fewer than half of whom live inside the United States. It is a church with a powerful sense of its own identity and an uneasy sense of its relationship with the main line of American culture.

Mormons will surely play an even greater role in American civic life in the years ahead. In such a time, The Mormon People comes as a vital addition to the corpus of American religious history—a frank and fair-minded demystification of a faith that remains a mystery for many.
Read More

Advance praise for The Mormon People

“The Mormon church has never been more important in American politics. In this smart, lucid history of the faith, Matthew Bowman explains a religion that many Americans don’t understand but should. With Mitt Romney and Jon Huntsman in the race, this is essential reading for anyone interested in 2012 and beyond.”—Tom Brokaw, author of The Time of Our Lives: A Conversation About America

“Matthew Bowman has brought us a cogent, judicious, and important account of a faith that has been an important element in American history but remained surprisingly misunderstood.”—Michael Beschloss, author of Presidential Courage: Brave Leaders and How They Changed America, 1789–1989

“What do Mormons stand for? Are they quintessential good citizens or troubling religious deviants? Why are Mormons running for president? Matthew Bowman offers a quick, lively, and informative trip into the heart of Mormonism. All who are concerned or just curious will learn a lot about the making of modern Mormons from this book.”—Richard Lyman Bushman, author of Joseph Smith: Rough Stone Rolling